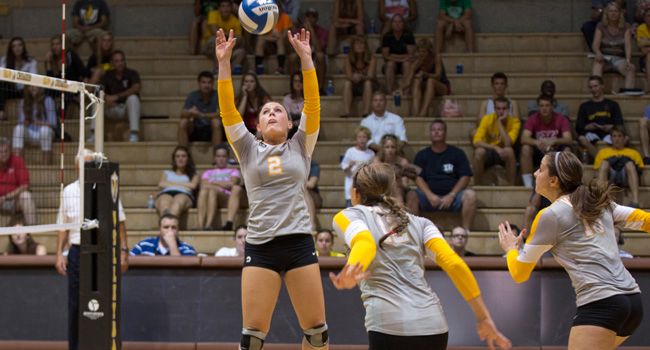 This Week in Crusader Volleyball: Valparaiso returns home for the final time this season as it hosts a pair of Horizon League matches. Friday afternoon, Cleveland State comes to town for a 4 p.m. first serve. Then, the Crusaders will celebrate Senior Day on Saturday afternoon, again slated for a 4 p.m. start against Youngstown State.

Previously: Valpo dealt Milwaukee its first loss in Horizon League play last Friday evening, downing the Panthers in Milwaukee, 3-1. The Crusaders could not make it a weekend sweep, however, falling 3-2 to Green Bay the next evening.

Head Coach Carin Avery: In her 12th season as head coach at Valpo, Carin Avery has won 284 matches and has led Valpo to three league regular season and tournament titles, as well as three NCAA Tournament appearances. A two-time league Coach of the Year, Avery has coached 37 All-League recipients over her tenure as Crusader head coach. She is Valpo’s all-time leader in both victories and winning percentage, and owns 339 total career victories in her 14th season overall as a head coach.

Series Notes: CSU - The Crusaders own a 16-13 advantage over the Vikings in the all-time series, and snapped a four-match losing streak to CSU earlier this year with a five-set win on the road. Ellen Vanden Berg posted a season-best 10 blocks in that win.
YSU - Valpo owns a 22-6 lead in the all-time series over the Penguins and have defeated YSU 12 straight times, including a straight-set victory in Youngstown this season. Morgan Beil hit .667 with 14 kills and Vanden Berg .478 with 12 kills to lead the way against the Penguins.

Scouting the Opposition: CSU - The Vikings enter this weekend 13-10 overall, but just 3-7 in HL play. Maggie Hannon leads the CSU offense with 2.99 kills/set on .356 hitting, while Nikki Holmes averages 4.60 digs/set.
YSU - The Penguins are 14-11 overall and 6-4 in league play, and will play at UIC on Friday before taking on the Crusaders. Missy Hundelt posts a team-best 3.06 kills/set, while three YSU players average better than a block per set, led by a league-high 1.49 bps from Jenna Cavanaugh.

The League Race: Valpo was briefly tied with Milwaukee in the loss column in the league standings prior to Saturday’s loss at Green Bay, which knocked the Crusaders a game back of the Panthers. Milwaukee would also likely hold the tiebreaker between the two squads as well should they end up tied. With a pair of wins this weekend, Valpo would ensure itself of at worst a 10-4 league record and almost assuredly would secure the #2 seed for the league tournament and the bye into the tournament semifinals.

Senior Class: The Crusaders will honor their five-player senior class prior to Saturday afternoon’s game against Youngstown State. Sarah Chrabaszcz, Ariel Cudney, Sarah Dooms, Janelle Hobbs and Ellen Vanden Berg have helped lead Valpo to 90 wins and counting over their four-year careers, including wins over Big Ten teams each of the last two seasons and six in-season tournament championships.

Record Book Watch (Single Season): With the season winding to a close, a few Crusaders are also taking runs at cracking the program’s single-season top-10 lists. Ellen Vanden Berg has already tallied 124 blocks, two shy of the top-10 and just six rejections shy of eighth place. Morgan Beil is hitting at a .293 clip so far this year, a mark which would rank in the Crusaders’ single-season top-five. Meanwhile, Morganne Longoria finds herself 82 digs shy in that category, a mark easily attainable with at least five matches remaining. As a team, Valpo has tallied 253 blocks this year, 17 shy of the top-10 and just 31 away from fifth place.