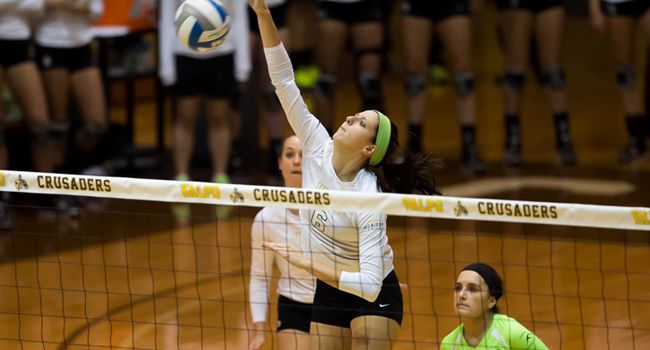 Sharp execution on both sides of the ball led to a 3-0 (28-26, 25-21, 25-17) victory for the Valparaiso volleyball team over Cleveland State in Horizon League action at the ARC Friday afternoon.

Then defensively, Valpo continued its strong play at the net, registering 12.5 total team blocks in the sweep of the Vikings. As she has over the last few weeks, Vanden Berg was the leader on the block, tallying six rejections, while senior right side Janelle Hobbs (Hartland, Wis./Arrowhead) and redshirt junior right side Kelsey Victor (Logansport, Ind./Logansport) each recorded five blocks.

When the ball did get through the block, the Crusader back line, led by the play of freshman Morganne Longoria (Burlington, Wis./Burlington) was there to pick it up. Longoria tallied 25 digs in the three-set win as the Crusaders totaled 57 digs on the match, limiting Cleveland State to just a .120 attack percentage.

"We worked a lot this week on our offense, so it was nice to see us hit at such a high percentage for the match," said Crusader head coach Carin Avery. "Then defensively, we talked this week about how improving both our blocking and our digging correlate to winning. Even though we started out a bit slow today, I felt we did a great all-around job from the late stages of the first set all the way through the end of the match."

Valpo took a while to get started on Friday, as the Vikings led most of the first set and were actually up 21-16 late. An 8-2 run gave the Crusaders set point at 24-23, but CSU saved that chance, and following a kill by freshman Rachel Bruinsma (New Era, Mich./Western Michigan Christian), the Vikings staved off another set point, and then claimed the lead at 26-25.

Vanden Berg stepped up with a big kill out of the middle to make it 26-all and keep the opening frame going, and then the Crusader block made its presence felt to close out the set. First it was Vanden Berg and Bruinsma combining on a rejection to give Valpo its third set point chance, and the senior from Little Chute then paired with Hobbs on a big block to make it 1-0 Crusaders.

The second set saw the Crusaders maintain a slim lead entering the late stages, as Valpo led just 19-18 before a four-point spurt put it out of reach. Victor and freshman Emily Campbell (Grand Rapids, Mich./Forest Hills Central) each had kills during the run, while Victor and Vanden Berg were both in on blocks for the other two points as well. A termination by Vanden Berg eventually ended the set, sending Valpo into the in-game break up 2-0.

Cleveland State led early in set three, but that didn't last long, as senior Ariel Cudney (LaPorte, Ind./LaPorte) stepped back and served during a 7-0 Crusader run that gave Valpo the lead for good at 11-5. Fittingly enough, the match would end on one last block from Vanden Berg and Victor.

Valparaiso (23-5, 9-2 Horizon) will honor its five-player senior class on Saturday afternoon on Senior Day at the ARC. First serve is slated for 4 p.m. against Youngstown State, and all the action can be seen live on the Horizon League Network. Links for the live video, as well as live stats, will be available at ValpoAthletics.com.