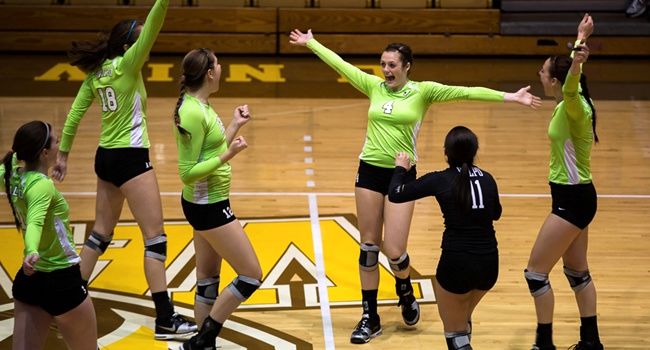 The Valparaiso volleyball program celebrated the careers of its five-player senior class as part of Senior Day ceremonies prior to its match against Youngstown State at the ARC Saturday afternoon, but the Crusaders were unable to come out with the victory once the match got underway, falling to the Penguins 3-2 (25-18, 18-25, 25-21, 16-25, 15-11).

The Crusaders’ five seniors – Sarah Chrabaszcz, Ariel Cudney, Sarah Dooms, Janelle Hobbs and Ellen Vanden Berg – were honored prior to the contest.  The quintet has helped lead Valpo to 91 victories over their four-year careers.  Included among the wins are victories each of the last two years over Big Ten programs, the first-such wins in program history, and six in-season tournament titles.

After a slow start both ways to the opening set, Valpo led 16-14 just past the midway stage.  But the Crusaders committed six errors over the remainder of the frame as YSU closed the set on an 11-2 run to take the opener.  Valpo rebounded in the second set, as after a 19-13 lead was cut to 19-17, the Crusaders responded with five straight points, including three consecutive kills by Emily Campbell (Grand Rapids, Mich./Forest Hills Central), and a kill by Morgan Beil (St. Louis, Mo./Marquette) sent the match into the in-game break tied at one set apiece.

The third set saw the two teams trade early runs before Youngstown State looked to seize control past the halfway point.  The Crusaders fought back to tie the set at 16-all, but the Penguins scored five of the next six points and kept Valpo at bay from there.  The fourth set was knotted up at 13 apiece at the halfway mark before the Crusaders scored 12 of the final 15 points to send the match to a decisive fifth set.

The Crusaders were never able to move into even a tie for the lead in the fifth set, however, as Youngstown State scored the first five points of the set.  Valpo did rally, scoring seven of the next ten points, to close within 8-7.  But after trading sideouts, the Penguins scored three straight to gain breathing room, and the Crusaders were unable to put together a run in the late stages of the frame.

The Crusader service game was strong on Saturday, as Valpo totaled 10 service aces over the five sets.  Berrington matched her career best with four aces, while Dooms tied her season high with three.  On the back line, Morganne Longoria (Burlington, Wis./Burlington) led all players with 30 digs, matching her career best, while Berrington tallied 16 digs and Cudney 15 as both setters picked up double-doubles.

Alexis Egler led Youngstown State (15-12, 7-5 Horizon) with a match-high 17 kills and also picked up 22 digs.  Nicole Johnson added 12 kills on .346 hitting in the winning effort, while Jenna Cavanaugh led the Penguins at the net with seven blocks.

Valparaiso (23-6, 9-3 Horizon) closes out regular season action on the road next weekend, starting with a Friday night match at Wright State.  First serve is slated for 6 p.m. CT, with live video through the Horizon League Network and live stats available at ValpoAthletics.com.