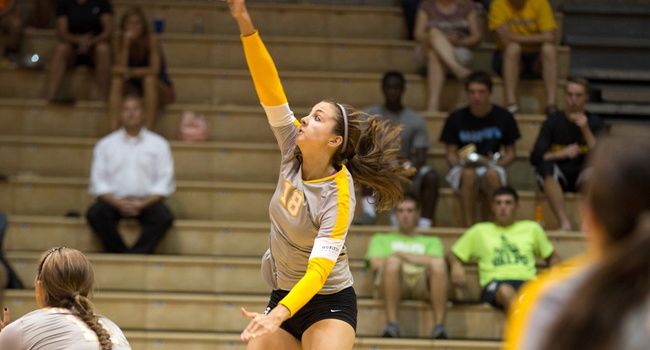 This Week in Crusader Volleyball: Valparaiso looks to secure the #2 seed for the upcoming Horizon League Championship this weekend as the Crusaders close out the regular season at Wright State and Oakland in 3 p.m. CT matchups Friday and Saturday. Valpo will clinch the second seed with one victory.

Previously: Valpo closed out its home slate last weekend at the ARC, sweeping Cleveland State in three sets before falling to Youngstown State in a hard-fought five-set battle. The split of the final home weekend gave Valpo a 9-2 record at the ARC this season.

Head Coach Carin Avery: In her 12th season as head coach at Valpo, Carin Avery has won 285 matches and has led Valpo to three league regular season and tournament titles, as well as three NCAA Tournament appearances. A two-time league Coach of the Year, Avery has coached 37 All-League recipients over her tenure as Crusader head coach. She is Valpo’s all-time leader in both victories and winning percentage, and owns 340 total career victories in her 14th season overall as a head coach.

Series Notes: Wright State - The Crusaders hold a slight 15-14 edge in the all-time series over the Raiders, but Valpo has won 11 consecutive matchups. Most recently, the Crusaders earned a 3-0 victory at the ARC against WSU earlier this season, led by a seven-kill, six-block effort from Ellen Vanden Berg.
Oakland - Valpo is 18-3 all-time against the Horizon League newcomers, including a win earlier this year at the ARC, 3-1. Sarah Dooms hit .364 with 18 kills in that win and surpassed 1,000 career kills in the match.

Scouting the Opposition: WSU - The Raiders enter the weekend at 6-24 overall and are in search of their first Horizon League win. Heidi Splinter leads WSU with 2.88 kills/set and also averages 2.77 digs/set.
Oakland - The Golden Grizzlies are 13-14 overall and 7-5 in league play entering this weekend and will take on UIC Friday evening. Four different Oakland players average at least two kills/set, led by 2.90 kps from Cassie Pelloni. Amanda Baker and Brooke Wadsworth both are just shy of 100 blocks on the season.

The League Race: Valpo still has a very outside shot of sharing the league regular season title with Milwaukee should the Crusaders win two matches and Milwaukee lose both this weekend, but the Panthers would still be the tournament host and #1 seed via tiebreaker. Valpo clinches outright second place with at least one win this weekend, which assures it of a bye into the tournament semifinals. It would mark the Crusaders’ fourth second-place finish since joining the Horizon League (2008, 2009, 2012).

Just Win, Baby, Win: Valpo enters the final weekend of regular season play already with 23 wins on the year, poised to possibly finish with one of the winningest seasons in program history. A pair of wins this weekend would give the Crusaders 25 victories, matching the 2008 team’s total number of wins for the second-most since Valpo joined the Horizon League. Only the 2010 team (27 wins) has won more matches since the Crusaders swapped leagues.

Record Book Watch (Single Season): With the season winding to a close, a few Crusaders are also taking runs at cracking the program’s single-season top-10 lists. Ellen Vanden Berg has already tallied 131 blocks, eighth-most in a single season and two shy of seventh position. Morgan Beil is hitting at a .287 clip so far this year, a mark which would rank sixth on the Crusaders’ single-season chart. Meanwhile, Morganne Longoria finds herself 27 digs shy in that category, a mark easily attainable with at least three matches remaining. As a team, Valpo has tallied 270.5 blocks on the season, tenth-most in a single season and just 13.5 rejections shy of fifth place.