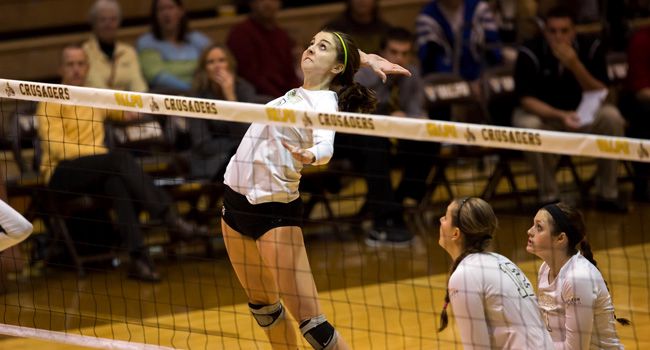 Valparaiso volleyball senior Janelle Hobbs (Hartland, Wis./Arrowhead) was skipped during the introduction of starting lineups prior to Friday afternoon's match at Wright State, but Hobbs got the last laugh, putting together a career performance to lead the Crusaders as they downed the Raiders, 3-1 (27-25, 25-23, 23-25, 25-18). With the win, Valpo secured outright second place in the Horizon League and the second seed in the upcoming league tournament.

Hobbs matched her career best with 17 kills in the victory, more than doubling her previous season high. The senior right side also was efficient with her attacks, putting down the 17 kills on just 28 swings and committing just one attack error to hit at a tremendous .571 clip. Hobbs missed by just five percentage points cracking Valpo's all-time top-five hitting percentages in a four-set match. Hobbs wasn't the only Crusader to enjoy a stellar match on the attack, as senior middle Ellen Vanden Berg (Little Chute, Wis./Little Chute) backed her up with 13 kills on .407 hitting as well.

The victory would not come easily for Valpo, as each of the first three sets went right down to the wire. The Crusaders led 14-12 in the opener before an 8-0 run from the Raiders gave them a commanding 20-14 lead. Trailing 23-18, Valpo got two kills from Vanden Berg and one from Hobbs to close within two points, but an attack error gave Wright State three set points at 24-21.

Back-to-back Raider errors gave the Crusaders life, and a kill from Hobbs tied the frame at 24-all and forced extra points. WSU's Stephanie Ruffing posted a kill for a fourth set point opportunity, but Vanden Berg fought that off with another termination. Then, sophomore Kelsey Berrington (Britton, Mich./Tecumseh) perfectly executed a setter dump for a kill, giving Valpo its first set point chance at 26-25, and the Crusaders claimed the opener on a WSU attack error.

Valpo looked to have the second set under control after an 8-3 spurt gave the Crusaders a 19-14 edge, but Wright State fought back with five straight points to tie things up. The Raiders would claim a pair of one-point leads late in the frame, the latest coming at 23-22, but the Crusaders found kills from Vanden Berg, Hobbs and junior Morgan Beil (St. Louis, Mo./Marquette) to end the set with three straight points and head into the in-game break up two sets to none.

Valpo scored the first four points of the third set, but the Raiders would come from behind and claim their first lead at 11-10. The teams went back and forth, as Wright State led late at 21-18 before three straight Crusader points tied it at 21 apiece. But the Raiders scored the next two points and the teams then traded sideouts the rest of the way as the match extended into a fourth set. The fourth frame would be all Valpo, however, as after WSU rallied from an early 5-1 Crusader lead to tie it at 7-7, the Crusaders scored nine of the next 11 points to take control for good.

Valpo hit .242 for the match with 60 kills as a team, as Berrington handed out 30 assists and senior Ariel Cudney (LaPorte, Ind./LaPorte) tallied 16 assists. On the defensive side, freshman Morganne Longoria (Burlington, Wis./Burlington) led the way for the Crusaders in the back row with 21 digs, while Berrington registered a double-double by picking up 11 digs as well. At the net, Vanden Berg paced Valpo with seven blocks, as the Crusaders totaled 10 team blocks.

Valparaiso (24-6, 10-3 Horizon) closes out the regular season Saturday afternoon at Oakland. First serve is set for 3 p.m., with live video through the Horizon League Network and live stats available at ValpoAthletics.com.