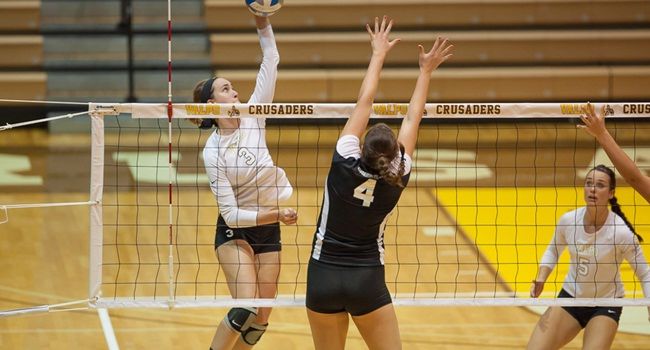 Valparaiso and Milwaukee split the first two sets Sunday afternoon in the Horizon League championship match in Milwaukee, Wis., but the Panthers took sets three and four to earn a 3-1 victory over the Crusaders and the tournament title.  Senior Ellen Vanden Berg (Little Chute, Wis./Little Chute) and junior Morgan Beil (St. Louis, Mo./Marquette)  represented the Crusaders on the All-Tournament Team.

The first set saw the Panthers get off to a quick start, scoring seven of the first nine points before a three-point spurt by the Crusaders brought them back to within 7-5.  Valpo would play from behind the whole set, keeping Milwaukee within striking distance.  In fact, four times the Crusaders closed to within one point (17-16, 18-17, 20-19, 21-20), but all four times the Panthers sided out.  The last side out started a 4-0 run which gave the Panthers the opener.

Milwaukee opened the second set with a 3-1 lead, but the Crusaders answered with six straight points, including a pair of kills by senior Janelle Hobbs (Hartland, Wis./Arrowhead), to take a 7-3 lead.  Milwaukee rallied to tie the set at 11-all, but Valpo responded with four consecutive points, including a pair of blocks, to go ahead 15-11.  Much like the first set, the Panthers would close to within one point a number of times, including each of the last five points of the set, but each time the Crusaders would side out, the last coming on a block by Hobbs and Vanden Berg, to send the match into the in-game break tied at one set apiece.

Valpo led briefly early in the third set, but the Panthers used a 9-3 run to go ahead 11-6.  The Crusaders moved within two points twice – at 13-11 off a Milwaukee hitting error and at 17-15 on a kill from freshman Emily Campbell (Grand Rapids, Mich./Forest Hills Central) – but both times, the Panthers responded with multiple points in a row.  Trailing 21-16 late, Valpo made one last push, as a block from Vanden Berg and Hobbs and a Milwaukee error brought the Crusaders within three before the Panthers scored three straight.  Milwaukee eventually took the third set on its third set point chance, taking a 2-1 lead in the match.

The fourth set started much the same as the third, as the Crusaders led extremely early before Milwaukee put together a 6-1 run to take the lead for good.  Trailing by six points at 17-11, kills from Beil and redshirt junior Kelsey Victor (Logansport, Ind./Logansport) were part of a three-point spurt that brought Valpo back within 17-14.  The Panthers responded with four of the next five points, but the Crusaders again put together three straight points, as Vanden Berg posted two kills and combined with Campbell on a block, to cut the deficit to 21-18.  Following a timeout, however, Milwaukee scored the final four points of the set to earn the tournament championship and the league’s automatic bid to the NCAA Tournament.

“I think right from the start today, Milwaukee was in a much better flow than we were in every aspect of the game,” said Crusader head coach Carin Avery.  “It seemed like all match, we were trying to catch up, and then every time we got some momentum, we would make an error and allow Milwaukee to go on a run.  We definitely did not play as well as we could have tonight, but I thought Milwaukee played extremely well.”

Beil led Valpo on Sunday with 12 kills and did not commit an attack error, hitting at a .462 clip for the match.  Vanden Berg ended the match in double figures with 10 kills as well, while leading the Crusaders defensively at the net with six blocks.  Sophomore Kelsey Berrington (Britton, Mich./Tecumseh) and senior Ariel Cudney (LaPorte, Ind./LaPorte) handed out 24 and 20 assists, respectively.  Freshman Morganne Longoria (Burlington, Wis./Burlington) led the back row with 17 digs, while senior Sarah Dooms (Greenwood, Ind./Center Grove) chipped in 13 digs.  Hobbs added five blocks as well.

Milwaukee (18-10) featured a balanced offense on Sunday, as four different Panthers ended the match with at least 11 kills.  Tournament MVP Maggie Dunbar and Julie Kolinske tied for match-high honors with 14 kills, the former swinging at a .305 clip.  Taylor Golabowski led all players with 22 digs.  At the net, Milwaukee registered 16 total team blocks, led by nine from Nicole Latzig.

The loss ends Valparaiso’s 2013 season at 25-8, matching the fifth-most wins in a single season in program history.  As a team, the Crusaders registered 304.5 blocks on the season, fourth-most in program history.  Individually, Beil’s hitting percentage of .296 ranks fourth in a single season, while Vanden Berg totaled 152 blocks, fourth-most in a single season and the most by anybody other than Liz Mikos.  Longoria cracked the Crusaders’ single-season top-ten in digs as well, moving into ninth position with 569 digs as a freshman.

“You can look at this season like we lost the championship, but we had an outstanding year,” said Avery.  “Our record speaks for itself - we won a ton of matches this year, something which is tough to do in Division I athletics, and that can’t be taken away from this group.”

The loss also closes out the careers of five Crusader seniors: Sarah Chrabaszcz (Reedsburg, Wis./Reedsburg Area), Cudney, Dooms, Hobbs and Vanden Berg.  The quintet helped Valpo to 93 victories over their four years, including wins over Big Ten teams in each of their last two seasons and six in-season tournament championships.

Cudney finishes out her career tied for third on Valpo’s career service aces chart, registering her 140th ace on Sunday.  Dooms ends her career second in Crusader history in career attacks (3,857), seventh in kills (1,134) and fourth in digs (1,653 – the top-ranked non-libero on the chart).  Vanden Berg finishes her time at Valpo third in career blocks (421), fourth in hitting percentage (.257) and tied for eighth in solo blocks (50).

“Our seniors have given so much of themselves to our program and to the university over the last four years,” said Avery.  “I feel bad for them that they weren’t ever able to win a championship, but they did so many fun things.  We pride ourselves as a program in being a family, and this senior class has done a great job leading us in that regard.  I tell them that you won’t necessarily remember the trophies in five years, but you do remember family, and they have been great members of this family over their time here.  It’s really sad to see this group leave.”