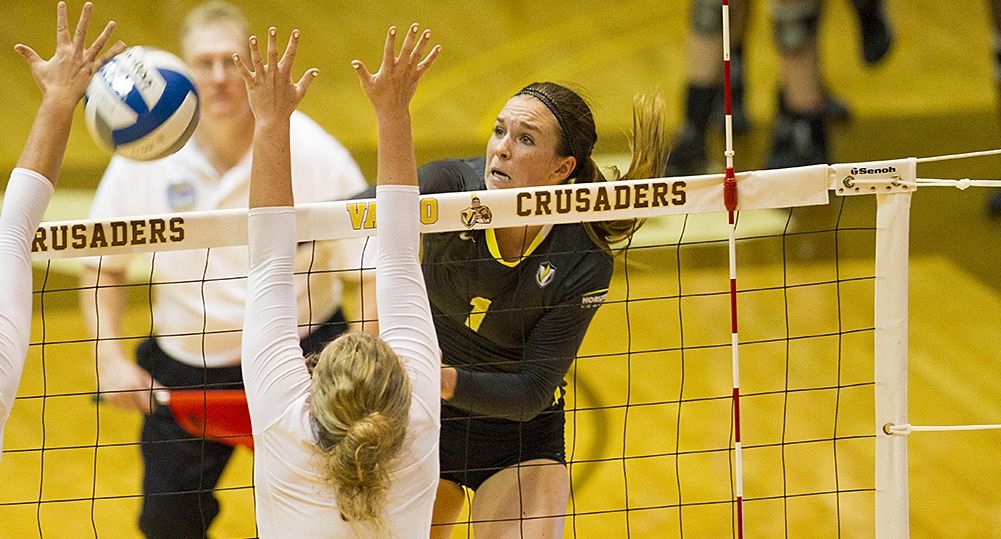 “We’ve played IUPUI every year since I’ve been here, and I feel like every single match against them has gone five sets – it’s such a competitive rivalry,” said Crusader head coach Carin Avery.  “It’s great for us to play a team like IUPUI at this point in the season, a team that went to the NCAA Tournament last year and a team similar to the ones we’ll see in the Horizon League.  The match tonight was a bit of a roller coaster ride, but I thought we did a very good job taking care of the ball down the stretch when we needed to.  We had a lot of people step up at very crucial times, and that was great to see.”

The Crusaders hit just .150 over the first three sets Wednesday, dropping the first and third frames to fall behind the Jaguars, 2-1.  But they turned it around in the fourth set, registering 15 kills on just 27 swings and hitting at a .481 clip to send the match to a decisive fifth frame.  Then, in the final set, Valpo committed just one attack error and hit .292 in securing the win.

Leading the offensive charge Wednesday was sophomore Emily Campbell (Grand Rapids, Mich./Forest Hills Central), who registered a new career best with 22 kills and hit .273 on the night.  Campbell was the main impetus behind the turnaround offensively in the final two sets, registering an amazing nine kills on just ten swings in the fourth set and posting three kills in the fifth set as well.

Defensively, sophomore Morganne Longoria (Burlington, Wis./Burlington) tallied a match-best 30 digs, matching her all-time high in the category for the third time in her career.  She had plenty of help in the back though, as the Crusaders totaled 95 digs and held IUPUI to .156 hitting.  Berrington recorded 17 digs, ending the night with her third double-double of the campaign.  Sophomore Rachel Bruinsma (New Era, Mich./Western Michigan Christian) tied her career high as well with 14 digs, while Campbell rounded out the quartet in double figures with 12 digs.

At the net, the Crusaders recorded 11 blocks as a team on Wednesday, paced by six rejections from freshman Taylor Graboski (Upper Sandusky, Ohio/Upper Sandusky).  Victor was in on four of Valpo’s blocks, while Berrington and freshman Allison Ketcham (Mishawaka, Ind./Marian) each chipped in on three as well.

Valparaiso (3-1) continues early-season play this weekend at the Jackrabbit Invitational in Brookings, S.D.  The tournament kicks off for the Crusaders with a pair of matches on Friday, as they face UMKC at 10 a.m. and Stephen F. Austin at 5 p.m.