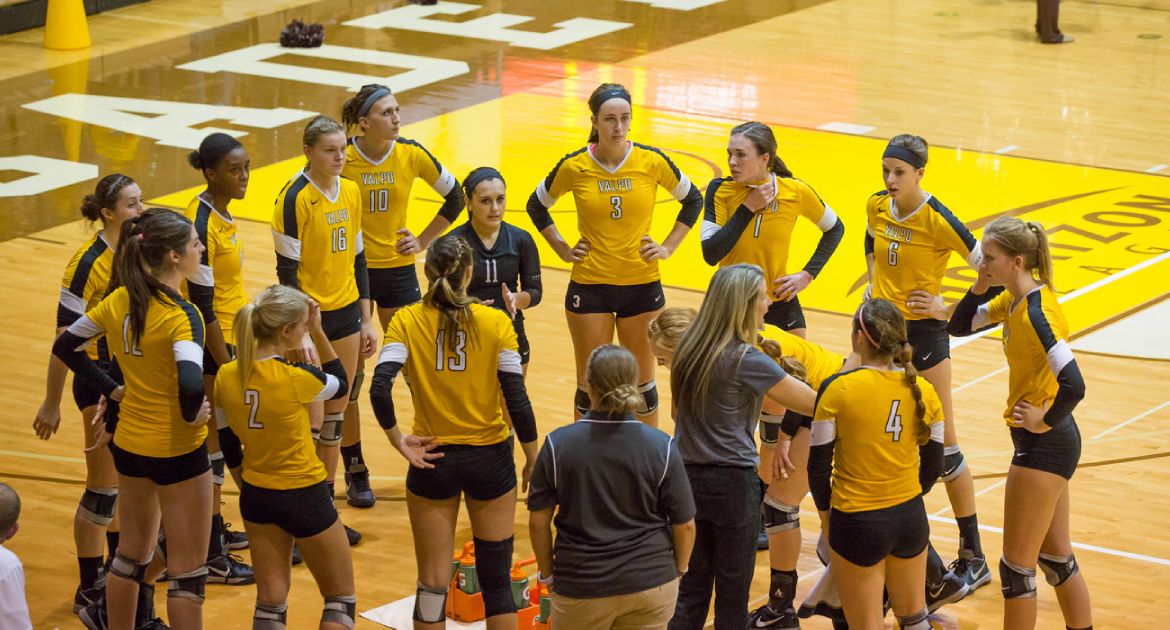 This Week in Crusader Volleyball: The Valparaiso volleyball team carries a 12-match winning streak into the start of Horizon League play this weekend.  The Crusaders begin the league slate at Green Bay Friday evening before looking to gain revenge for last year’s Horizon League Championship loss at Milwaukee on Saturday afternoon.

Following the Crusaders: Live video through the Horizon League Network will be available for both matches this weekend, with links for the live video and live stats available at ValpoAthletics.com.  HLN will carry free live video of each of the Crusaders' league matches and all home non-league matches, while select matches will be covered by Valpo's student radio station, WVUR [95.1, Valparaiso], as well. In addition, most matches will have live stats available online.

Head Coach Carin Avery: In her 13th season as head coach at Valparaiso, Carin Avery has won 299 matches and has led Valpo to three league regular season and tournament titles, as well as three NCAA Tournament appearances. A two-time league Coach of the Year, Avery has coached 40 All-League recipients over her tenure as Crusader head coach. She is Valpo’s all-time leader in both victories and winning percentage, and owns 354 career victories overall as a head coach.

Series Notes:  Green Bay – Valpo owns a 21-10 edge in the all-time series over the Phoenix, but the two teams split a pair of five-set matches last season, with each squad winning on its home court.  The Crusaders have dropped two of their last three contests at Green Bay.

Milwaukee – A back-and-forth series between two of the league’s premier programs, the Crusaders trail the Panthers all-time 20-16.  Valpo claimed both matchups two seasons ago, but last year, Milwaukee took two of three, including the Horizon League Championship match.

Scouting the Opposition: Green Bay – The Phoenix enter Horizon League play at 2-9 on the season, most recently dropping a pair of matches to Ohio and Northwestern at the Wildcat Invitational.  Taylor Kasal leads Green Bay with 2.45 kills/set, but is hitting just .073 on the season.  Jillian Bauer paces the Phoenix in the back row with 4.53 digs/set.

Milwaukee – The Panthers have played a tough early-season schedule, including two ranked foes and two others receiving votes nationally, and enter the weekend at 5-8 on the year.  Last season’s league champions are led by Julie Kolinske, who averages 3.95 kills/set on .272 hitting, while Hannah Blanchard adds 2.78 kills/set on .262 hitting.

I’ll Take a Dozen Wins: The victories over Murray State, Sacramento State and George Washington extended the Crusaders’ winning streak to 12 straight matches, as Valpo has not fallen since the second match of the season.  It is the fifth time in program history that the Crusaders have won at least 10 consecutive times, and the tournament-clinching victory over the Colonials moved the winning streak to the third longest all-time at Valpo.  Only the 2008 (13 straight) and 2004 (14 straight) teams can boast longer winning streaks.

Best Start: The Crusader volleyball team has never gone this deep into a season before sustaining its second loss.  Previously, the 2010 team started off 11-1 before suffering its second defeat.

Trio of Titles: Capturing the Crusader Crossroads of America Classic last weekend gave Valpo a third consecutive in-season tournament title and continued a tradition of picking up hardware early in the season.  The triumph was Valpo’s 20th tournament victory in the 13-year tenure of head coach Carin Avery.  The Crusaders have now brought home at least one in-season championship in 10 of the last 13 years, and have captured multiple titles in seven of those seasons.  This year’s three titles match the 2006 and 2010 teams for most championships in a single season.

Done in Three: If it seemed unusual to see the Crusaders trailing after the opening set against Murray State, that’s because it was an aberration.  The first-set loss to the Racers marks the only set Valpo has dropped in its last eight matches.  Overall this season, the Crusaders have lost just 10 sets in their 14 matches.

Spread Around the Honors: Freshman Allison Ketcham claimed Tournament MVP honors last weekend and was joined on the All-Tournament Team by seniors Morgan Beil and Kelsey Victor, continuing the run of honors for the Crusaders at early-season tournaments.  Seven different Crusaders have earned All-Tournament accolades this year, four of them receiving multiple awards.  Ketcham joins Kelsey Berrington (Jackrabbit Invitational) and Emily Campbell (Skyhawk Invitational) as Valpo players who have been tournament MVPs this season.

Raking In League Awards: Ketcham made it back-to-back Horizon League Players of the Week for Valpo, as she claimed Defensive Player of the Week honors for her performance last weekend.  The freshman posted a tournament-high 5.50 digs/set over the Crusaders’ three wins, highlighted by a career-best 26 digs in the win over Murray State.  She also tallied 51 serve receptions over the trio of wins without committing a serve receive error.  Ketcham also contributed offensively to the Crusaders’ success as well, hitting .253 with 2.90 kills/set and posting two double-doubles.

Crusader Milestones: Last Saturday morning against Sacramento State, junior Kelsey Berrington handed out the 2,000th assist of her Crusader career, making her one of just nine players to reach 2,000 assists at Valpo.  Heading into this week, senior Morgan Beil boasts 967 career kills, 33 terminations shy of becoming the 14th player in Crusader history to reach four figures in kills.  Also, senior Kelsey Victor has registered 285 blocks in her career, leaving her just 15 shy of 300.