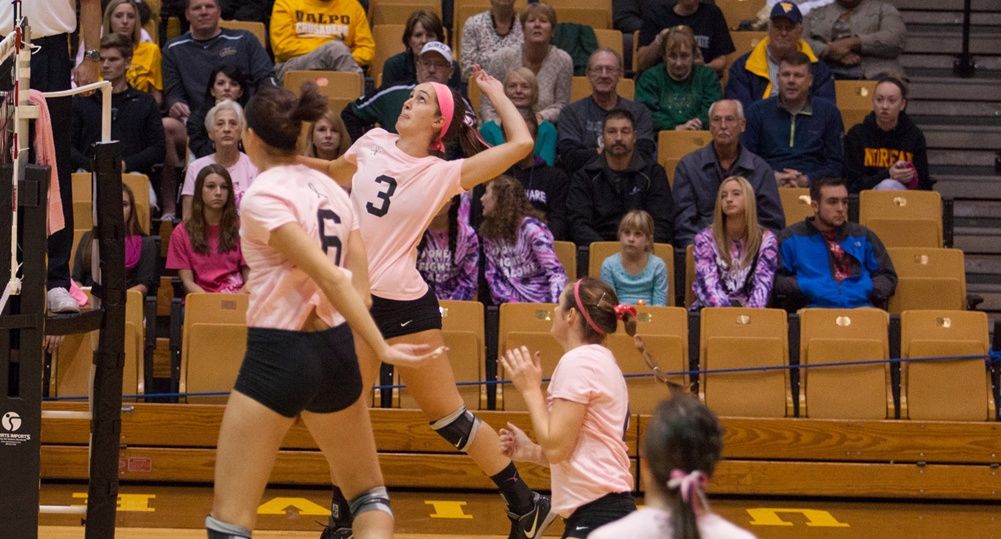 Beil obliterated Valpo’s previous record for hitting percentage in a four-set match, a mark which had stood for nearly 30 years at .632.  The senior started the match by registering kills on all six of her attacks in the opening set, and eventually ended the night with 15 kills and just one attack error on 19 swings, good for a .737 hitting percentage.  The mark also ranks sixth overall in the Crusader annals for hitting percentage in any length match, and is the best performance by a Valpo player in that category since 2007.

Beil’s performance led the way as the Crusaders hit .312 as a team for the match, but the senior had plenty of help.  Fellow senior Kelsey Victor (Logansport, Ind./Logansport) was nearly as efficient, picking up 11 kills on 18 attacks with just one error to hit .556 for the night.  Junior Kelsey Berrington (Britton, Mich./Tecumseh) handed out 45 assists and also found time to attack as well, tallying six kills on .364 hitting.

"I'm very happy for Morgan tonight," said Crusader head coach Carin Avery.  "That's an unbelievable hitting percentage for a single set, much less for a four-set match.  It's great to see a player like Morgan set a new program record as a senior, after the way she's played for us throughout her career.  I'm happy for her because she had struggled a bit last weekend, and it was great to see her come out and dominate like she did.  Both Morgan and Kelsey Victor did an excellent job tonight, both attacking and blocking."

The Crusaders’ offense was at its best in the opening set, as Valpo rolled to the 25-9 win to claim the first frame.  The Crusaders hit .548 for the set, recording 18 kills and committing just one attack error.  The set was tied early at 2-2, but Valpo would score 18 of the next 21 points to seize control.

Valpo faced a tougher challenge in the second set, as Cleveland State reeled off four straight points to take a 10-9 lead.  The Crusaders stormed back with an 11-1 run, however, including a pair of kills apiece from sophomore Emily Campbell (Grand Rapids, Mich./Forest Hills Central) and freshman Taylor Graboski (Upper Sandusky, Ohio/Upper Sandusky), to go ahead 20-11 and eventually take a 2-0 lead into the in-game break.

The third set saw the Vikings lead most of the way.  Valpo took a brief lead at 16-15 after three straight CSU errors, but the Vikings scored five of the next seven before back-to-back kills from Victor tied the frame at 20-all.  Out of a timeout, though, it was Cleveland State ending the set with a 5-2 spurt to send the match to a fourth set.

Cleveland State also led early in the fourth set at 5-4, but a 9-2 run gave the Crusaders all the momentum.  Berrington registered back-to-back kills early in the run, while Valpo took advantage of four CSU errors as well to push the lead out to six points at 13-7.  The Crusaders never let the lead fall under four points the rest of the way as they closed out the victory.

"That first set, we really won the serve and pass game," said Avery.  "We were able to take Cleveland State out of rhythm and hold them to a low hitting percentage, while we were in tempo almost the whole set, and that made a big difference.  Then we did a great job keeping pressure on them the rest of the way, making sure we didn't commit unforced errors."

Campbell joined Beil and Victor in double figures in the kills column, also posting 11 kills on the night.  In the back row, sophomore Morganne Longoria (Burlington, Wis./Burlington) and freshman Allison Ketcham (Mishawaka, Ind./Marian) each tallied a match-high 17 digs, while Campbell (12 digs) and Berrington (11 digs) both posted double-doubles.  Victor led all players with six blocks as Valpo tallied eight blocks as a team in the win.

Valparaiso (16-2, 3-1 Horizon) hits the road next weekend for two more league matches, starting with a 6 p.m. CT first serve Friday evening from Oakland.  Live video via the Horizon League Network and live stats will be available through ValpoAthletics.com.