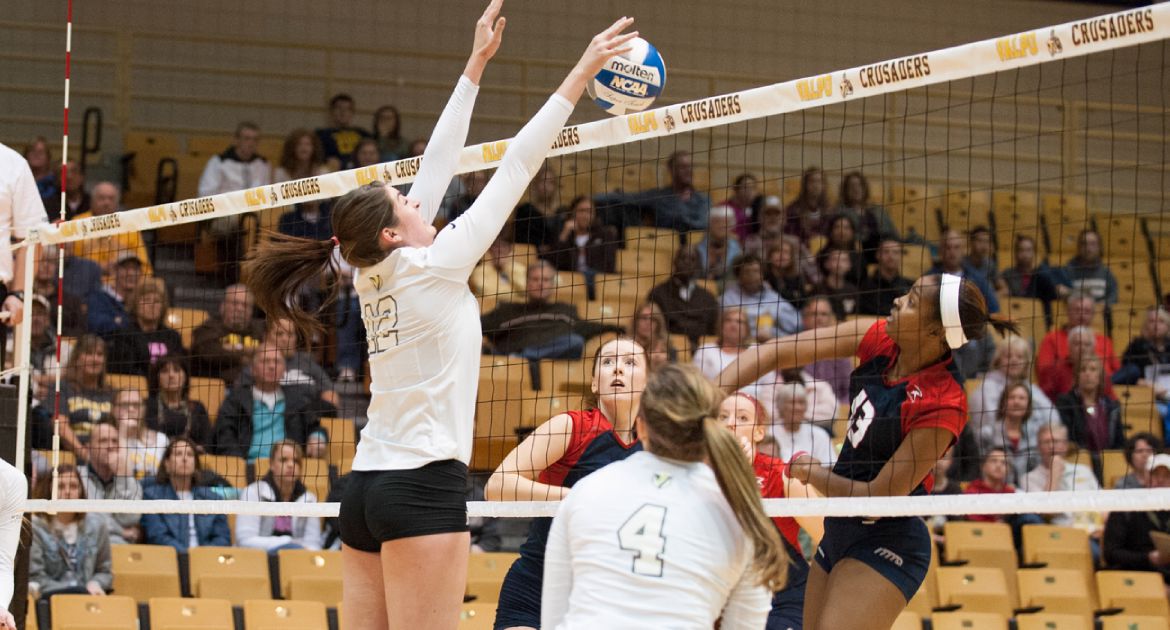 Despite a blocking performance that ranked among the best in program history, the Valparaiso volleyball team suffered its first home loss of the season on Friday night, falling to UIC at the ARC, 3-1 (27-25, 23-25, 31-29, 25-23) to close out the first half of Horizon League play.

The Crusaders registered 18 blocks over the four sets on Friday, tied for the ninth-best single-match total all-time at Valpo.  The 18 blocks were the second-most Valpo has recorded since the move to 25-point scoring, while the total also is the most over a four-set match since 2004.

Leading the way defensively at the net on Friday was freshman Taylor Graboski (Upper Sandusky, Ohio/Upper Sandusky).  Graboski closed the night with ten blocks, including four apiece in each of the final two frames, to pick up the most rejections by a Crusader since Ellen Vanden Berg tallied 11 rejections against UIC back in 2012.  Junior Kelsey Berrington (Britton, Mich./Tecumseh) set a new career high as well with six blocks, including the first two solo blocks of her career.

Despite the stellar blocking numbers, though, the Crusaders fell victim to the attacking prowess of UIC middle Stephenee Yancy.  Yancy, who entered the night as the Horizon League leader in both kills and hitting percentage, was limited to just 10 kills on .250 hitting through the first two sets, but exploded after the break, registering 15 kills on .619 hitting over the final two frames.

The opening frame set the tone for the match, featuring ten ties and eight lead changes.  Valpo led 21-19 before the Flames reeled off four straight points to go up 23-21.  The Crusaders answered with three straight of their own, including kills from senior Kelsey Victor (Logansport, Ind./Logansport) and sophomore Emily Campbell (Grand Rapids, Mich./Forest Hills Central), to earn set point at 24-23.  But a kill by Yancy sent the set to extra points, and the Flames converted on their second set point chance to take the opener.

It looked like UIC would take a 2-0 lead into the in-game break, as a kill by Sara Jo Sternard gave the Flames a 23-20 edge.  Graboski registered a kill to return the serve to the Crusaders, and Berrington and Victor combined on a block to force a UIC timeout at 23-22.  Following the stoppage, a hitting error evened things up at 23 apiece, and Campbell then came up with a kill to make it set point Valpo.  This time, the Crusaders converted, as Victor and Campbell joined forces for the rejection to close out the late-set comeback.

The third set had just five lead changes, but neither side could gain control.  Valpo led throughout much of the set, including as late as 22-21 after a solo block from Berrington.  UIC seemingly gained control with three straight points, earning set point at 24-22, but the Crusaders responded, holding off those two chances on a kill from Graboski and a block from Campbell and Graboski.  That set the trend for the remainder of the frame, as Valpo answered seven Flame set point opportunities with points.  But the Crusaders were unable to ever earn a set point chance of their own, and UIC finally closed out the set on its eighth chance with a kill.

It looked like Valpo had the momentum early in set four, as the Crusader defense tallied five blocks early on in going ahead 10-7.  Five of the next six points went to UIC, however, setting up another back-and-forth set.  The Flames held a narrow lead through the middle portion of the frame and were up 18-16 before a kill from Victor and a bad set from UIC tied things up at 18-all.  But the Flames scored three straight to go ahead 21-18, and the teams would just trade sideouts the rest of the way.

The Crusader middles led the way offensively as well on Friday, combining to hit at a .404 clip.  Graboski posted 13 kills on .385 hitting, registering the first double-double of her career, while Victor hit .429 with 11 kills.  Campbell tallied a team-best 17 kills, but also committed 12 attack errors, while Berrington handed out 50 assists.  Valpo hit just .182 as a team as it recorded 26 hitting errors, 20 of which were of the unforced variety.

Defensively, sophomore Morganne Longoria (Burlington, Wis./Burlington) paced Valpo with 14 digs in the back row and Campbell chipped in 11 digs for a double-double.  Victor recorded six blocks and Campbell five as part of the Crusaders’ effort at the net.

Outside of Yancy, Valpo limited UIC (10-12, 4-3 Horizon) to just .150 hitting, as outside hitter Kara Johnson matched Campbell by tallying 17 kills and 12 attack errors.  Nicole Johnson, the nation’s leader in assists, posted 59 helpers on Friday, while Allie O’Reilly led all players with 16 digs.

Valparaiso (17-4, 4-3 Horizon) steps out of league play for its next two matches, starting with a Sunday evening showdown against North Dakota State.  First serve is slated for 6 p.m., with live video via the Horizon League Network, live audio via WVUR (95.1 FM, Valparaiso) and live stats links available at ValpoAthletics.com.