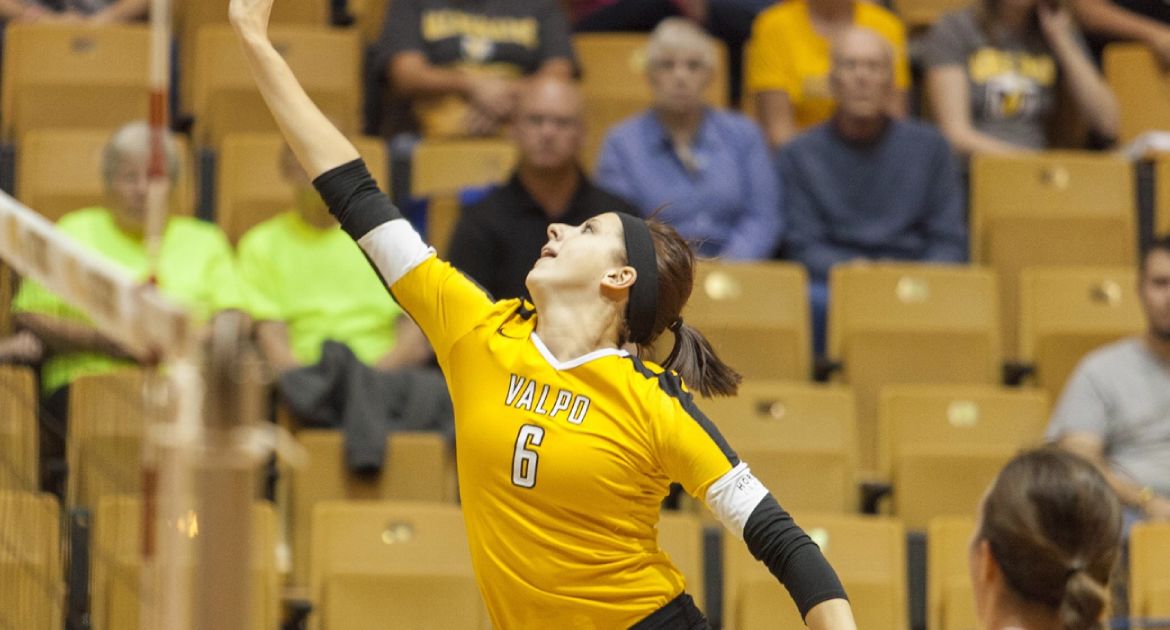 The Valparaiso volleyball team got back on the winning track Saturday afternoon at the ARC, taking care of business against Green Bay in a 3-0 (25-18, 25-23, 25-21) sweep in Horizon League action.

Sophomore Emily Campbell (Grand Rapids, Mich./Forest Hills Central) continued her strong performance on the offensive side of the ball, hitting .316 with a match-high 17 kills.  Senior Kelsey Victor (Logansport, Ind./Logansport) added 12 kills on .429 hitting, while senior Morgan Beil (St. Louis, Mo./Marquette) added eight kills without an error on 17 swings.  Junior Kelsey Berrington (Britton, Mich./Tecumseh) handed out 38 assists on the match as the Crusaders hit .269 as a team.

Defensively, Valpo limited Green Bay to just 29 kills on .067 hitting, tallying 49 digs and seven blocks.  Sophomore Morganne Longoria (Burlington, Wis./Burlington) led a balanced effort in the back row with 11 digs, while Campbell came up one dig shy of a double-double, posting nine of her own.  At the net, Victor was part of six Crusader rejections as she leads the Horizon League in blocks/set, while Beil joined in on four blocks.

“Today was a good match to get back into our rhythm,” said Crusader head coach Carin Avery.  “Last night, we had trouble producing kills, and today, we had hitters step up and finish points.  We also did a nice job closing out the sets that were tight down the stretch.  Hopefully this serves us well heading into a challenging weekend.”

The Crusaders cruised to the first-set win, leading from the opening point as they forced the Phoenix to hit -061 for the set.  Valpo used an 8-3 run mid-set to take a 12-8 lead and push it open to 20-11, eventually ending the opening set on a Phoenix attack error.

The second set would be much more difficult for Valpo to secure, as it featured 11 ties and six lead changes.  The Crusaders erased an early deficit with a 7-1 run, which gave Valpo a 16-14 lead.  But Green Bay would fight back, going ahead 19-18 before the Crusaders answered with four straight points, including two kills and a block by Victor.  The teams would just trade side-outs the rest of the way, with kills from Beil accounting for each of the Crusaders’ final two points as they entered the locker room with a 2-0 edge.

Green Bay earned the first point of the third set, but Valpo scored six of the next seven, including four kills by Campbell, to take the lead for good.  But it wouldn’t come easy for the Crusaders, as the Phoenix erased all but one point of a seven-point deficit to close within 20-19.  Valpo responded with a kill from freshman Taylor Graboski (Upper Sandusky, Ohio/Upper Sandusky) to prevent the Phoenix from tying things up, and back-to-back Green Bay errors gave Valpo match point.  The Crusaders eventually converted on their second chance to end the match thanks to a Campbell kill.

Taylor Totka led Green Bay (3-17, 1-8 Horizon) with nine kills, but no other Phoenix player had more than six kills.  Taylor Kasal paced all players with 15 digs.

Valparaiso (19-6, 5-4 Horizon) heads out to Ohio next weekend for a pair of league matches, opening up with a Friday night match at Cleveland State.  First serve is slated for 6 p.m. CT, with live video and stats available at ValpoAthletics.com.