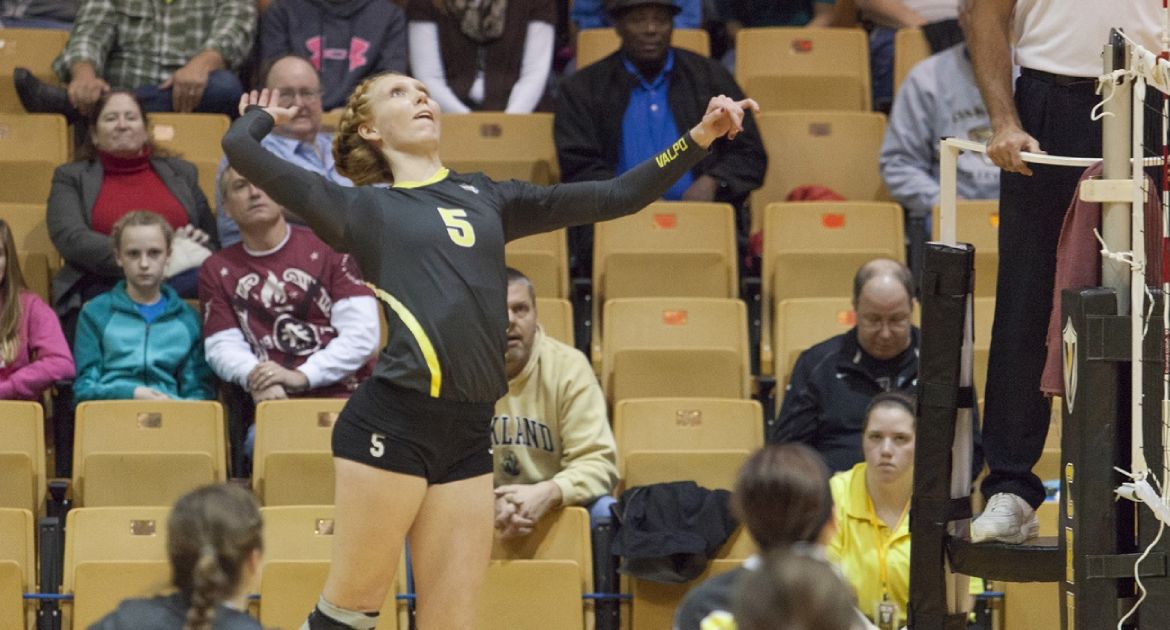 The third frame was extremely tight throughout, as neither squad led by more than two points at any point in the set, which featured 20 ties and seven lead changes.  With the match tied at a set apiece, it was Oakland which looked to claim the third set with a 23-21 lead, but a kill from freshman Allison Ketcham (Mishawaka, Ind./Marian) and an Oakland error tied things up at 23 apiece and set off a back-and-forth battle.

Oakland had the first two set point chances, both of which the Crusaders staved off, and Valpo then had three opportunities to claim the set that it was unable to capitalize on.  The teams then traded set points, both times seeing the trailing team come up with a big point to extend the frame.  Oakland earned the next two chances at 31-30 and 32-31, but each time the Crusaders found a way to stay alive.  Finally, on Oakland’s sixth point chance at 33-32, the Golden Grizzlies’ Sammy Condon registered a kill to give Oakland a 2-1 lead.

The match entered the third frame tied at one apiece after Oakland took a close opener and Valpo ran away with the second set.  In the first set, Valpo led as late as 20-19 following a setter dump by junior Kelsey Berrington (Britton, Mich./Tecumseh), but Oakland answered with three straight points.  The Crusaders responded with three of the next four points, capped by a Ketcham kill which made it 23-all.  Back-to-back kills from the Golden Grizzlies ended the opener in their favor, however.

Valpo pulled away before the midway stage of the second set, taking advantage of .368 hitting for the frame.  Leading just 7-5, the Crusaders went on an 8-3 run, tallying all eight of their points on kills – four of which came from sophomore Emily Campbell (Grand Rapids, Mich./Forest Hills Central) – to pull ahead 15-8, and the Crusaders’ lead never fell under six points from there as they evened the match at 1-1.

But the decisive third set went Oakland’s way, and the Golden Grizzlies carried that momentum into the fourth set.  Valpo never led in the frame, tying the score just twice early on, and a 6-0 run gave Oakland a 12-4 lead and control the rest of the way.

Campbell led all players with21 kills, hitting .327 for the match, and also added a career-high 25 digs for the second 20-20 performance of her career.  Ketcham was the only other Crusader to reach double figures in kills, tallying 12 terminations, and picked up 24 digs as well.

Valparaiso (22-7, 8-5 Horizon) steps out of league play for the final time Tuesday evening at IPFW.