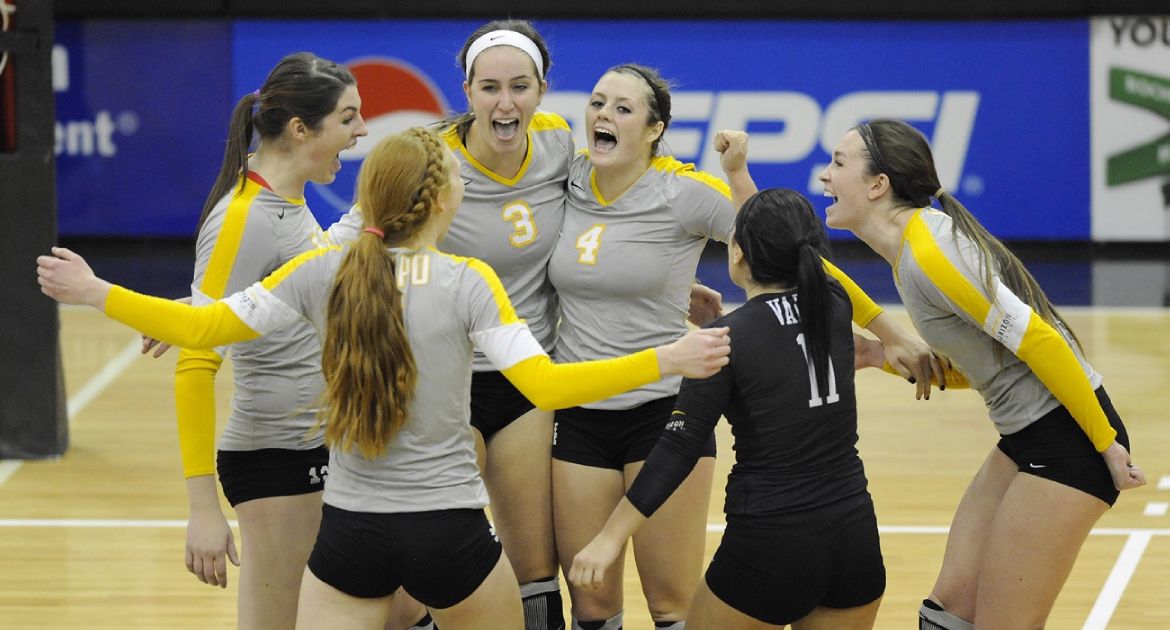 For the eighth consecutive year since joining the Horizon League, the Valparaiso volleyball team finds itself in the semifinals of the Horizon League Championship, as the third-seeded Crusaders advanced to the semis Friday with a 3-0 (25-22, 25-22, 25-22) sweep of sixth-seeded UIC in Rochester, Mich.

“We are excited to be in another semifinal,” said Crusader head coach Carin Avery.  “We did what we needed to tonight in order to advance.”

Freshman Allison Ketcham (Mishawaka, Ind./Marian) stood out for the Crusaders on Friday.  The Horizon League All-Freshman team selection reached double figures in kills for the tenth time on the season and the third time in her last four matches, posting ten kills on a team-best .450 hitting.  Defensively, Ketcham tallied eight digs as she narrowly missed a double-double.

Horizon League co-Player of the Year Emily Campbell (Grand Rapids, Mich./Forest Hills Central) and junior All-League honoree Kelsey Berrington (Britton, Mich./Tecumseh) both posted double-doubles in the sweep.  Campbell tallied a match-best 12 kills and also tied for match-high honors with 12 digs.  Meanwhile, Berrington handed out 33 assists in the winning effort and picked up 11 digs on the back line as well.

All three sets were tight in the end, but there were only three total lead changes throughout the match.  Valpo took control of the opening set early, reeling off a 13-3 run to take a 16-10 lead – a run which featured five service aces, including two apiece by Berrington and sophomore Rachel Bruinsma (New Era, Mich./Western Michigan Christian).  UIC would rally, scoring the next three points and closing to within 20-19.  But Campbell stepped up down the stretch, picking up three of her seven kills in the opening set over the next six points to give the Crusaders a 24-21 edge.  On their second set point chance, a UIC error ended the opener in the Crusaders’ favor.

Valpo tried to pull away around the midway point of the second set with a 7-1 spurt – a run which included two kills each from Ketcham and Berrington – to push its lead to 14-7.  The Flames answered with seven of the next eight points to close to within 15-14, and later in the set, UIC was within two at 20-18 after earning consecutive points.  But the Crusaders prevented the Flames from scoring back-to-back points the remainder of the set, and Campbell tallied kills for two of Valpo’s last three points, including the set point, as the Crusaders took a 2-0 lead into the in-game break.

The Crusaders looked to run away with the third set early, going up 12-4 approaching the halfway point.  With the lead still eight points at 14-6, the Flames began to chip away, scoring 14 of the next 20 points to even up the third frame at 20-20.  A Campbell kill was answered by Stephenee Yancy for UIC to keep it even, but the Crusaders posted back-to-back points on a Kelsey Victor (Logansport, Ind./Logansport) kill and a UIC error to make it 23-21.  Another kill from Yancy brought UIC within 23-22, but a Flame service error gave Valpo match point at 24-22, and the Crusaders would need just one attempt to close out the sweep, as senior Morgan Beil (St. Louis, Mo./Marquette) closed the match with a kill.

Victor, Beil and freshman Taylor Graboski (Upper Sandusky, Ohio/Upper Sandusky) each tallied at least six kills and hit better than .200 as the Crusaders finished the night hitting .236 as a team.  UIC (14-17) received 11 kills from Yancy and ten kills each from Molly McCoy and Kara Johnson.

Valparaiso (25-7) advances to the Horizon League semifinals on Saturday afternoon, where it will face second-seeded Milwaukee at 4 p.m. CT, with a berth in Sunday’s title match on the line.  The match can be seen live on ESPN3.com, with links for live video, audio and stats available at ValpoAthletics.com.