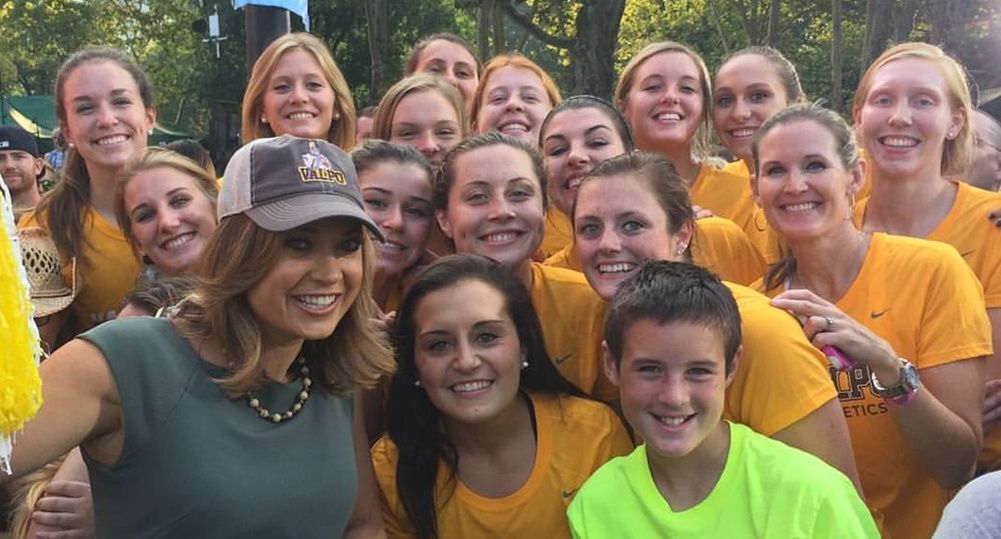 A jam-packed day Friday in New York City for the Valparaiso University volleyball team, which included an early-morning visit to the Good Morning America summer concert series to see Florida Georgia Line, ended on a high note as well. When it was time to go to work, the Crusaders took care of business, defeating Rider 3-1 and NJIT 3-0 to open play at the Terrier Invitational.

“It was an exciting day for the team, both on and off the court,” said Crusader head coach Carin Avery. “We had a great opportunity in the morning to surprise the girls with the chance to attend the concert. Then, once we got on the court, it was exciting because we got a chance to see a lot of different lineups. We got to get a lot of players some playing time and see how they worked together, while still making sure to come out with the wins.”

The day started before the crack of dawn, as the Crusaders took to the subway to head over to Central Park for the GMA concert series. There as guests of 2002 Valparaiso University alum and GMA meteorologist Ginger Zee, the team had prime spots to see Florida Georgia Line perform and even made an appearance on TV with Zee during one of her weather reports. Following the concert, the team went for a walk through Central Park, enjoying one of America’s most recognizable parks.

But it would be business as usual for the Crusaders on the volleyball court Friday afternoon as they improved to 5-0 to start the 2015 campaign. Opening the tournament against Rider, Valpo found itself in a back-and-forth battle in an opening set which featured 12 ties and seven lead changes. The Crusaders fought off a pair of set point chances for Rider in the opener, and then afforded their first set point opportunity after back-to-back Rider errors, sophomore Taylor Graboski (Upper Sandusky, Ohio/Upper Sandusky) put home a kill to give Valpo the opener.

The second set would come somewhat easier for the Crusaders, as leading 15-13 just past the midway point, freshman Katherine Carlson (Lake Orion, Mich./Notre Dame Prep) stepped to the service line and unleashed a big run on serve. Carlson opened the spurt, fittingly enough, with an ace – one of three for the rookie during the run – while sophomore Allison Ketcham (Mishawaka, Ind./Penn) had a pair of kills as well as Carlson served nine straight points en route to the 25-14 set two win.

Coming out of the break, Rider would claim the third set, erasing a 17-16 Crusader lead with an 8-1 run to eventually force the fourth set. But Valpo took control in the fourth frame, never trailing as it started the set on a 6-2 spurt. Rider would get no closer than two points the rest of the way, and junior Lexie Bouza (Elgin, Ill./Burlington Central) gave the Crusaders match point with back-to-back aces. On their third chance, the Crusaders ended the match thanks to a Ketcham kill.

Ketcham led the way in the opener with a double-double, posting a team-high 14 kills to go with 12 digs. Junior Emily Campbell (Grand Rapids, Mich./Forest Hills Central) added her own double-double, hitting .308 with 11 kills and 10 digs, while freshman Sydney Bronner (Frankenmuth, Mich./Frankenmuth) chipped in seven kills on 18 swings without committing an attack error and also led the team with three blocks.

Senior Kelsey Berrington (Britton, Mich./Tecumseh) handed out 47 assists, narrowly missing her own double-double as she recorded nine digs. Carlson posted a Valpo season-high five aces in all, nearly half of the Crusaders’ total of 11 aces from the service line, while junior Morganne Longoria (Burlington, Wis./Burlington)  paced the Crusaders with 13 digs.

In the nightcap versus NJIT, the Crusaders were able to experiment with a number of different combinations and ran out a number of different looks at setter, utilizing all three setters and switching between a 5-1 and 6-2 offense. Valpo hit .462 in the opening set, which saw Berrington set for about the first two-thirds of the frame before freshman Lizzie Zaleski (Oak Lawn, Ill./Marist) came in to run the offense for the final third of the opener.

Zaleski would then share setting duties with sophomore Tarrah Lasky (Valparaiso, Ind./Valparaiso) over the final two sets, but the offense still ran quite efficiently, as the Crusaders hit .282 over sets two and three to finish at .327 overall. Valpo did see a 23-18 lead late in set two erased by five consecutive NJIT points, but rebounded with kills from Ketcham and Graboski to go up 2-0. Then, up just 20-19 in the third, Ketcham and Graboski rattled off kills before a Longoria ace made it 23-19, and then after back-to-back NJIT points, Graboski and Zaleski terminated rallies to close out the sweep.

Valparaiso (5-0) looks to make it six wins in a row to open the 2015 season and earn its second consecutive tournament title on Saturday, as the Crusaders take on host St. Francis Brooklyn. First serve is slated for noon CT.