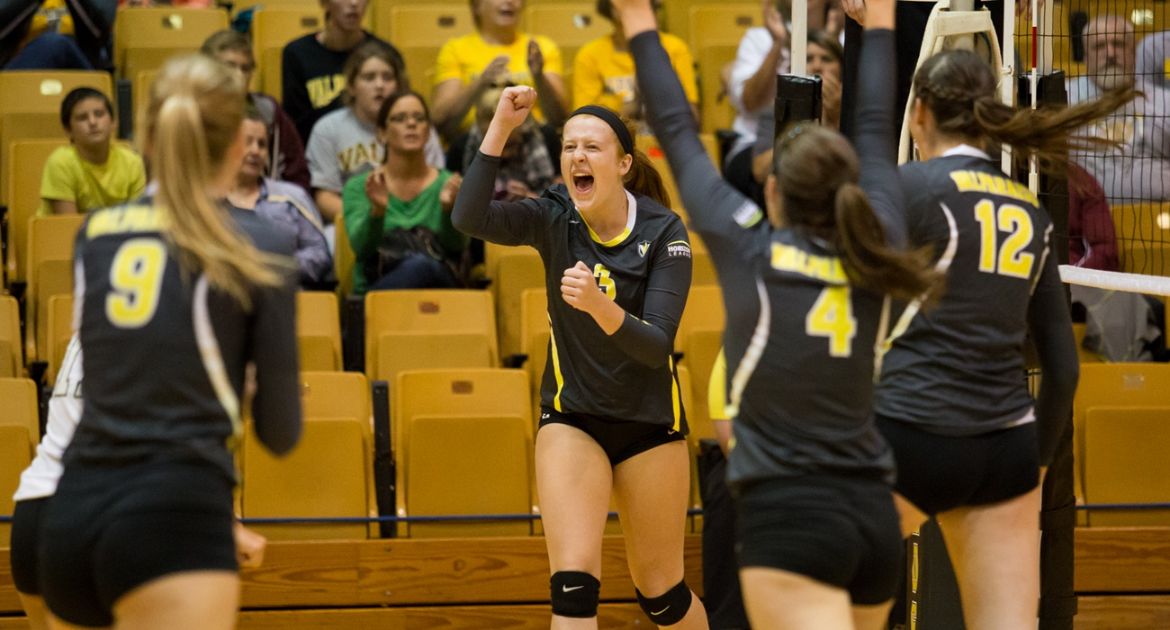 Valparaiso senior setter Kelsey Berrington (Britton, Mich./Tecumseh) registered her 3,000th career assist early in the Crusaders’ first match of the Popcorn Classic Friday, and the team would reach a milestone to close the night, as with sweeps over Kennesaw State (25-21, 25-21, 25-21) and Elon (25-21, 25-18, 25-16), Valpo improved to 8-0 on the season – matching the best start in program history.

Berrington entered the weekend just eight assists shy of reaching the 3,000 mark for her career and hit the milestone midway through the first set against Kennesaw State. The senior closed the night with 3,055 career assists – good for fifth in program history and just six helpers shy of fourth position.

“A big congrats to our senior captain in Kelsey for reaching 3,000 career assists tonight,” said Crusader head coach Carin Avery. “She has really helped make our program successful, not only with the assists on the court, but with all the intangibles that she brings to the table as a leader. As the only senior in this group, Kelsey’s done a fantastic job leading the team this season, and hopefully her influence on her teammates lasts long after she’s graduated.”

Meanwhile, the Crusaders continued their strong start to the season with the pair of sweeps on Friday, as Valpo is now 8-0 this season, with six of its eight victories coming in straight sets. The eight straight victories to start the year match the 2003 and 2013 Valpo squads, which both began 8-0 as well, for the most wins before a loss in program history.

Valpo was never seriously threatened late in any set of either match on Friday, winning all six sets on the day by at least four points, but the Crusaders needed to fight off a game Kennesaw State (6-1) squad in all three sets Friday afternoon. The Owls led 19-18 in the opener before Valpo put together a 6-1 run, started by a solo block from junior Jamie Lacheta (Warsaw, Ind./Warsaw) and capped by a kill by Berrington, to earn set point at 24-20. On their second chance, the Crusaders ended the opening frame on a kill from sophomore Allison Ketcham (Mishawaka, Ind./Marian).

Valpo’s lead was just one at 20-19 before the Crusaders took advantage of three straight errors by the Owls to gain some breathing room, eventually going up two sets to none on a kill by sophomore Taylor Graboski (Upper Sandusky, Ohio/Upper Sandusky). KSU was up 20-19 in the third set, but a Graboski kill was followed by two Owls errors and a pair of kills from junior Emily Campbell (Grand Rapids, Mich./Forest Hills Central) to make it 24-20 and give Valpo match point. On their second chance, the Crusaders closed out the sweep with a Graboski kill.

Campbell recorded another double-double in the win to lead the way for the Crusaders, posting a match-high 15 kills on .324 hitting and 12 digs. Graboski added 11 kills, while Lacheta put down eight kills on 15 swings without committing an attack error. Berrington handed out 40 assists as the Crusaders hit at a .321 clip as a team. Junior Morganne Longoria (Burlington, Wis./Burlington) led the Valpo back-row effort with 13 digs.

In the nightcap, Valpo had to rally from behind as the opening set neared the end stages against Elon (2-7). The Crusaders trailed 21-20, but a kill from freshman Katherine Carlson (Lake Orion, Mich./Notre Dame Prep) returned the serve to Valpo and it would end the set on a 5-0 run. Carlson made it back-to-back kills, as she had three terminations late in the frame, while junior Rachel Bruinsma (New Era, Mich./Western Michigan Christian) closed out the set with consecutive service aces.

Neither of the final two frames would remain close nearly as long. Valpo pulled away early in the second set, going on a 6-0 run on the serve of Campbell, and never led after the opening stages by fewer than three points. Then, in the final frame, Berrington served six consecutive points – three of which ended with Campbell kills – as Valpo turned a 10-8 edge into a lead which neared double figures.

Campbell again led the Crusaders on the attack, this time with 12 kills, while Graboski, Carlson and redshirt freshman Kayla Currier (Frankfort, Ill./Lincoln-Way East) all posted seven kills. Berrington handed out 23 assists, while Bruinsma tallied three aces. Longoria led all players with 15 digs and Graboski recorded a trio of blocks as the Crusaders out-hit Elon, .205-.035, for the match.

“It was nice to see us take care of business in three sets in both matches today,” said Avery. “I felt like we passed the ball very well, which allowed us to distribute the ball to a lot of different attackers. We would like to see our serving improve tomorrow – we’ve had way too many unforced service errors over the last few matches, and need to get that number down.”

In other action from the Popcorn Classic on Friday, Loyola defeated Elon, 3-1, and then downed Savannah State, 3-0. The Crusaders will face the Ramblers in the tournament’s final match, Saturday evening at 7 p.m., while Valpo plays Savannah State earlier in the day at 11:30 a.m. The five-match day kicks off at 9 a.m. Saturday morning. Both of Valpo’s matches will be broadcast live on ESPN3.com, while all five matches will have live stats via ValpoAthletics.com.