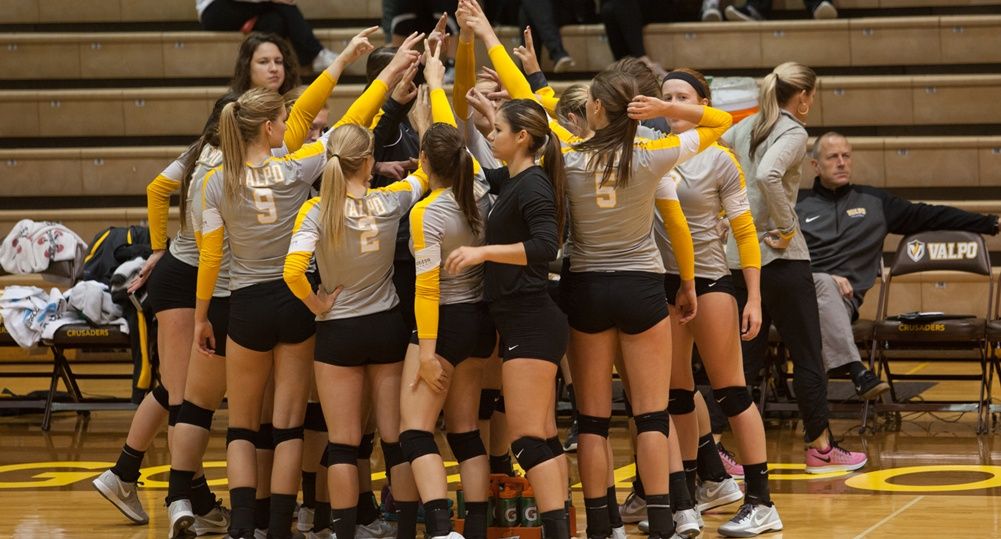 The Valparaiso University volleyball team extended the best start in program history to 9-0 with a three-set sweep of Savannah State (25-13, 25-17, 25-11) Saturday morning, but was unable to claim the Popcorn Classic title later that evening at the ARC, as the Crusaders were dealt their first loss of the season by Loyola (25-22, 25-18, 25-21). Senior Kelsey Berrington (Britton, Mich./Tecumseh) and sophomore Taylor Graboski (Upper Sandusky, Ohio/Upper Sandusky) represented the Crusaders on the All-Tournament Team.

The Crusaders broke the tie for best start in program history, which they had shared with the 2003 and 2013 teams after yesterday’s pair of wins, with the morning sweep of the Tigers from Savannah State. A service run capped by back-to-back aces from junior Rachel Bruinsma (New Era, Mich./Western Michigan Christian) pushed Valpo’s lead to 13-4 midway through the first set, and the lead wouldn’t fall under seven points the rest of the way.

Valpo ended the second set on a four-point spurt, turning a 21-17 lead into a two sets to none advantage. Then another Bruinsma service run was the key stretch in the third set, as the Crusaders scored seven consecutive points on her serve – including two more aces – to pull away early.

The nightcap would not be as kind to the Crusaders, however, as the Ramblers took the tournament finale in straight sets to deny Valpo its sixth consecutive in-season tournament title. Loyola won Saturday night on the strength of its offensive attack, as it hit at a stellar .402 clip for the match – posting 46 kills against just seven attack errors. Valpo held leads past the midway point of both the first and third sets, but was never closer than two points late in any of the three frames.

Sophomore Allison Ketcham (Mishawaka, Ind./Marian) recorded a double-double to lead the Crusaders against Loyola (8-2), as she topped the Valpo charts in both kills (13) and digs (11) while hitting .321. Graboski added eight kills as well, while Berrington handed out 31 assists and tallied six digs.

Valparaiso (9-1) concludes a brief homestand on Tuesday evening as the Crusaders host Toledo in non-league action. First serve is slated for 7 p.m. and the match will be broadcast live on ESPN3.com, with live stats available at ValpoAthletics.com.