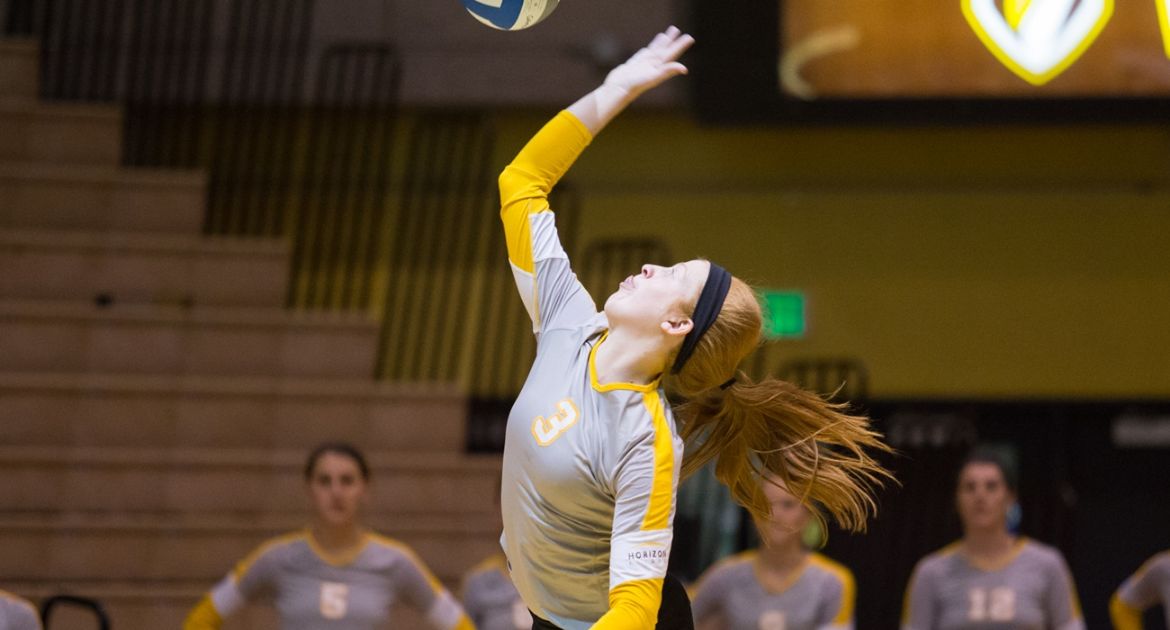 The Crusaders found themselves having to fight back against the Rockets from the very beginning of the first set, as Toledo ran out to a quick 7-0 lead. Valpo rallied and put together an 8-0 run midway through the frame to go ahead 13-11, but Toledo pushed forward and eventually earned set point at 24-21.

But at that point, Valpo’s freshmen stepped up and led the way as the Crusaders went on a five-point run to come from behind and claim the opener. Katherine Carlson (Lake Orion, Mich./Prep) started the run with a kill, and Kayla Currier (Frankfort, Ill./Lincoln-Way East) combined on blocks with first Lizzie Zaleski (Oak Lawn, Ill./Marist) and then Carlson to even the set at 24-24. A kill from Zaleski gave Valpo its first set point opportunity, and the Crusaders took advantage of an overpass on the serve receive as Carlson tallied another kill to end the opener in Valpo’s favor.

The second set was all Valpo from start to finish, as the Crusaders never trailed and hit at a .353 clip with 16 kills to head into the locker room for the in-game break up two sets to none. But looking as if they were on their way to a sweep in the third set up 17-11, the Crusaders faltered, as Toledo ended the set on a 14-4 run to force a fourth frame.

Valpo would again never trail in the fourth set, but the deciding set would not come easily, as Toledo evened the score on six occasions, the latest coming at 17-17. A 5-1 run, highlighted by two service aces from senior Kelsey Berrington (Britton, Mich./Tecumseh) gave the Crusaders breathing room at 22-18, but the Rockets responded with three consecutive points to close within one. Valpo pushed back to close out the match, however, as kills by junior Jamie Lacheta (Warsaw, Ind./Warsaw) and sophomore Taylor Graboski (Upper Sandusky, Ohio/Upper Sandusky) made it 24-21, and a Toledo (1-9) attack error ended the match in the Crusaders’ favor.

Carlson paced Valpo on the attack Tuesday with 12 kills on .294 hitting and also picked up 13 digs for her second double-double of the season. Both Graboski, who hit .250, and Campbell added 11 kills as well, while Berrington dished out 22 assists and sophomore Tarrah Lasky (Valparaiso, Ind./Valparaiso) handed out 14 assists. Junior Morganne Longoria (Burlington, Wis./Burlington) led Valpo with 21 digs and Currier paced the effort at the net with five blocks.

Valparaiso (10-1) plays its final in-season tournament of the season this weekend, as the Crusaders travel to Terre Haute for the ISU Classic. Valpo will kick off tournament action Friday afternoon versus Chicago State at 3 p.m. CT, with live stats available via ValpoAthletics.com.