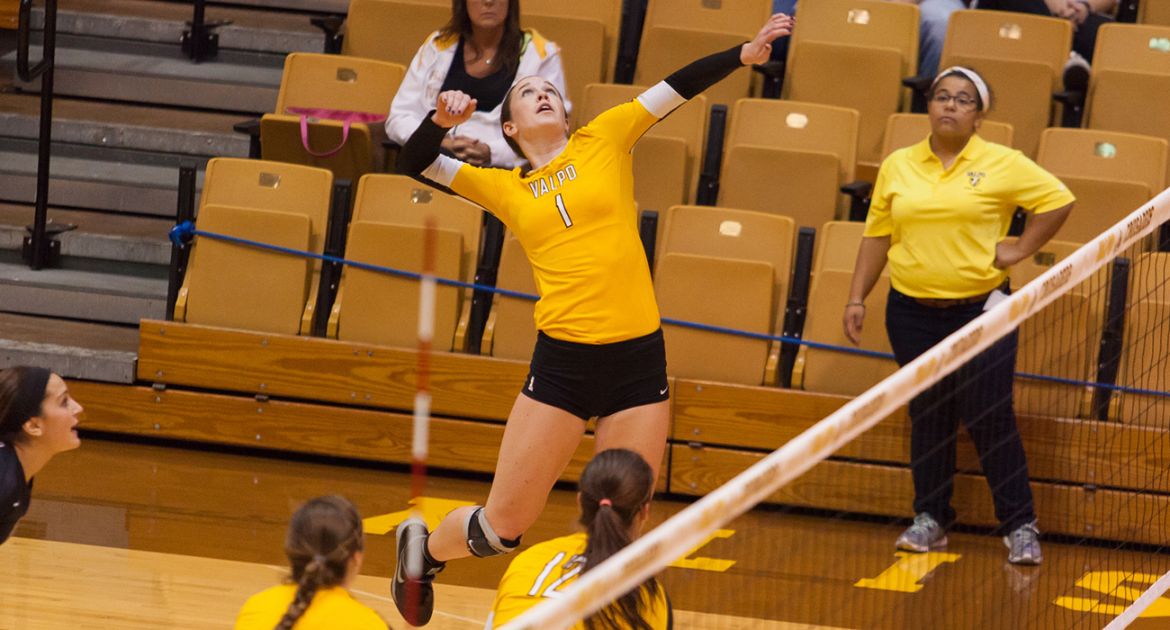 The Valparaiso University volleyball team made it a perfect 2-0 weekend on the road to start off Horizon League play with a 3-0 sweep (25-18, 27-25, 25-20) of Wright State in Dayton, Ohio on Saturday afternoon. The win moves the Crusaders to 14-2 overall on the season.

“It’s great to start off the league season with two road wins,” said Crusader head coach Carin Avery. “Our conference is unbelievably tough this year. It will be a tough battle and we will take it one match at a time. Our outside hitters did a great job leading us this weekend from the attack line, and we played good defense around our block.”

Leading the way offensively again was junior outside hitter Emily Campbell (Grand Rapids, Mich./Forest Hills Central). One day after posting 20 kills, Campbell followed it up with a match-high 15 kills against the Raiders on Saturday as she averaged an even five kills per set over the pair of weekend victories. Sophomore Taylor Graboski (Upper Sandusky, Ohio/Upper Sandusky) chipped in 10 kills for the second straight match as well. Senior Kelsey Berrington (Britton, Mich./Tecumseh) made the offense go on Saturday, handing out 35 assists and averaging 12.43 assists/set for the weekend.

On the back line, junior Morganne Longoria (Burlington, Wis./Burlington) – one day after moving into the Crusaders’ all-time top-10 in digs – posted a match-best 18 digs to move within 19 of ninth position in Valpo history. Sophomore Allison Ketcham (Mishawaka, Ind./Marian )added 13 digs and junior Lexie Bouza (Elgin, Ill./Burlington Central) chipped in 10 digs as the Crusaders limited WSU to .143 hitting on Saturday. Graboski paced Valpo at the net, as the sophomore was in on five of the Crusaders’ seven blocks.

Valpo used a four-point run midway through the opening set to take the lead for good, but pulled away late. WSU was still within two at 19-17 before the Crusaders closed the frame on a 6-1 spurt to claim the opener, eventually closing it out on a kill from freshman Lizzie Zaleski (Oak Lawn, Ill./Marist).

Much like the second set on Friday, the Crusaders had to rally to force extra points in the second frame on Saturday. Trailing 20-16, Valpo scored six of the next eight points to even up the set at 22 apiece. The teams traded sideouts for the next six points, with the Crusaders holding off a pair of WSU set point chances. A kill from junior Jamie Lacheta (Warsaw, Ind./Warsaw) evened things up at 25-25, and kills by Graboski and Ketcham ended the set and gave Valpo a 2-0 lead.

The Crusaders again used a mid-set spurt to take the lead for good in the deciding frame. Trailing 11-10, Valpo scored the next five points – including a service ace from Bouza and capped by back-to-back Ketcham kills – to pull ahead 15-11. WSU would rally to within two points a couple of times, but each time the Crusaders held off the Raiders’ advance as Valpo eventually closed out the sweep with a Graboski kill.

Katie Klusman led Wright State (11-6, 0-2 Horizon) in the losing effort with 12 kills and recorded a double-double with 10 digs. Jessie Thornton paced the Raiders with 15 digs.

Valparaiso (14-2, 2-0 Horizon) looks for its first 3-0 start to Horizon League play since its inaugural year in the league in 2007, as the Crusaders return home Tuesday night to host UIC in a battle of league unbeatens. First serve is slated for 7 p.m., and the match can be seen live on ESPN3.com. Links for the live video, audio and stats will be available at ValpoAthletics.com.