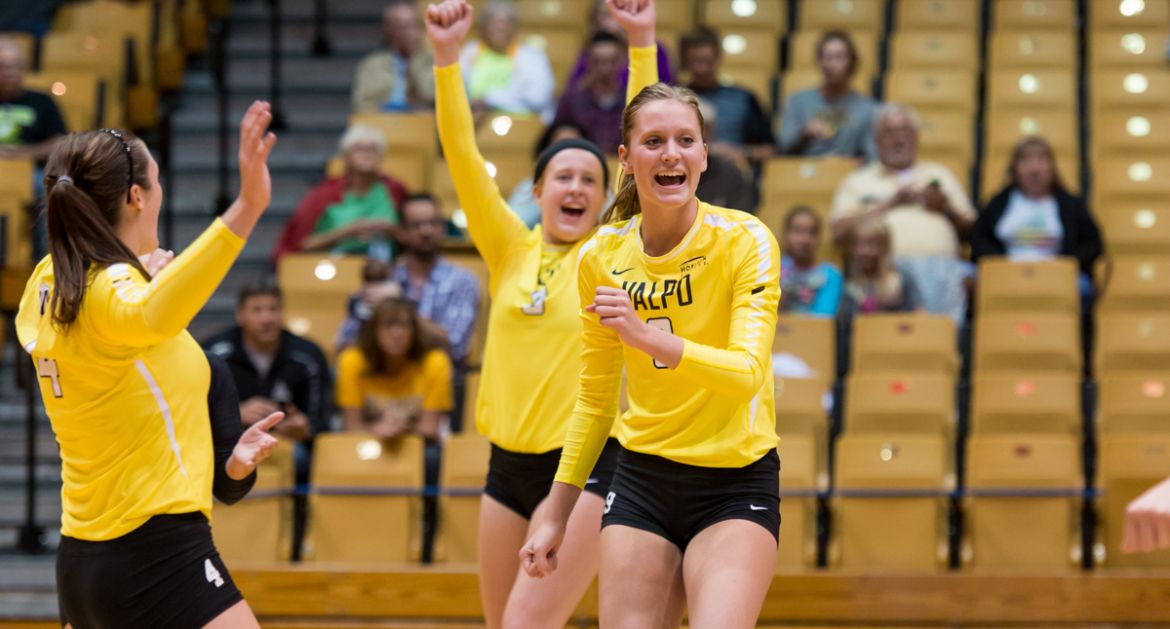 Strong performances all over the court Tuesday evening at the ARC led to a 3-1 (25-18, 25-27, 25-20, 25-15) victory for the Valparaiso University volleyball team over UIC in Horizon League play. The win moved the Crusaders’ record to 15-2 on the year, just the second time in program history they’ve held a 15-2 mark, and pushed Valpo atop the Horizon League standings at 3-0.

“We had a game plan going into tonight, and I thought our girls really stuck to it and executed it very well,” said Crusader head coach Carin Avery. “I thought we did a fabulous job keeping balls in play and keeping pressure on UIC, which was part of our defensive game plan. Then, obviously, when you hit what we did offensively, good things are going to happen – we did an outstanding job on the attack to hit .338 against a very good UIC team.”

In a matchup of the two reigning co-Horizon League Players of the Year, junior Emily Campbell (Grand Rapids, Mich./Forest Hills Central) stood out on Tuesday. Campbell, coming off a weekend in which she averaged better than five kills per set in a pair of wins, took it to another level in the win over the Flames. The junior posted a career-high 25 kills and did so efficiently, hitting .400 and committing just three attack errors. Campbell also added 12 digs for her seventh double-double of the year.

But Campbell was hardly alone in the offensive attack, as the Crusaders hit .338 as a team – their best hitting percentage in a four-set match since the move to 25-point rally scoring. Freshman Katherine Carlson (Lake Orion, Mich./Notre Dame Prep) joined Campbell in posting a career high in kills, coming off the bench and producing 13 kills on .480 hitting.

Valpo’s defense was also up to the task against the Flames on Tuesday. In the back row, junior Morganne Longoria (Burlington, Wis./Burlington) picked out UIC attacks again and again, finishing the night with a match-high 23 digs as the Crusaders out-killed the Flames, 62-53. Meanwhile, at the net, Valpo tallied a season-best 11 blocks, with Bruinsma setting a new career high as she was in on seven rejections. Berrington got in the act as well, posting a pair of solo blocks among her three blocks after entering the night with four career solo stuffs.

The Crusaders got off to a strong start to take the opening set on Tuesday, hitting .350 without committing an attack error and blocking five balls in the opening frame. Leading by just one point at 12-11, a solo block by Berrington on Stephenee Yancy sparked a 5-0 run which gave Valpo breathing room for the rest of the set as it claimed the opener. Valpo looked poised to potentially go up two sets to none, rallying from a late deficit in set two to earn set point at 24-23, but UIC scored four of the final five points of the frame to send the match into the in-game break tied at one set apiece.

Valpo would lead nearly start to finish in the third set and held off a late UIC rally, as the Flames scored four straight to move within 22-20. A service error returned the serve to the Crusaders, and Campbell and Carlson finished the set with kills to give Valpo a 2-1 advantage. The Crusaders then limited UIC to just nine kills on .000 hitting in the fourth set, and Valpo rallied from an early 4-1 deficit with an 11-0 run on Longoria’s serve – a spurt which included five Campbell kills – to take control. UIC would get no closer than six points the rest of the way, and Valpo closed out the match on a block from Carlson and Graboski.

Yancy, who shared league Player of the Year honors last season with Campbell, led UIC (8-8, 2-1 Horizon) with 20 kills on just 45 attacks, but the Crusaders blocked five of her attacks in limiting her to .267 hitting after she hit .500 in the opening weekend of league play. Kara Johnson added 11 kills on .333 hitting and 18 digs for the Flames, while Bridget Powell also contributed 18 digs.

Valparaiso (15-2, 3-0 Horizon) looks to extend its perfect start to Horizon League play Friday evening as the Crusaders continue their current five-match homestand, hosting Oakland at the ARC. First serve is slated for 7 p.m., and all the action can be seen live on ESPN3.com. Live video, audio and stats links will be available via ValpoAthletics.com.