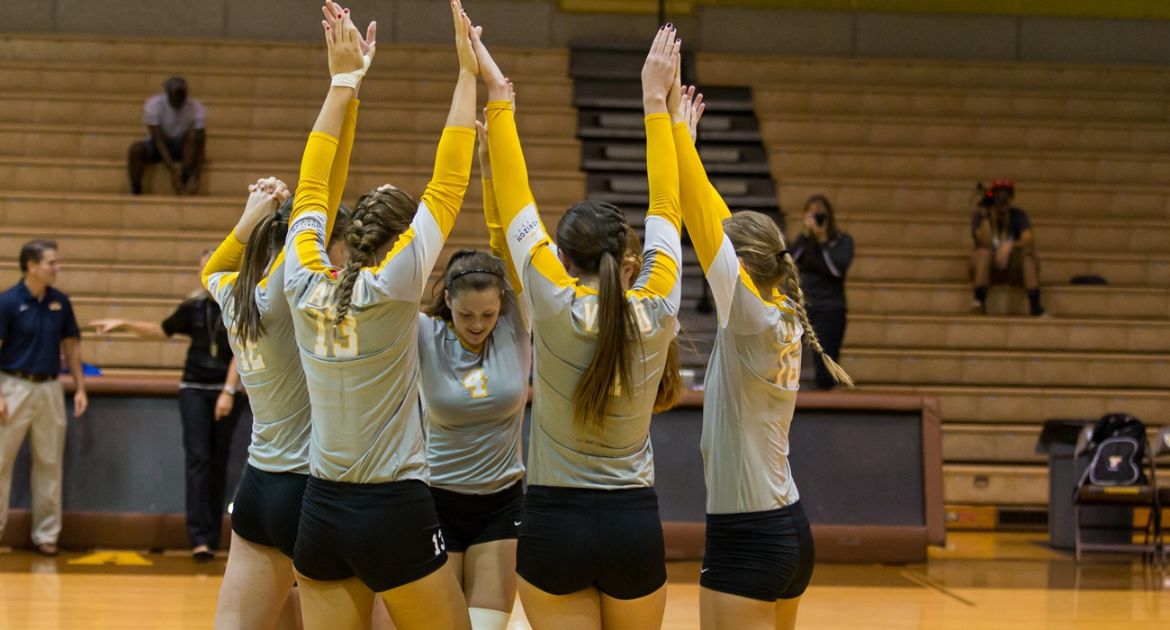 This Week in Crusader Volleyball: The Valparaiso volleyball team looks to extend its perfect start to Horizon League play Friday evening as the Crusaders host defending league champion Oakland at the ARC.

Previously: Valpo went 3-0 over the past week to kick off the 2015 league slate. The Crusaders went on the road last weekend, taking down Northern Kentucky (in its first-ever HL match) in four sets before sweeping Wright State. Valpo then returned home to the ARC and defeated UIC Tuesday evening, 3-1.

Following the Crusaders: Friday night’s match will be broadcast on ESPN3.com and on WVUR, with live stats available at ValpoAthletics.com as well. Over the course of the 2015 season, all 15 home matches and most league road matches will be broadcast live on ESPN3.com, while WVUR, Valpo’s student radio station, will also be broadcasting select matches.

Head Coach Carin Avery: In her 14th season as head coach at Valparaiso, Carin Avery has won 327 matches and has led Valpo to three league regular season and tournament titles, as well as three NCAA Tournament appearances. A two-time league Coach of the Year, Avery has coached 40 All-League recipients over her tenure as Crusader head coach. She is Valpo’s all-time leader in both victories and winning percentage, and owns 382 career victories overall as a head coach.

Series Notes: A series which dates back to 1998, when both teams were part of the Mid-Continent Conference, Valpo holds an 18-6 advantage in the all-time series. The Golden Grizzlies have taken three of four matchups since the start of the 2013 campaign, however, including a pair of 3-1 wins last season over the Crusaders.

Scouting the Opposition: Oakland comes to the ARC Friday night, holding a 7-9 overall record on the year and having split its first weekend of league play, falling to Milwaukee in five sets before sweeping Green Bay. The preseason league favorites are led offensively by senior outside hitter Cassie Pelloni, who averages 3.06 kills/set, while junior outside Melissa Deatsch chips in 2.73 kills/set and a team-high 3.11 digs/set.

League Success: The Crusaders are off to a great start in league play, starting 3-0 in Horizon League action for the first time since 2007, as they look to maintain their tradition of being one of the top squads in the Horizon League in 2015. Valpo has finished among the top-four in the league every season since joining the league prior to the 2007 campaign, including four second-place finishes in the last seven seasons. In addition, the Crusaders are the only team to progress to at least the league tournament semifinals each season since they joined the league. Valpo owns a .672 (84-41) winning percentage in Horizon League play since 2007.

Offense Sets a New Mark: Valpo might have been taking on the Flames of UIC Tuesday evening, but it was the Crusaders who were on fire offensively. The Crusaders hit better than .300 in all four sets, ending the night swinging at a .338 clip in the four-set win. Valpo’s hitting percentage was the best in a four-set match in the 25-point rally era and was the highest in any four-set match by a Crusader squad since 2006. The Crusaders committed just 11 attack errors on the night against 62 kills, with no single player committing more than three errors.

Berrington Approaches Another Milestone: Senior setter Kelsey Berrington is best known for running the Crusader offense, but has been solid defensively throughout her career as well, and is approaching her second milestone of the season. With her third dig against Oakland, Berrington will hit the 1,000-dig mark for her career after surpassing the 3,000-assist mark earlier this season. The senior is on pace to fall short of the Crusaders’ all-time top-10 in digs, but is just 203 assists shy of moving into third place in Valpo history in that category and also sits just 11 service aces shy of the Crusaders’ top-10.

Campbell With the Kill: Reigning Horizon League co-Player of the Year Emily Campbell has stepped up for the Crusaders through their first three league matches, helping Valpo to the 3-0 start in HL play. Campbell’s high-water mark for the year in kills prior to league play was 19, but she has surpassed that twice in the first three league match, posting 22 kills in the league-opening win over Northern Kentucky before setting a new career high with 25 kills (on .400 hitting) last time out versus UIC. Over the first three Horizon League contests, the junior is averaging 5.64 kills/set on .321 hitting.

In Search of 20 More Wins: The Valpo volleyball program is already just five wins away from extending an impressive streak this season. The Crusaders find themselves among a prestigious group of programs nationwide, as last year’s 25-win campaign was the 13th straight season the Crusaders captured at least 20 victories. Only 10 Division I volleyball programs have won at least 20 matches in each of the last 13 years, a group which includes Colorado State, Florida, Hawai'i, Nebraska, Ohio, Penn State, Stanford, UNI and Western Kentucky.

Protecting the Home Court: Valpo has especially excelled at the ARC under Carin Avery. In her 13-year tenure at the helm of the Crusaders, they own a 119-31 record (.793) in home matches. Valpo owns a 5-1 mark so far this season on its home court, and has nine more home matches remaining. The Crusaders’ 15 home matches for the season represent the most home contests in a single year since 2001.