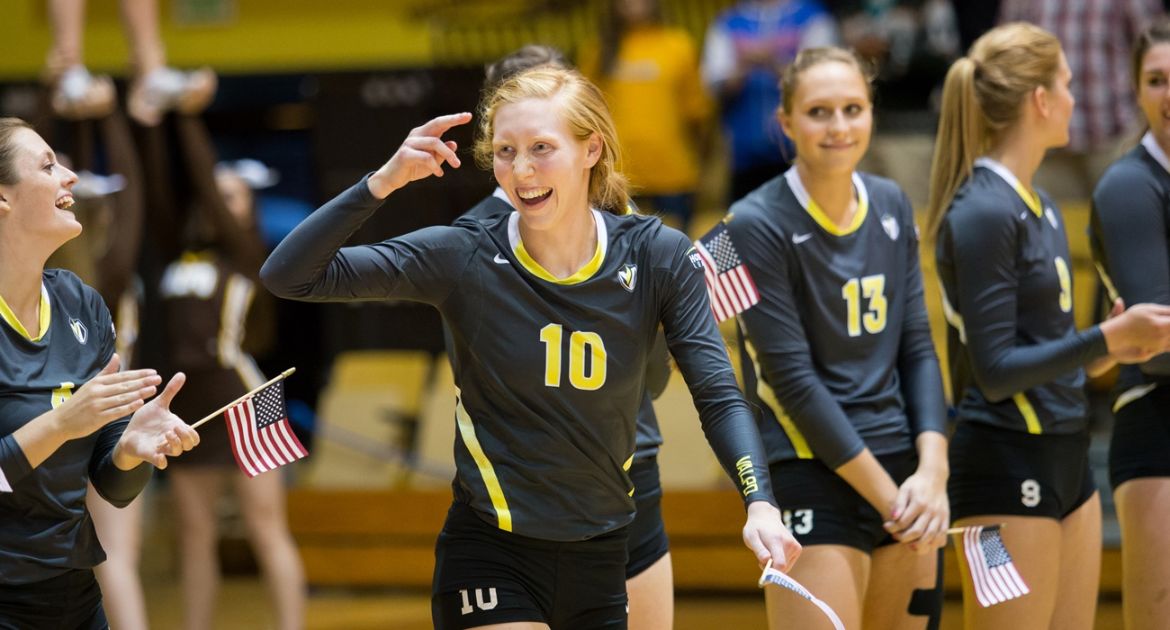 This Week in Crusader Volleyball: The Valparaiso University volleyball team closes out a five-match homestand, hosting Milwaukee and Green Bay in Horizon League play on Friday and Saturday, respectively, before facing Chicago State in non-league action at the ARC Tuesday evening. Friday will serve as the Crusaders’ annual breast cancer awareness match, as survivors of breast cancer will be honored prior to the match. Saturday is Student Appreciation Day and Parents Night as well.

Previously: Valpo dropped a hard-fought four-set match at the ARC last Friday night to defending league champion Oakland. The Crusaders claimed the second set, 25-16, but fell in the other three sets by two points apiece. Sophomore Taylor Graboski set a new career high with 15 kills on .412 hitting in the win.

Following the Crusaders: All three matches over the upcoming week will be broadcast on ESPN3.com and on WVUR, with live stats available at ValpoAthletics.com as well. Over the course of the 2015 season, all 15 home matches and most league road matches will be broadcast live on ESPN3.com, while WVUR, Valpo’s student radio station, will also be broadcasting select matches.

Head Coach Carin Avery: In her 14th season as head coach at Valparaiso, Carin Avery has won 327 matches and has led Valpo to three league regular season and tournament titles, as well as three NCAA Tournament appearances. A two-time league Coach of the Year, Avery has coached 40 All-League recipients over her tenure as Crusader head coach. She is Valpo’s all-time leader in both victories and winning percentage, and owns 382 career victories overall as a head coach.

Series Notes: Milwaukee – The Panthers hold a 23-16 edge in the all-time series with Valpo. Milwaukee has won the last four meetings in the series, including all three last season – most recently a 3-0 decision in the Horizon League semifinals.

Green Bay – Valpo owns a 23-10 advantage in the series with the Phoenix, including wins in five of six matchups over the last three years. The Crusaders swept Green Bay in both meetings last season, with Emily Campbell averaging 5.83 kills/set on .359 hitting and 3.50 digs/set in the two wins.

Chicago State – Valpo has dominated the all-time series against the Cougars, winning 42 of the 43 meetings between the two squads. The teams met up earlier this year at the ISU Classic, with the Crusaders sweeping the Cougars: 25-17, 25-17, 25-13. Katherine Carlson hit .611 with a team-best 11 kills in the win.

Scouting the Opposition: Milwaukee – The Panthers own a 5-12 overall record, but improved to 3-2 in Horizon League play with home wins over Wright State and Northern Kentucky last weekend. Maggie Dunbar leads the Panthers with 3.03 kills/set on .259 hitting, while Myanna Ruiz ranks among the league leaders with 5.19 digs/set.

Green Bay – The Phoenix enter the weekend with an 11-7 record and a 2-3 mark in Horizon League action, with a Friday night match at UIC prior to arriving at the ARC. The balanced Green Bay offense features five players averaging at least two kills per set, with Emily Riese handing out 10.56 assists/set. In the back row, Jillian Bauer leads the league with 5.45 digs/set.

Chicago State – The Cougars, who face UMKC on Friday night in league play, currently are 1-16 overall and 0-4 in WAC play. Elli Woinowsky has led the CSU offense with 3.07 kills/set, while Arieta Vaimaona adds 2.26 kills/set and owns a team-best 24 blocks.

Graboski Earns League Honor: Sophomore middle Taylor Graboski received the first Player of the Week honor of her career from the Horizon League office earlier this week, as she was tabbed the league’s offensive honoree for her performances against UIC and Oakland. Graboski hit .381 with 10 kills in the win over UIC before posting a career-high 15 kills on .412 hitting in the matchup with Oakland. The sophomore is the first Crusader this season to earn a weekly award from the Horizon League.

Ketcham Digs Deep: Sophomore outside Allison Ketcham has been among the league’s most prolific players in the back row this year, especially within league-only play. Ketcham leads all Horizon League non-liberos in digs, averaging 3.36 digs/set on the year, and has bumped her average to 4.67 digs/set within league play, fifth-best in the league. Last time out, she posted a team-high 24 digs against Oakland, her second 20-plus dig effort in the last four matches. The sophomore has also been stellar on serve receive, committing just nine reception errors on the season and boasting a .989 reception percentage during league action.

Bruinsma on the Block: Junior Rachel Bruinsma has seen action mostly in the back row and as outside hitter through her first two and a half years. But among head coach Carin Avery’s shuffling of lineups in the early season, she tried Bruinsma in the middle, and the junior has stuck there. Bruinsma enjoyed the two best matches of her career defensively at the net last week, registering a career-high seven blocks in the win over UIC and following last time out with five rejections versus Oakland. After entering the week with just 48 career blocks in 69 matches (0.25 block/set), Bruinsma tallied 12 in just two contests (1.50/set).

Berrington Reaches 1,000 Digs: Senior setter Kelsey Berrington is best known for running the Crusader offense, but has been solid defensively throughout her career as well, and hit another milestone last time out. With her third dig against Oakland last Friday, Berrington hit the 1,000-dig mark for her career after surpassing the 3,000-assist mark earlier this season. The senior is on pace to fall short of the Crusaders’ all-time top-10 in digs, but is just 157 assists shy of moving into third place in Valpo history in that category and also sits just 11 service aces shy of the Crusaders’ top-10.

In Search of 20 More Wins: The Valpo volleyball program is already just five wins away from extending an impressive streak this season. The Crusaders find themselves among a prestigious group of programs nationwide, as last year’s 25-win campaign was the 13th straight season the Crusaders captured at least 20 victories. Only 10 Division I volleyball programs have won at least 20 matches in each of the last 13 years, a group which includes Colorado State, Florida, Hawai'i, Nebraska, Ohio, Penn State, Stanford, UNI and Western Kentucky.