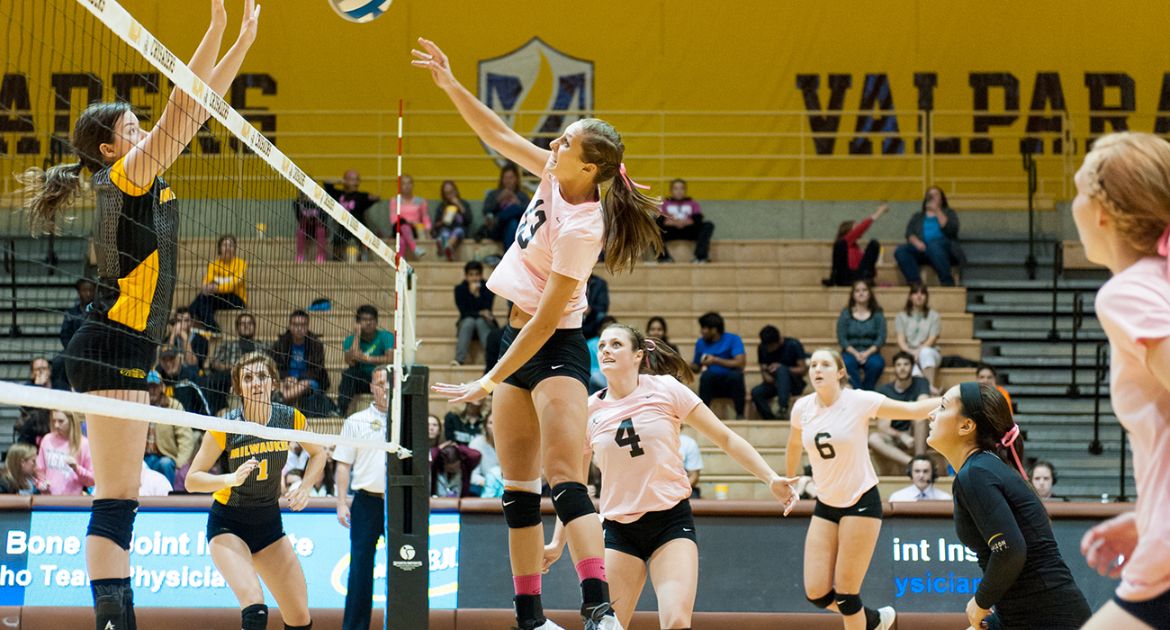 The Valparaiso University volleyball team dropped the first point of the match Friday night at the ARC to Milwaukee, but never trailed in any of the three sets after that mark, as a stellar all-around team effort led the Crusaders to a 3-0 (25-12, 25-12, 25-19) win over the Panthers to improve to 16-3 overall and 4-1 in Horizon League play.

“It was good to see us bounce back after losing last time out and put together a complete game today,” said Crusader head coach Carin Avery. “I felt like our first ball touches, both on serve receive and on attacks, were excellent tonight, allowing our offense to run very effectively.”

Coming off of Horizon League Offensive Player of the Week honors, sophomore Taylor Graboski (Upper Sandusky, Ohio/Upper Sandusky) led the way on both sides of the ball Friday night. Graboski posted a match-best 11 kills on .450 hitting to pace a Crusader offensive attack which hit .343 with just nine attack errors on the match. Defensively, Graboski enjoyed her finest match of the season, recording a season-best seven blocks as Valpo tallied 10 total blocks in the three-set win.

Senior Kelsey Berrington (Britton, Mich./Tecumseh) had a strong all-around match, running the offense to its second-best hitting percentage of the season in handing out 41 assists. Berrington also joined in defensively at the net with a season-best five blocks. Junior Morganne Longoria (Burlington, Wis./Burlington) paced the back-row effort with 12 digs as the Crusaders’ defense limited Milwaukee to .096 hitting.

After the Panthers won the first point of the opening set, the Crusaders responded with eight of the next 10 points – capped by a solo block from Berrington – to force a Milwaukee timeout. The stoppage did little to slow down the Valpo train in the opening set, however, as the Crusaders continued to extend their lead. The advantage reached double figures at 20-10 on a rejection by Berrington and Graboski, and Valpo would close the set on a 5-0 run, including two kills from Currier and punctuated by a block by Currier and Campbell.

The second set was all tied up at 5-5 before a big Valpo run gave the Crusaders plenty of breathing room. A 9-1 spurt, featuring a trio of Valpo service aces and two kills apiece by Currier and Campbell, pushed the lead out to 14-6. Milwaukee would close back to within 15-10, but Valpo ended the frame on a 10-2 run and took the two sets to none lead into the in-game break on a kill out of the middle from freshman Sydney Bronner (Frankenmuth, Mich./Frankenmuth).

The third set would stay tightest the longest, as while Valpo led start to finish, the Panthers hung around. Leading just 17-14, the Crusaders scored three straight points – including two kills by Carlson – to seemingly pull away, but Milwaukee responded with three straight points of its own. Kills from Carlson and freshman Lizzie Zaleski (Oak Lawn, Ill./Marist) pushed the advantage back to five points, however, and Milwaukee would get no closer than four points the rest of the way. Valpo eventually closed out the victory on its first match point attempt as Graboski pounded down an overpass.

Valparaiso (16-3, 4-1 Horizon) looks to make it a perfect weekend Saturday afternoon as the Crusaders host Green Bay at the ARC at 4 p.m. It is the program’s Parents Day, recognizing the parents of the players, and is also Student Appreciation Day. The match can be seen live on ESPN3.com, with live audio and stats also available via ValpoAthletics.com.