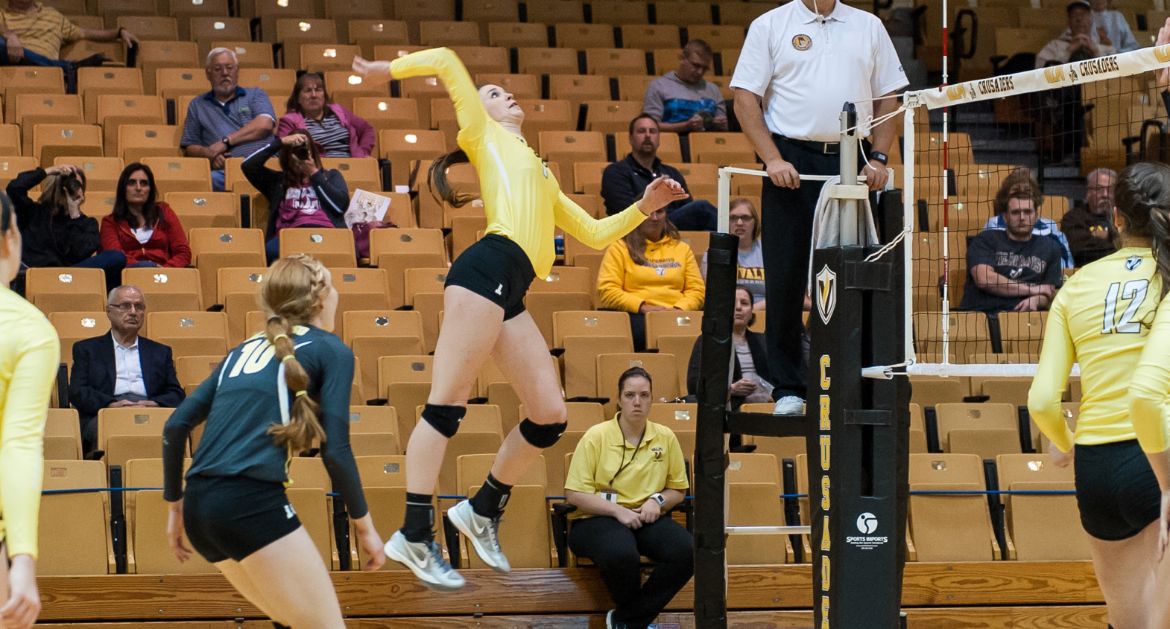 Facing its second five-set match in less than 24 hours, the Valparaiso University volleyball team rallied from down two sets to one to come out with a 3-2 (21-25, 25-23, 24-26, 25-20, 15-11) road win at Youngstown State Saturday afternoon. Fittingly, the match ended on a kill from Emily Campbell (Grand Rapids, Mich./Forest Hills Central), as earlier in the match, the junior became the 14th player in Crusader program history to surpass 1,000 career kills.

Campbell entered Saturday’s contest with 996 career kills and registered her 1,000th career kill just past the midway mark of the opening set. The junior would go on to finish the day with a match-high 25 kills, matching her career high, while hitting at a .317 clip. Her 25 kills were the most in a five-set match by a Crusader in the 25-point rally scoring era.

Campbell’s milestone was one of just many accomplishments for the Crusaders on Saturday as they filled up the stat sheet in the five-set win. The junior also recorded five service aces on the day, matching the most by a Valpo player in the 25-point era. Senior setter Kelsey Berrington (Britton, Mich./Tecumseh) moved into third place in Crusader history in assists, handing out 36 helpers to finish the day with 3,549 career assists and surpass Kim Bukowski for third-most all-time at Valpo.

Junior Lexie Bouza (Elgin, Ill./Burlington Central) was pressed into action over the final four sets at libero and took full advantage, recording new career highs in both digs with 23 - tying for match-high honors – and assists with six. Freshman Lizzie Zaleski (Oak Lawn, Ill./Marist), one night after setting a new career best with 11 kills, matched that mark on Saturday, swinging at a .375 clip.

As a team, the Crusaders posted some of their highest totals since the move to 25-point rally scoring. Valpo finished the match with 81 kills – 20 more than Youngstown State and the most in any match since 2006. The Crusaders also tied their high in the 25-point era with 75 assists and totaled 104 digs, fourth-most in a single match in that span.

Campbell led the way offensively, but got some help from an unlikely source on Saturday. Sophomore Allison Ketcham (Mishawaka, Ind./Marian), who played libero on Friday night and started the match there Saturday, moved back to her traditional outside hitter position before set two and immediately sparked the offense, finishing with 16 kills in her four sets on the attack. Zaleski’s 11 kills rounded out the trio of Crusaders in double figures in the category.

Valpo trailed from the start of the opening set, but made a late push to tie it at 19-19 before YSU went on a 6-2 run to claim the opener. A four-point spurt in the second set, including consecutive kills from Ketcham, turned an 18-16 deficit into a 20-18 lead, and the Crusaders would not surrender the lead, eventually evening the match on a Campbell kill for the 25-23 set win.

Leading 17-13 in the third set, the Crusaders surrendered six straight points to give up the lead, but rallied back with a 4-1 spurt to go ahead 21-20. YSU scored four of the next five points, however, to go up 24-22, and despite Valpo holding off two set point chances, the Penguins closed with back-to-back points for the 26-24 win to go ahead two sets to one.

Valpo looked to run away early in the fourth set, hitting the halfway point ahead 13-2, but YSU responded with a 9-1 run to stay within striking distance. The Penguins would close within as few as two points in the latter stages, but Campbell tallied four of her kills in Valpo’s last nine points of the set to send the match to a decisive fifth frame.

Valpo never trailed in the fifth set, but YSU tied the frame twice, the later time coming at 5-5. Four straight points from the Crusaders made it 9-5 before the Penguins responded with three straight. But after the teams traded sideouts, Valpo recorded three straight kills – getting two terminations from Campbell and one by sophomore Taylor Graboski (Upper Sandusky, Ohio/Upper Sandusky) – to push the lead out to four points at 13-9. From there, it was academic, as it was fittingly Campbell who closed out the match.

“It was a rough weekend for us – both Cleveland State and Youngstown State came to play,” said Crusader head coach Carin Avery. “I’m happy to be leaving this weekend 1-1, because every weekend in our league is tough. You have to be physically and mentally ready to play, and at times this weekend, we weren’t ready. We had a great grind tonight and found a way to pull out the win not playing our greatest volleyball. Our team has been so adaptable this season, and they were again this weekend, as we used several different lineups to find a good rhythm.”

Valparaiso (18-5, 5-3 Horizon) steps out of league play for the final time in the regular season on Wednesday evening at the ARC, as the Crusaders host IPFW at 6 p.m. The match can be seen live on ESPN3.com, with live audio and stats also available via ValpoAthletics.com.