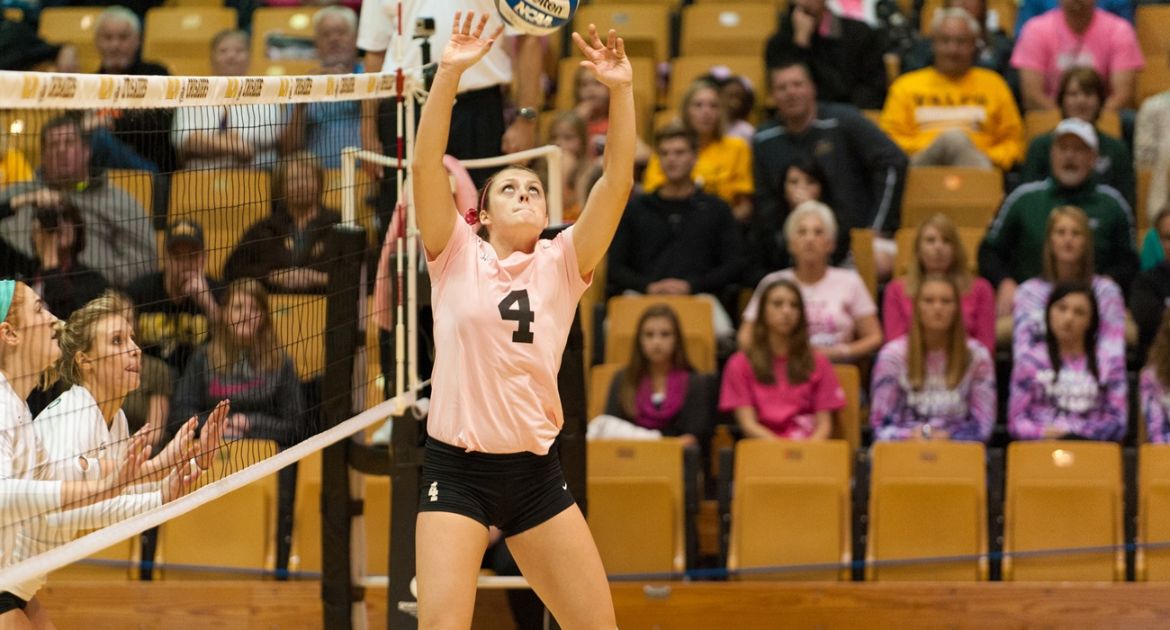 This Week in Crusader Volleyball: The Valparaiso University volleyball team returns home to the ARC again this week, as the Crusaders will host three matches over a four-day stretch. The homestand opens Wednesday evening with a non-league showdown against IPFW, before the Crusaders return to league play Friday versus Wright State and Saturday versus Northern Kentucky.

Previously: Valpo split a Horizon League road trip last weekend. Making the swing through northeast Ohio, the Crusaders were up two sets to one at league-leading Cleveland State before falling 3-2. The next day, Valpo reversed course, rallying from a 2-1 deficit for a 3-2 win at Youngstown State.

Head Coach Carin Avery: In her 14th season as head coach at Valparaiso, Carin Avery has won 330 matches and has led Valpo to three league regular season and tournament titles, as well as three NCAA Tournament appearances. A two-time league Coach of the Year, Avery has coached 40 All-League recipients over her tenure as Crusader head coach. She is Valpo’s all-time leader in both victories and winning percentage, and owns 385 career victories overall as a head coach.

Series Notes: IPFW – The Mastodons own a 12-7 edge in the all-time series over the Crusaders, but Valpo has won the last two meetings. Last season, the two squads met in Fort Wayne, where the Crusaders won a five-set thriller, taking the fifth set 16-14. Emily Campbell led Valpo in the win with 23 kills on .320 hitting.

Wright State - Valpo owns a 19-14 advantage in the all-time series over the Raiders and has defeated WSU 15 consecutive times dating back to 2008. The Crusaders made it three straight sweeps over the Raiders earlier this season in Dayton, with Campbell posting a match-high 15 kills in the win.

Northern Kentucky – After having not faced NKU since 1985 (an NKU win), the Crusaders traveled to Highland Heights, Ky. for the Norse’s first Horizon League match earlier this season and beat NKU in four sets. Campbell tallied 22 kills, while Allison Ketcham added 17 kills and 25 digs.

Scouting the Opposition: IPFW – The Mastodons enter Wednesday night’s match at 6-17 overall this season, but with a 3-3 record in their last six outings. Somer Johnson is the focal point of the IPFW offense, averaging 3.94 kills/set, while Olivia Hahn has tallied 4.53 digs/set from the libero position this year.

Wright State – The Raiders enjoyed one of their strongest non-league segments in recent history this year, going 11-4 outside of league play, but have struggled so far in HL play, entering Friday’s match with a 1-7 league record. Katie Klusman ranks among the league leaders with 4.21 kills/set, while Maddie Lohmeier has handed out 11.12 assists/set.

Northern Kentucky – The Norse make their first visit to the ARC, entering the weekend at 8-12 overall and 3-5 in league action prior to their Friday night match at UIC. Haley Libs and Keely Creamer both average just over three kills per set, while Mel Stewart tallies 4.40 digs/set on the back line.

Campbell Earns Acclaim: Matching a career high. Reaching a milestone. Earning Player of the Week honors. All in a week’s work for junior outside hitter Emily Campbell. Over the Crusaders’ three matches last week, Campbell averaged 4.38 kills/set on .321 hitting, including a 14-kill, .538 performance in a sweep of Chicago State. With her fourth kill Saturday at Youngstown State, the junior became the 14th player in Crusader history to reach the 1,000-kill mark for her career. Then, she eventually closed the win over the Penguins with her 25th kill of the match, tying her career high. Campbell was named the HL Offensive Player of the Week on Monday, her third career weekly honor from the league office.

Whirlwind Week For Ketcham: Sophomore Allison Ketcham saw her role shift and then shift again over the course of the Crusaders’ three matches last week. With regular libero Morganne Longoria sidelined due to injury, Ketcham was tabbed to fill in Tuesday versus Chicago State and Friday at Cleveland State and did so well, totaling 48 digs over the two matches, including a career-high 27 versus the Vikings. But then, after starting the match at libero at Youngstown State and tallying nine first-set digs, Ketcham was moved back to outside hitter for the final four sets and made her mark on both sides of the ball, finishing with 23 digs and 16 kills on .283 hitting. For the season, Ketcham is averaging 3.68 digs/set, good for seventh in the league and most among non- liberos.

Berrington Keeps Moving Up: Senior Kelsey Berrington continued to move up the Crusaders’ career assists chart last week, moving past Kim Bukowski and into third position as she closed the YSU match with 3,549 career assists. While she will remain slotted in third place in the Valpo record book in the assists category, Berrington looks to break into the Crusaders’ top-10 in career aces as well, as she enters the week with 118 aces – just six shy of the chart in that category. This year’s squad is challenging for the best team hitting percentage in a season as well, set just last year, which will give Berrington the distinction of being the primary setter for the top two attacking seasons in program history.

Many Marks Set Saturday: The five-set win at Youngstown State saw the Crusaders post some of their highest stat totals since the move to 25-point rally scoring in 2007. Campbell’s 25 kills were the most by a Crusader in a five-set match in that time frame, while her five service aces matched the most by a Crusader since 2007. As a team, Valpo’s 81 kills were the most in a single match since 2006, while its 75 assists tied the high in the 25-point era and 104 digs ranked fourth in that span. A couple career highs were set as well, as Lizzie Zaleski tallied 11 kills – her second straight match with 11 kills after entering the weekend with a career high of eight – and Lexie Bouza racked up 23 digs after filling in at libero in the final four sets.

In Search of 20 More Wins: The Valpo volleyball program is already just two wins away from extending an impressive streak this season. The Crusaders find themselves among a prestigious group of programs nationwide, as last year’s 25-win campaign was the 13th straight season the Crusaders captured at least 20 victories. Only 10 Division I volleyball programs have won at least 20 matches in each of the last 13 years, a group which includes Colorado State, Florida, Hawai'i, Nebraska, Ohio, Penn State, Stanford, UNI and Western Kentucky.