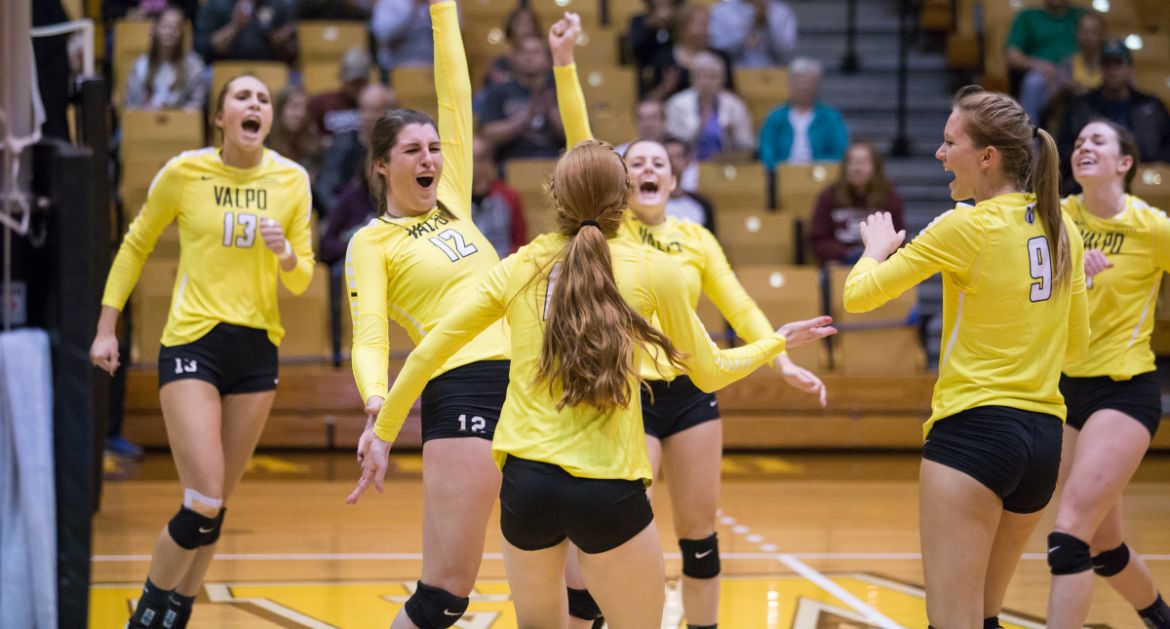 The Valparaiso University volleyball team reached the 20-win milestone for the 14th consecutive season on Friday evening at the ARC and did so in emphatic fashion, sweeping Wright State, 3-0 (25-6, 25-11, 25-21) in Horizon League action.

The Crusaders entered the season having won at least 20 matches in each of the last 13 seasons and were one of just 10 programs in the nation that could make that claim. Valpo was the second of that group of 10 to reach the 20-win mark again this year, joining Western Kentucky, which did so last week. The Crusaders earned their 20th win in just their 25th match of the season, tying for the third-quickest team to the mark in program history – only the 2004 squad (20-3) and the 2013 team (20-4) reached 20 wins in fewer matches.

Valpo put its foot down from the get-go in the opening set and never let up, swinging at a .517 clip with 15 kills in the opener while limiting WSU to just five kills against 10 attack errors. The Raiders’ sole consecutive points of the set came early on, cutting the Crusader edge to 4-2, but Valpo scored 21 of the final 25 points of the frame to easily claim the opener. Junior Emily Campbell (Grand Rapids, Mich./Forest Hills Central) matched WSU’s output with five kills of her own in the first set, while four other Crusaders tallied multiple kills as well without committing an attack error.

WSU claimed an early lead in the second set, but again Valpo took control, this time using an 8-1 run to go up 12-5 approaching the midway point. The Raiders would get back to within five points at 14-9, but the Crusaders went on an 11-2 spurt to go into the in-game break up two sets to none. The Valpo defense stood out again in the second set, again limiting the Raiders to just five kills.

The third set would see enough back-and-forth action for seemingly an entire match, however, as it featured 19 tie scores and 11 lead changes. Neither squad led by more than two points until the very late stages of the set. But trailing 19-18, it would be the Crusaders who came up with the big run, scoring six of the next seven points – capped by a service ace from freshman Katherine Carlson (Lake Orion, Mich./Notre Dame Prep) – to earn match point at 24-20. On Valpo’s second chance to win the match, redshirt freshman Kayla Currier (Frankfort, Ill./Lincoln-Way East) hammered home an overpass to cap the sweep.

The final point of the match closed out a strong day offensively for Currier, who finished with eight kills on .538 hitting from the right side. Sophomore Allison Ketcham (Mishawaka, Ind./Marian) paced Valpo with 11 kills, while sophomore Taylor Graboski (Upper Sandusky, Ohio/Upper Sandusky) added nine kills on .350 hitting and Campbell finished with seven terminations while only playing the first set and a half.

Senior Kelsey Berrington (Britton, Mich./Tecumseh) picked up a double-double on Friday evening, handing out 31 assists and totaling 15 digs. Ketcham joined Berrington in the double-double club with 13 digs of her own, while junior Lexie Bouza (Elgin, Ill./Burlington Central) chipped in 12 digs. Junior Morganne Longoria (Burlington, Wis./Burlington), returning after missing the last four matches due to injury, led Valpo with 17 digs. Graboski led the Crusader effort at the net with five blocks on Friday as Valpo totaled nine team blocks.

Megan Hopkins led Wright State (12-12, 1-8 Horizon) with 13 kills, but the rest of the Raiders combined for just 11 kills as the Crusader defense held WSU to .008 hitting for the match. Jessie Thornton picked up a match-high 20 digs in the losing effort.

Valparaiso (20-5, 6-3 Horizon) looks to extend its winning streak within league play to three straight matches on Saturday afternoon as the Crusaders host Horizon League newcomer Northern Kentucky at 4 p.m. The match can be seen live on ESPN3.com, with live stats also available via ValpoAthletics.com.