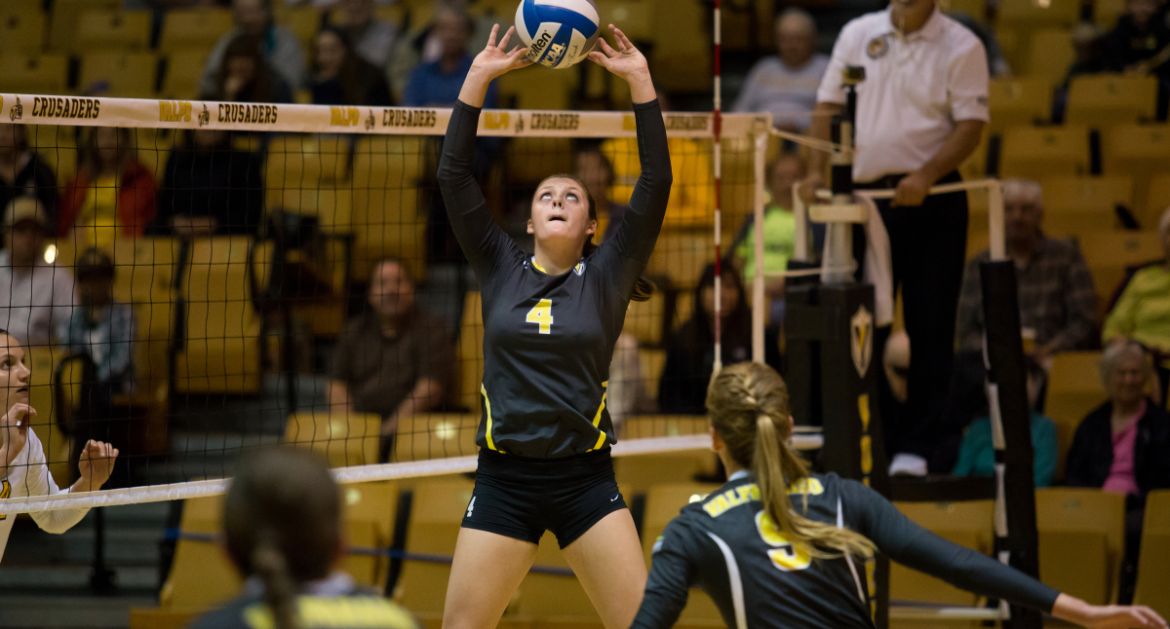 The Valparaiso University volleyball team made sure its lone senior, setter Kelsey Berrington (Britton, Mich./Tecumseh), would go out a winner in her final career match at the ARC, as the Crusaders downed league regular season champion Cleveland State Saturday evening, 3-1 (25-20, 25-19, 23-25, 25-18). Valpo heads to the Horizon League Championship in Cleveland next weekend as the third seed, and will face sixth-seeded Milwaukee Friday afternoon at 3:30 p.m. CT.

In her final home match, Berrington picked up the 10th double-double of her season, recording 34 assists and tallying 12 digs. The victory was the 96th that Berrington has been a part of in the Crusader uniform over the last four years, as she has played each and every match during her time at Valpo.

Valpo led start to finish in the opening set against the Vikings, who had secured the Horizon League regular season title on Friday. An early five-point run staked the Crusaders to a 7-1 lead, and just past the midway point of the set, Valpo strung together five more points in a row – including two kills from sophomore Allison Ketcham (Mishawaka, Ind./Marian) and an ace by junior Morganne Longoria (Burlington, Wis./Burlington) – to pull ahead 20-13 and take control.

The second set began in similar fashion, as Valpo jumped out to an early 6-2 advantage following a service ace from freshman Katherine Carlson (Lake Orion, Mich./Notre Dame Prep). Cleveland State rallied again to within 8-7, but this time the key run would come earlier for the Crusaders to take control. Valpo scored eight of the next 10 points, including three kills by Carlson – the last of which made it 16-9 Crusaders, and Valpo’s lead wouldn’t fall under four points the rest of the way.

It was the Vikings who took control in the third set, as CSU scored the first four points and never trailed. The Crusaders tied the set on five occasions, the latest coming at 17-17, but never were able to get over the hump. Trailing 24-21, a CSU service error and a kill by freshman Lizzie Zaleski (Oak Lawn, Ill./Marist) held off two Viking set points, but Cleveland State got a kill from Gina Kilner on its third chance to force a fourth set.

The fourth set proved to be one of the most entertaining at the ARC all season. CSU jumped out to another quick 4-0 lead and would maintain the advantage until the Crusaders put together three consecutive points, including a kill and a block from redshirt freshman Kayla Currier (Frankfort, Ill./Lincoln-Way East) to tie the set at 11-all.

The Vikings took a timeout and came out of the stoppage with four consecutive points, forcing a Valpo timeout. But out of that break, it was the Crusaders who took control in a big way, with the crowd at the ARC seemingly building to a crescendo point-by-point. The run started with a kill from Currier and an ace by Carlson before the defense took over. Currier picked up a solo block to make it a one-point deficit, and then combined with Ketcham on a rejection to tie things up at 15-all and force a CSU timeout.

The timeout would hardly slow down Valpo, however, as Ketcham picked up a kill to give Valpo the lead, followed by a pair of Viking errors to make it 18-15. CSU earned a kill to briefly quell the momentum, but a kill from Currier returned the serve to Valpo and a block by Ketcham and sophomore Taylor Graboski (Upper Sandusky, Ohio/Upper Sandusky) pushed the lead to 20-16. Longoria then stepped up with back-to-back service aces as the crowd roared, and the result was academic from there. Berrington would close her career on the ARC floor with an assist on Valpo’s final point, setting up Ketcham for the match-ending kill.

Carlson stepped up for Valparaiso (25-7, 11-5 Horizon) when called upon off the bench Saturday, tallying a new career-high 15 kills while also posting 13 digs for a double-double. Ketcham added 10 kills and 15 digs, and Longoria paced Valpo in the back row with 21 digs. Currier and freshman Sydney Bronner (Frankenmuth, Mich./Frankenmuth) were each in on four of Valpo’s eight team blocks.

Links for live coverage from the Horizon League Championship in Cleveland will be available in the coming days.