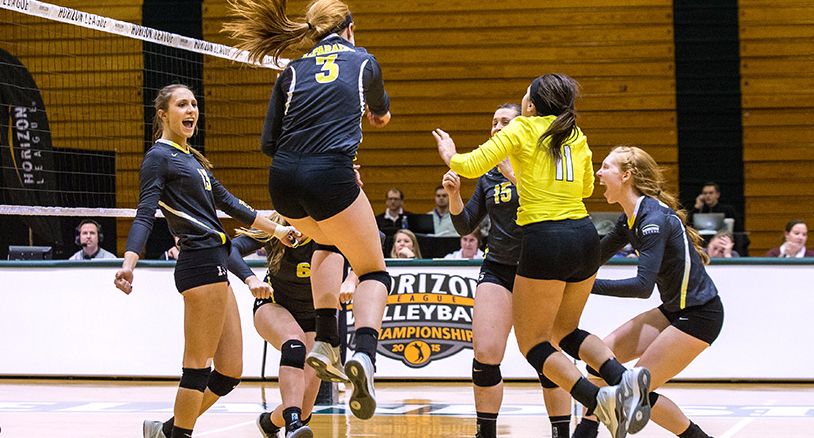 The Valparaiso University volleyball team moved one step away from capturing the Horizon League title and the corresponding automatic bid to the NCAA Tournament, as the third-seeded Crusaders defeated second-seeded Oakland Saturday evening, 3-1 (21-25, 25-22, 32-30, 25-21), in semifinal action at the Horizon League Championship in Cleveland, Ohio. With the win, the Crusaders will face top-seeded Cleveland State for the title Sunday afternoon at 1 p.m. CT.

After having to rally from down two sets to one on Friday to advance in their first-round matchup, the Crusaders found themselves down a set after Oakland scored six of the final seven points of the first set to erase a 20-19 Valpo lead. But Valpo would be the squad with a late rally in set two, overcoming a 20-19 deficit with four straight points – including a pair of kills from freshman Katherine Carlson (Lake Orion, Mich./Notre Dame Prep) – to go ahead 23-20, and the Crusaders just sided out the rest of the way, sending the match into the in-game break tied at one set each.

Then came a third set which befits the phrase ‘instant classic’. Oakland held a lead very early in the set, but the Crusaders would take the advantage and never trail again in the frame. The lead was around 2-3 points as the set crossed the halfway mark, and Valpo would push the lead out further as it neared 25, posting three straight points on a kill and an ace by Carlson and a kill from sophomore Allison Ketcham (Mishawaka, Ind./Marian) to lead late 21-16.

Oakland would score the next three points to move within two before Carlson came up with a kill out of a Valpo timeout. The Golden Grizzlies scored two more to close within 22-21, and following a Ketcham kill, Oakland scored two more in a row to tie the frame at 23-all. A kill by freshman Lizzie Zaleski (Oak Lawn, Ill./Marist) gave the Crusaders set point at 24-23, but a Valpo attack error meant the set would go to extra points.

Each of the next six tie scores, Valpo would claim the point – four of them on kills, two by freshman Kayla Currier (Frankfort, Ill./Lincoln-Way East) – to earn set point opportunities. But each time, Oakland was there to tie the score yet again. Finally, with the score 30-30, Currier picked up another kill to give Valpo its eighth set point chance, and this time, the Crusaders would convert, as an Oakland attack error put the Crusaders ahead two sets to one.

“I think the third set was a big turning point,” said Crusader head coach Carin Avery. “There was so much emotion in that set, and I thought if we could pull it out, good things can happen after that. We didn’t play well at the end of that set, but we pulled it out and that’s all that matters – you have to win ugly sometimes!”

While Valpo took the lead in the match with the third-set win, the momentum didn’t immediately present itself early in the fourth set, as Oakland claimed the early advantage and led at 10-8. But the Crusaders rallied to take the lead for good, scoring eight of the next 10 points – including three kills by Currier – to go ahead 16-12. Valpo prevented Oakland from a big run the rest of the way, never surrendering more than two straight points, and earned match point at 24-19 following a Zaleski kill. The Crusaders would clinch their berth in the championship match on their third chance on a kill from Carlson.

Once again, Ketcham stepped up to shoulder the load offensively for Valpo on Saturday, finishing with 20 kills to lead all players. The sophomore, who entered the league tournament with a career high of 18 kills, has surpassed that mark in both of the Crusaders’ tournament matches.

Carlson and Currier both added 13 kills apiece on the offensive side of the ball, Currier doing so on .440 hitting, while Zaleski chipped in nine kills. Senior Kelsey Berrington (Britton, Mich./Tecumseh) handed out 31 assists, while sophomore Tarrah Lasky (Valparaiso, Ind./Valparaiso) dished out 26 assists of her own.

Defensively, junior Morganne Longoria (Burlington, Wis./Burlington) led a 96-dig team effort with 24 digs. Carlson, Berrington and Ketcham all finished with double-doubles, as they tallied 20, 17 and 15 digs, respectively. At the net, Currier led the Crusaders with five blocks.

“It has been a total team effort so far this weekend,” said Avery.  “I don’t mean just the players on the court, either – everyone has pulled together and it’s been all about the team.”

Valparaiso (27-7) will make its fourth appearance in the Horizon League Championship title match since joining the league in 2007, and is looking for its first league tournament crown. The Crusaders are also looking to return to the NCAA Tournament for the first time since 2005. To do so, the Crusaders will have to get through top-seeded Cleveland State, which they split two matches with during the regular season. The match, slated for a 1 p.m. CT first serve, can be seen live on ESPN3.com and heard live on WVUR (95.1 FM, Valparaiso). Links for the live video, audio and stats will be available via ValpoAthletics.com.