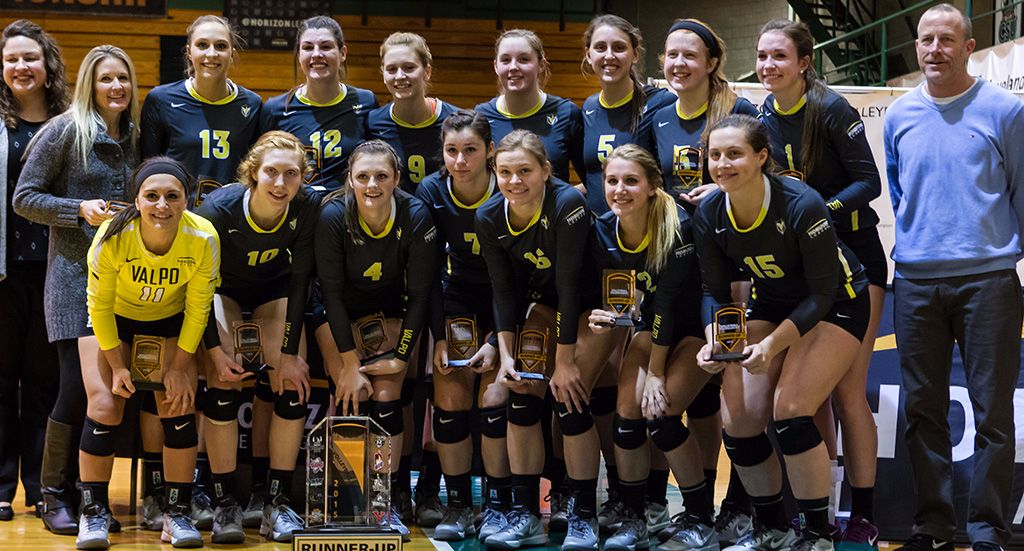 The Crusaders made it to Sunday’s championship match with a five-set win Friday over Milwaukee and then a four-set win on Saturday over defending league champion Oakland. But playing for a third straight day, and doing so without All-League outside hitter Emily Campbell (Grand Rapids, Mich./Forest Hills Central) due to injury, Valpo ran into a buzzsaw in the regular season champion Vikings on Sunday.

“It was such a terrific weekend for us – we had a blast both off and on the court,” said Crusader head coach Carin Avery. “We just ran out of gas today. It is tough playing a third match in three days, especially given how difficult both our first two matches were. Give Cleveland State credit as well – they played amazing this afternoon.”

Cleveland State led nearly start to finish in the opening set, taking control with an early 6-1 run. Valpo pulled out to a quick 4-1 edge in the second set and still led at 6-5, but the Vikings went on a 10-0 spurt to head into the locker room up two sets to none. The Crusaders fought back from an early five-point deficit in the third set, closing to within one point at 17-16, but following a CSU timeout, the Vikings scored five straight to seize control, as they would eventually clinch the title on their second match point chance.

Berrington earned her spot on the All-Tournament Team after tallying 73 assists and 30 digs over the tournament’s three matches, helping run the Valpo offense as it hit at better than a .250 clip in each of its first two matches. Ketcham led the Crusaders on the attack, averaging an even 4.00 kills/set while hitting .255 and contributing 2.75 digs/set as well.

The loss closes out another successful season for the Valpo volleyball program. The Crusaders went 27-8 on the season, matching the second-most wins in a single season in program history and extending their streak of 20+ win seasons to 14 straight. Valpo hit at a .236 clip for the year, fourth-best in a year in Crusader history, while also cracking the program single-season top-10s for kills, assists and digs despite playing in the 25-point rally scoring era.

Sunday’s match also closed out the career of Valpo’s lone senior in Berrington. Missing no matches in her four-year Crusader career, Berrington was a part of 98 victories at Valpo. She closes out her time at Valpo with 3,956 career assists, third-most in program history, 1,184 digs and 121 service aces.

“I’m so happy for Kelsey that she got to play in a championship match,” said Avery. “The only reason we made it this far was her outstanding leadership. We have 13 players coming back, and are already looking forward to the spring!”