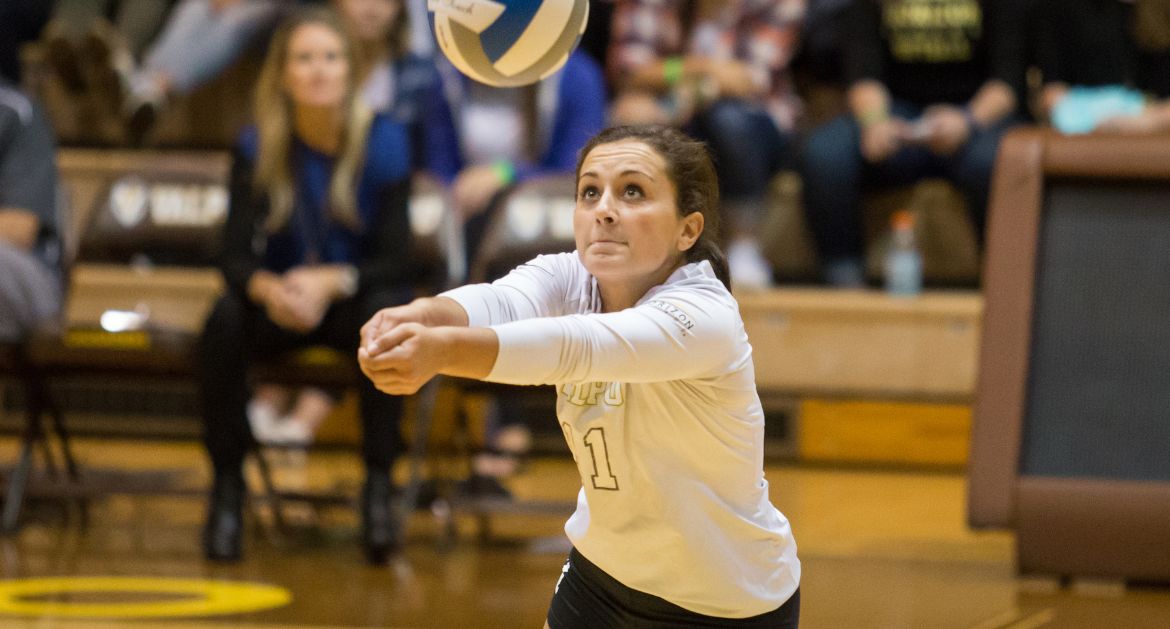 This Week in Crusader Volleyball: The Valparaiso University volleyball team will complete one final week of non-league competition before jumping into the Horizon League slate next weekend. The Crusaders will travel to Bowling Green for a mid-week match on Tuesday evening before heading to Muncie, Ind. for the Ball State Active Ankle Challenge this weekend, where they will face #19 Ohio State and UNC Greensboro in addition to the host Cardinals.

Previously: Valpo split four matches as it hosted the Popcorn Classic last weekend. The Crusaders swept SE Missouri State and South Dakota State, while falling in four sets to Central Michigan and Duquesne. CMU and Duquesne tied atop the tournament standings, as both teams finished the weekend 3-0.

Looking Ahead: The Crusaders remain on the road next weekend to kick off Horizon League action. Valpo will travel to Green Bay for a Friday night match on Sept. 23 before playing at UIC the next afternoon.

Following the Crusaders: The Bowling Green and Ball State matches this week will be streamed live on ESPN3, and also are accessible via WatchESPN and the ESPN app. Live stats will be available for all four matches this week as well. Links for all the live coverage can be found at ValpoAthletics.com.

Head Coach Carin Avery: In her 15th season as head coach at Valparaiso, Carin Avery has won 345 matches (345-136) and has led Valpo to three league regular season and tournament titles, as well as three NCAA Tournament appearances. A two-time league Coach of the Year, Avery has coached 40 All-League recipients over her tenure as Crusader head coach. She is Valpo’s all-time leader in both victories and winning percentage, and owns 400 career victories overall as a head coach, reaching the milestone last Saturday with the win over South Dakota State.

Series Notes: Bowling Green - Tuesday's match marks the fourth meeting all-time between the Crusaders and the Falcons, with BGSU winning all three prior matchups. Valpo fell at BGSU on Sept. 15, 2007 by a 3-2 final in the last meeting.

Ohio State - The Buckeyes have captured both previous meetings with the Crusaders, including most recently a three-set sweep on Sept. 21, 2013 in Buffalo, N.Y. Including this year's matchup, OSU has been nationally ranked in all three matchups.

Ball State - Valpo is just 1-8 all-time against the Cardinals, but just two of those contests have been played since 1990. The Crusaders swept BSU in 2004, while the Cardinals earned a three-set win over Valpo early in the 2011 season.

Scouting the Opposition: Bowling Green - The Falcons enter Tuesday night's match with a 6-3 record on the year, most recently winning the EIU Panther Classic last weekend. BGSU is hitting at a .272 clip so far this year, paced by Jelena Sunjic, who is hitting .392 with 4.08 kills/set.

Ohio State - The nationally-ranked Buckeyes are 7-2 entering this weekend's tournament, going 2-1 last weekend at the Dr. Mary Jo Wynn Invitational at Missouri State - including a five-set win over Green Bay. Taylor Sandbothe is hitting a team-best .396 with 3.80 kills/set early this year and also paces the Buckeyes with 1.11 blocks/set.

Ball State - The Cardinals have struggled so far this season, owning just a 2-9 record entering this weekend, but are coming off back-to-back victories over Morehead State and Appalachian State.

UNC Greensboro - The Spartans are 4-5 thus far in 2016 and won the Spartan-Aggie Invitational last weekend with victories over Radford, North Carolina A&T and Hampton. Four different Greensboro players are averaging at least two kills per set, led by 3.78 kills/set from Ashley Muench.

Avery Reaches 400: Posting at least 20 wins year after year, head coach Carin Avery reached the 400-win milestone for her career on Saturday afternoon with the Crusaders' win over South Dakota State. The program's all-time winningest head coach, Avery is one of just 51 active Division I head coaches with 400 career wins, and is one of just two (Bobbi Petersen - UNI) who currently own at least 400 career wins and have been a head coach for 17 seasons or fewer.