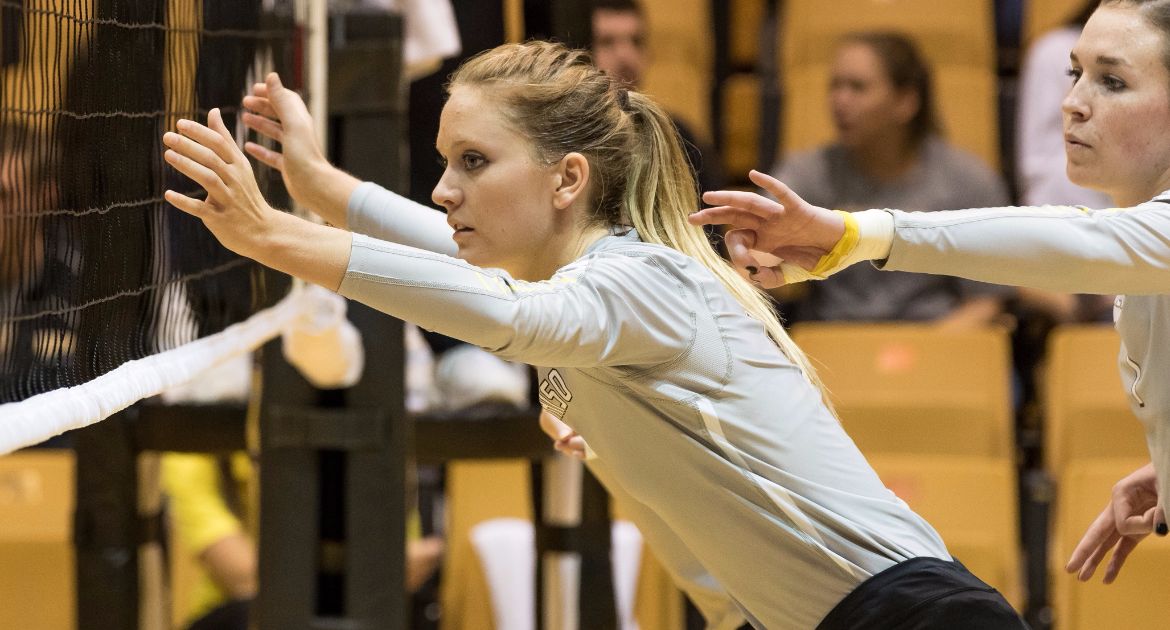 This Week in Crusader Volleyball: The Valparaiso University volleyball team continues Horizon League play with a pair of matches this week, closing out a four-match road trip at Oakland on Wednesday evening before returning home to the ARC to host Milwaukee Saturday evening. Saturday's match against the Panthers will serve as the Crusaders' annual breast cancer awareness match, as survivors of breast cancer will be honored prior to the match.

Previously: Valpo earned a non-league victory early last week at Western Illinois, but the road proved unkind to the shorthanded Crusaders during league play last weekend, as they fell at Northern Kentucky, 3-0, and at Wright State, 3-2.

Looking Ahead: The Crusaders step away from league action next Tuesday night with a match at Chicago State, and then return to league play at the ARC next weekend with contests versus Wright State (Friday) and Northern Kentucky (Saturday).

Following the Crusaders: Both of this week's matches will be streamed live on ESPN3, and also are accessible via WatchESPN and the ESPN app. Links for the live video, as well as live stats, can be found at ValpoAthletics.com.

Head Coach Carin Avery: In her 15th season as head coach at Valparaiso, Carin Avery has won 347 matches (347-145) and has led Valpo to three league regular season and tournament titles, as well as three NCAA Tournament appearances. A two-time league Coach of the Year, Avery has coached 40 All-League recipients over her tenure as Crusader head coach. She is Valpo’s all-time leader in both victories and winning percentage, and owns 402 career victories overall as a head coach, reaching the 400-win milestone earlier this season with the Crusaders' win over South Dakota State.

Series Notes: Oakland - Valpo owns a 20-7 advantage in the all-time series with the Golden Grizzlies, but OU holds a narrow 4-3 edge since joining the Horizon League prior to the 2013 season. Last season, the Crusaders earned wins in two of the three meetings - Oakland won 3-1 in Valpo, the Crusaders returned the favor at Oakland in straight sets, and in the rubber match, Valpo took down the Golden Grizzlies 3-1 in the semifinals of the Horizon League Championship.

Scouting the Opposition: Oakland - The Golden Grizzlies enter Wednesday night's match at 13-7 overall and tied atop the Horizon League standings at 5-1 in league action, most recently earning wins over UIC (3-2) and Green Bay (3-0) last weekend. Melissa Deatsch paces a balanced Oakland offense with 2.96 kills/set, while defensively, Krysteena Davis averages better than a block per set.

Milwaukee - The Panthers enter the week at 10-7 overall and 4-2 in Horizon League play, and will visit Oakland Friday evening before taking on the Crusaders on Saturday. Four Milwaukee players average at least 2.25 kills/set, led by 3.15 kills/set from Caitlin Schultz, while Myanne Ruiz tallies 4.23 digs/set in the back row at libero.

Milestone Watch For Longoria: Senior libero Morganne Longoria enters this week on the verge of hitting a big milestone in the back row. Longoria tallied 66 digs over three matches last week - highlighted by matching her career best with 30 at Western Illinois - to push her career total to 1,962 digs, just 38 shy of becoming the third player in Crusader volleyball history to reach 2,000 career digs. Longoria, who is averaging a career-best 4.91 digs/set this year, also ranks fifth nationally among active players in the category.

Campbell Looks For Another 1K: Having already reached the 1,000-kill mark last season as a junior, senior outside hitter Emily Campbell is poised to reach 1,000 in the digs category as well in the near future. Campbell enters the week with 980 career digs, 20 away from becoming just the eighth player all-time at Valpo to post at least 1,000 kills and 1,000 digs. Campbell started the match Saturday at Wright State - her first start since suffering an injury Sept. 9.

Dealing With Injuries: The Crusaders have been competitive in Horizon League play so far despite being ravaged by injuries. Campbell - out since Sept. 9 - has appeared in three of the last four matches, but has only started once. Junior outside hitter Allison Ketcham, who was playing at less than 100% earlier in the year, has not seen action since Sept. 17 and is not expected to play again this season. Sophomore middle Kayla Currier has not taken the court since Sept. 13, while senior outside hitter Jamie Lacheta and senior setter Tarrah Lasky have also both suffered recent injuries that have kept them out of action.

Carlson Posts Career High: Sophomore outside hitter Katherine Carlson has been counted upon to carry an offensive load with the Crusaders' injuries, and responded last week with 3.45 kills/set over Valpo's three matches - highlighted by a career-best 17 kills in the Crusaders' match at Wright State last time out. Carlson has reached double figures in kills 14 times this year, including six of Valpo's last seven matches, and has also posted at least 10 digs on eight occasions.