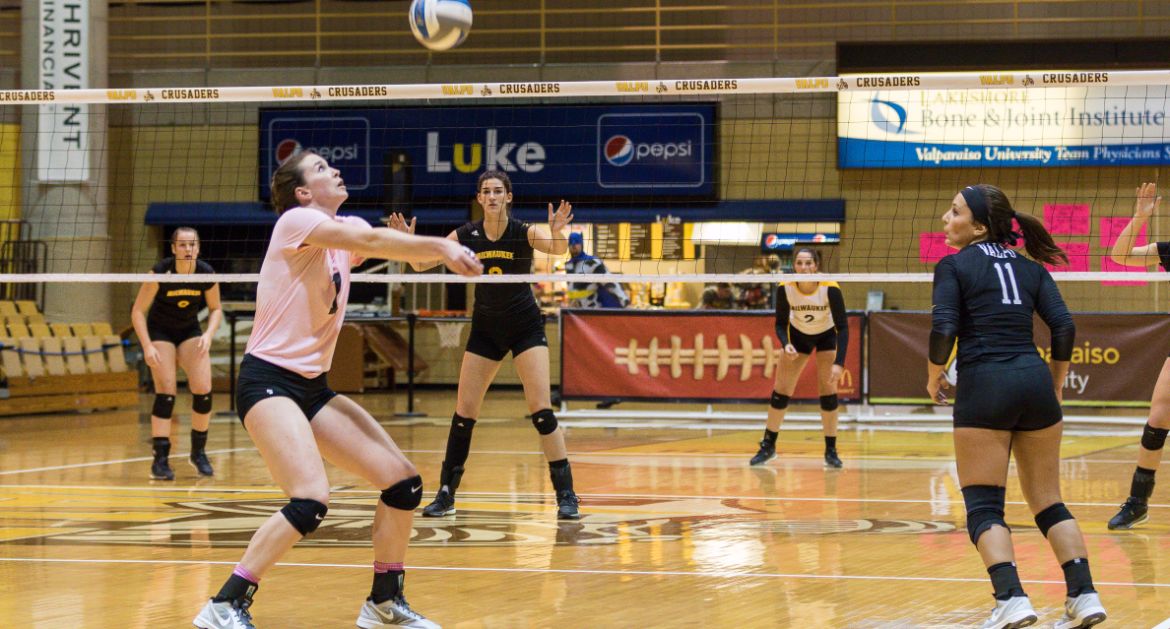 Again playing without a traditional setter due to injuries, the Valparaiso University volleyball team battled gamely with perennial Horizon League power Milwaukee Saturday evening at the ARC, as the Crusaders nearly set a program single-match record for blocks in a 3-1 (25-22, 25-20, 16-25, 25-22) loss to the Panthers. Along the way, seniors Morganne Longoria (Burlington, Wis./Burlington) and Emily Campbell (Grand Rapids, Mich./Forest Hills Central) both reached career milestones for their defensive work.

“With tonight being our second match playing in this system, we talked in practice about a lot of the things that we thought Milwaukee would try to do to counter it. Milwaukee did do many of those things, and I thought we did a good job staying in our unconventional system.”

“We spent a lot of time this week in practice working on our blocking, and it was nice to see us bring what we worked on this week into the match and execute so well. Unfortunately in the end tonight, I thought we needed some key sideouts at certain times, and we just couldn’t get them. We also ended up with a lot more unforced errors tonight than we had on Wednesday.”

“It’s a really special and remarkable accomplishment for Morganne to join our 2,000 dig club. She is a relentless defender for us, and I’m very proud of the way she’s playing right now. With all of our injuries, we’ve needed Morganne to step up and take on an even bigger role – she has done a phenomenal job being both a defender and a setter in these last couple matches. As a team, we’ve really needed some stability, and Morganne is giving that to us.”

“In this day and age, when a lot of teams are having hitters play just in the front row and then using a DS in the back row, it’s an awesome achievement to be a six-rotation outside hitter and play well enough both offensively and defensively to finish with over 1,000 kills and 1,000 digs. Emily has come a long way since her freshman year in the back row. She has worked extremely hard on her passing and defending over the last four years, to get to the point where she can be just as reliable in the back row for us as she is in the front row.”

The Crusaders (8-14, 2-6 Horizon) step out of league play on Tuesday for a 7 p.m. first serve at Chicago State. Live stats for the match will be available via ValpoAthletics.com.