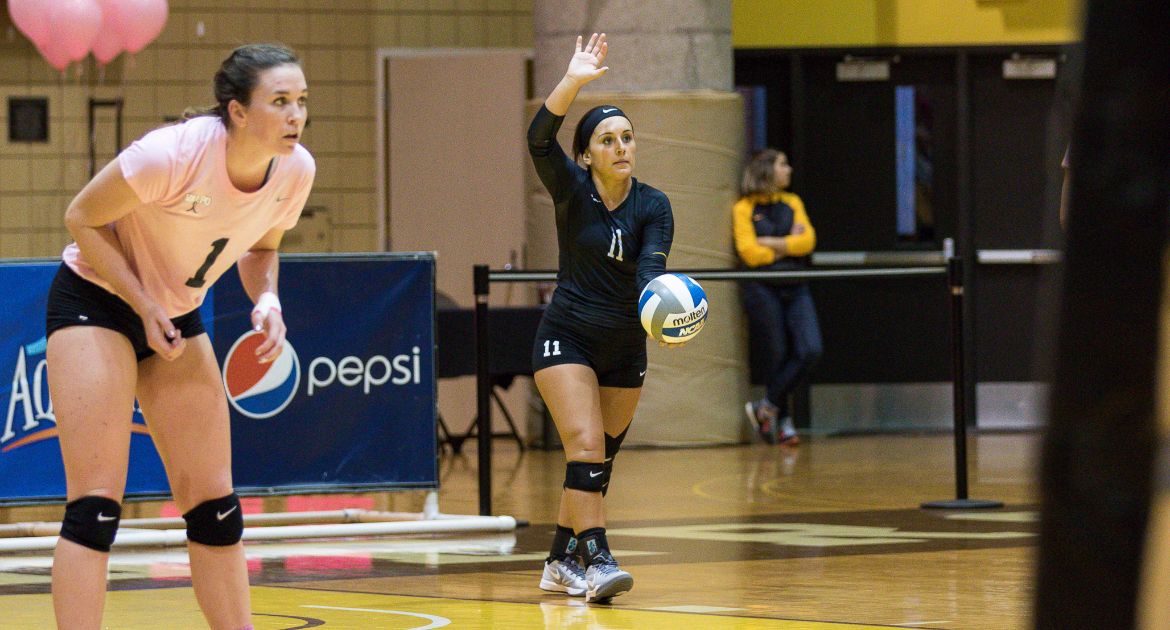 This Week in Crusader Volleyball: The Valparaiso University volleyball team heads into a key upcoming weekend of Horizon League action with a mid-week tuneup at Chicago State Tuesday evening. The Crusaders then host Wright State at the ARC Friday night and Northern Kentucky Saturday afternoon.

Looking Ahead: Another three-match slate is on the docket next week, all three of which will be on the road. The Crusaders will close out non-league action Tuesday, Oct. 25 at Fort Wayne before making the Horizon League swing through northeastern Ohio, playing at Cleveland State (Friday, Oct. 28) and Youngstown State (Saturday, Oct. 29).

Following the Crusaders: Saturday's match versus NKU will be streamed live on ESPN3, and also is accessible via WatchESPN and the ESPN app. Links for the live video, as well as live stats for all three matches, can be found at ValpoAthletics.com.

Head Coach Carin Avery: In her 15th season as head coach at Valparaiso, Carin Avery has won 348 matches (348-146) and has led Valpo to three league regular season and tournament titles, as well as three NCAA Tournament appearances. A two-time league Coach of the Year, Avery has coached 40 All-League recipients over her tenure as Crusader head coach. She is Valpo’s all-time leader in both victories and winning percentage, and owns 403 career victories overall as a head coach, reaching the 400-win milestone earlier this season with the Crusaders' win over South Dakota State.

Wright State - Valpo is 20-15 in program history against the Raiders, and had won 16 consecutive meetings with the Raiders before WSU rallied from two sets down a couple weeks back to earn a 3-2 win in Dayton.

Northern Kentucky - Valpo is just 1-3 all-time against the Norse, as NKU has claimed two of the three matchups since it joined the Horizon League last season, including a 3-0 win in Highland Heights this year.

Scouting the Opposition: Chicago State - The Cougars enter Tuesday night's match with a 3-18 overall record this year and are 1-6 in WAC play, most recently falling in straight sets at New Mexico State. Dzeni Hadzisehovic leads CSU with 2.68 kills/set, while Sofia Gruden has registered a team-best 59 blocks this season.

Wright State - The Raiders enter this week at 8-13 overall and 3-5 in Horizon League play, having dropped three straight matches in straight sets since beating the Crusaders on Oct. 8. Katie Klusman continues to lead WSU with 3.47 kills/set, while Jessie Thornton ranks among the league leaders with 4.82 digs/set.

Northern Kentucky - The Norse are perhaps the hottest team in the Horizon League, owning five straight sweeps to their credit to improve their record to 11-8 overall and 5-3 in Horizon League action. Keely Creamer has dominated offensively for NKU, posting 3.13 kills/set on .299 hitting.

Longoria Does It All...: Senior Morganne Longoria was called upon last week, with injuries to both of the Crusaders' setters, to do something seemingly unprecented since the adoption of the libero position in NCAA volleyball - fill the libero and setter roles simultaneously. In doing so, Longoria earned Horizon League Defensive Player of the Week honors, averaging 5.86 digs and 6.57 assists per set in the Crusaders' two matches - including a 3-0 sweep at then-league leading Oakland. Longoria tallied 28 assists in the win at Oakland as the Crusaders hit .237 in the win, more than tripling her previous career best of nine. She continued to be stellar as a primary passer as well, receiving 76 serves over the two matches without committing a reception error.

...And Reaches A Milestone: As if all her work passing and setting wasn't enough last week, Longoria also reached a big milestone. A bit past the midway point of the fourth set against Milwaukee, the senior registered her 24th dig of the match, giving her 2,000 career digs. Longoria joins past four-year Crusader liberos Taylor Root and Brittany Malicoat with over 2,000 digs for her career, and is among the top-five active players in the category as well. Longoria has saved the best for last, as she is averaging a career-high 4.99 digs/set this season.

More Milestones: Just two points after Longoria reached her milestone on Saturday, senior Emily Campbell proceeded to record a special mark as well. Campbell picked up her 1,000th career dig against the Panthers in the fourth set of that contest, after having already surpassed 1,000 career kills last season. The senior is one of just eight players in program history to record quadruple figures in both kills and digs for a career.

What a Win: The Crusaders' victory over Oakland on Wednesday was key as they downed the then-league leader on the road, but especially considering the adjusted attack strategy, it was one of the most remarkable wins in program history. With Longoria stepping in as the primary setter, Valpo hit above .200 in each of the three sets in the win over the Golden Grizzlies and ended the match hitting at a .237 clip - the team's fourth-best performance of the year.

Let's Have a Block Party: With the unconventional offensive attack, the need for the defense to step up has been amplified, and the Crusaders did that Saturday against Milwaukee - coming within a half-block of matching a program record for blocks in a match. Valpo tallied 20.5 blocks versus the Panthers, the fourth-best effort in program history, as it picked up at least four blocks in all four sets. The total was the program’s highest single-match block total in the 25-point era and was the highest block total since tallying 21 against UCLA in 2005. Individually, senior Rachel Bruinsma led the way with a new career high of nine rejections. Right behind her was senior Jamie Lacheta, who doubled her previous career best of four blocks as she finished the night with eight. Both sophomore Kayla Currier and Campbell finished just one off their respective career highs in blocks as well, posting six blocks apiece.

Returns to Action: Lacheta and Currier each came off the bench for their first action in some time Saturday against Milwaukee - Lacheta had not appeared since Sept. 30, while Currier took the court for the first time since Sept. 13. Campbell is finally back near 100% after suffering an ankle injury on Sept. 9 as well. Among those still sidelined are setters Tarrah Lasky and Lizzie Zaleski, while Allison Ketcham has undergone season-ending surgery and is expected to seek a medical redshirt.

The Rookie Chips In: As the lone freshman on this year's team, Alana Brown has seen limited action - mostly as a serving specialist - this season. But with the Crusaders' injuries, Brown got a chance to see more extended action Saturday against Milwaukee and recorded a pair of season highs - finishing the match against the Panthers with six digs and four assists.