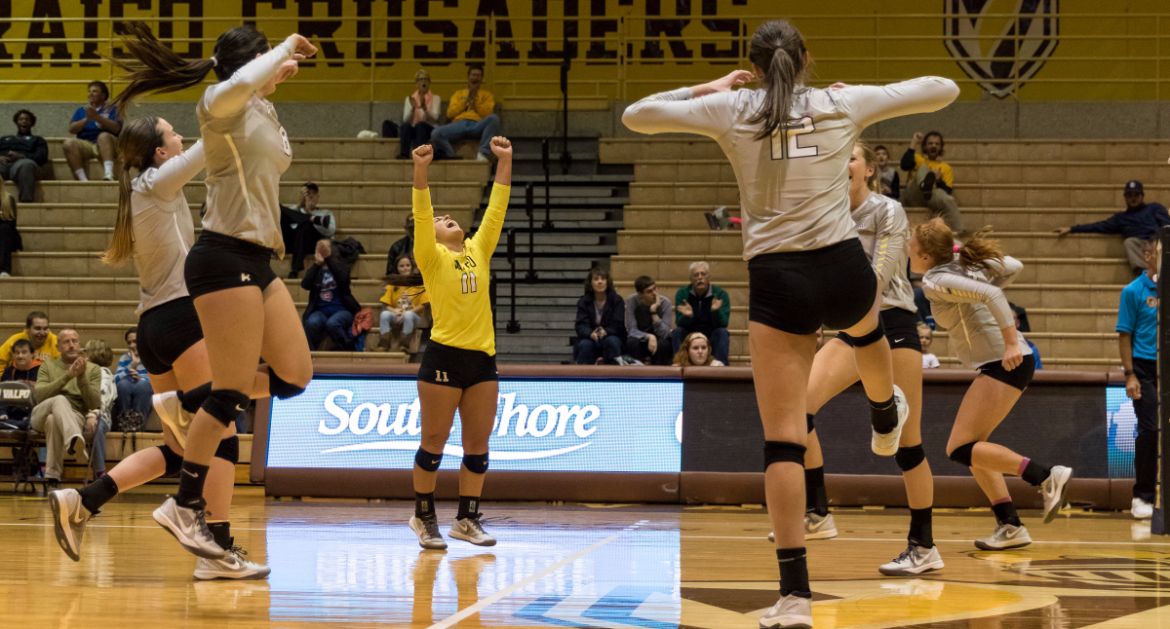 In a match featuring more total attacks and digs than any other this season in NCAA Division I volleyball, the Valparaiso University volleyball team came out on the right end of the defensive battle with Wright State in Horizon League play Friday evening at the ARC, downing the Raiders by a 3-2 (21-25, 25-22, 25-21, 23-25, 15-11) final. Sophomore Katherine Carlson (Lake Orion, Mich./Notre Dame Prep) finished with the first triple-double by a Crusader player since 2010, while senior Emily Campbell (Grand Rapids, Mich./Forest Hills Central) set a new program record for attacks in a single match.

“Tonight was obviously a very even match between two teams that share a lot of the same strengths. Both teams have been atop the league in digs all season long, so we knew coming in to tonight that it was probably going to be a defensive battle.”

“I thought our squad did a great job tonight, considering we used many different lineups. With all the injuries we’ve dealt with, we’ve been used to playing with one or two lineups throughout a match. This was really the first time since the third weekend of the season we had a number of substitutes available, and it was awesome to finally have some different options and different looks we could go with when players were struggling.”

“With all the injuries we’ve gone through, our healthy players have been asked to take on additional tasks to help carry the load. I think you saw that tonight with how many players stepped up to take the second ball and set the offense, up and down the roster, and especially with the jobs that Morganne, finishing with 26 assists, and  Katherine, finishing with a triple-double, did for us in that area.”

The Crusaders (11-14, 3-6 Horizon) face a quick turnaround, as they return to action Saturday afternoon at the ARC with a 4 p.m. first serve against Northern Kentucky. The match can be seen live on ESPN3, WatchESPN and the ESPN app, with links for the live video and live stats available via ValpoAthletics.com.