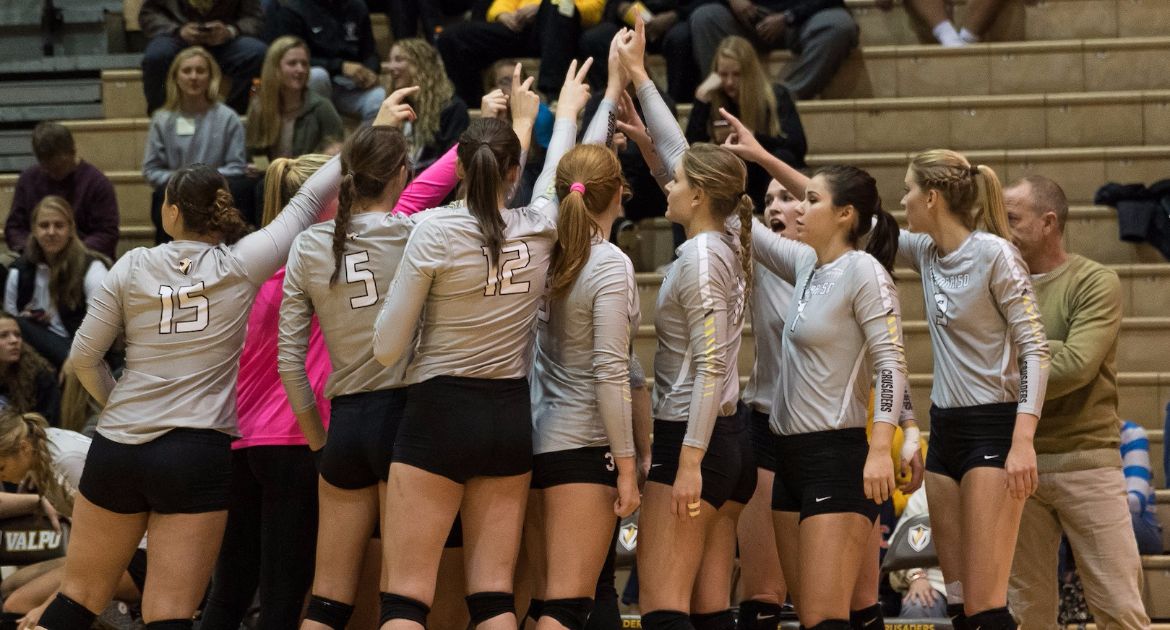 This Week in Crusader Volleyball: The Valparaiso University volleyball team finishes up the 2016 regular season this week with a pair of matches as the Crusaders fight to secure a spot in the Horizon League Championship. Valpo closes out its home slate Wednesday, hosting Oakland at 6 p.m., and then goes on the road Saturday afternoon to conclude the regular season at Milwaukee.

Looking Ahead: If the Crusaders earn a spot in the Horizon League Championship, the tournament will open up next Friday, Nov. 18 at Cleveland State.

Following the Crusaders: Both of this week's matches will be streamed live on ESPN3, and also are accessible via WatchESPN and the ESPN app. Links for the live video, as well as live stats, can be found at ValpoAthletics.com.

Head Coach Carin Avery: In her 15th season as head coach at Valparaiso, Carin Avery has won 353 matches (353-149) and has led Valpo to three league regular season and tournament titles, as well as three NCAA Tournament appearances. A two-time league Coach of the Year, Avery has coached 40 All-League recipients over her tenure as Crusader head coach. She is Valpo’s all-time leader in both victories and winning percentage, and owns 408 career victories overall as a head coach, reaching the 408-win milestone earlier this season with the Crusaders' win over South Dakota State.

Series Notes: Oakland - Valpo owns a 21-7 advantage in the all-time series with the Golden Grizzlies and the two squads have split eight matchups since Oakland joined the Horizon League prior to the 2013 season. Earlier this year, playing in their first match without a setter, the Crusaders swept the Golden Grizzlies in Rochester.

Milwaukee - The Panthers lead the all-time series with Valpo 25-18, including an 18-8 edge since the Crusaders joined the Horizon League. Valpo took two of three from UWM last season, but in their first meeting this year, the Panthers claimed a four-set win at the ARC.

Scouting the Opposition: Oakland - The Golden Grizzlies enter Wednesday night's match at 18-10 overall and tied for second place in the league standings at 10-4. Melissa Deatsch leads the OU offense with 2.98 kills/set, while Sammy Condon adds 2.34 kills/set on a team-best .278 hitting percentage. Krysteena Davis paces the Golden Grizzlies at the net with 1.12 blocks/set.

Milwaukee - The Panthers enter the week at 13-12 overall and 7-7 in Horizon League action, with a matchup against Oakland on Friday before the Crusaders visit on Saturday. Caitlin Schultz averages a team-high 3.09 kills/set, while in the back row, Myanna Ruiz is posting 4.27 digs/set.

A Look at the Standings: Valpo enters this week in a three-way fight for the sixth seed in the Horizon League Championship field. The Crusaders are currently one game up on both Wright State and UIC for sixth position, and own the tiebreaker over UIC in a two-way tie and the tiebreaker if it ends in a three-way tie. A two-way tiebreaker with Wright State would depend on who the Raiders beat this week, as Valpo and WSU split their season series. One win this week would assure the Crusaders a berth in the tournament, unless Wright State won both of its matches and UIC lost at least one of its two.

One Time Through the Order: With the Crusaders' match against Green Bay on Saturday, the team has now played one entire rotation through the league schedule with their modified offensive attack. Valpo split those eight matches, going 4-4 after starting the stretch at just 1-5 in league play. Over the last ten matches (including a pair of non-league victories), the Crusaders have 47 fewer kills than their opponents but have also committed 65 fewer attack errors, leading to Valpo out-hitting its opposition, .188-.172.

Longoria Continues To Fill Dual Role: Senior Morganne Longoria continued to act as both libero and primary setter last week for the fourth straight week for the Crusaders, helping Valpo to split a pair of league matches. Over the last four weeks, Longoria has averaged 5.68 assists and 5.46 digs per set while helping lead the Crusaders to a 6-4 record. Over that span, she has set new career highs for both digs (36) and assists (28) in a single match, and has twice been named Horizon League Defensive Player of the Week. On the season, Longoria ranks 26th nationally and leads the Horizon League with 5.09 digs/set.

Graboski Matches Career Best: With Valpo's injuries this year, junior Taylor Graboski has moved from the middle to a pin hitter and has enjoyed her most prolific offensive season, recording 329 kills to date this year. Saturday versus Green Bay, Graboski tied the highest output of her career in the kills category, finishing with a match-high 24 kills on a career-high 62 swings. The junior had previously posted 24 kills in a five-set win earlier this year at UIC - this after entering the season with a personal best of 15 kills, a mark she has matched or surpassed six times this season.

Carlson With Another Triple Double: Katherine Carlson has taken on a larger role taking second touches in the Crusader offense over the last month, giving her chances to rack up assists, and thanks to that, she has posted two triple-doubles in the last seven matches. Carlson set career bests with 22 kills and 28 digs in the home win over Wright State while also tallying 10 assists, and then last time out against Green Bay, she set a new career high with 11 assists and also posted 13 kills and 10 digs - making her one of just two non-setters in the country with multiple triple-doubles this season.

A Record-Setting Contest: The Crusaders' five-set victory over Wright State at the ARC was something unprecented in D-I volleyball this year. As a team, the Crusaders totaled 270 attacks, the most by any Division I team in a single match in at least the last three years. The 270 swings were easily a program high in the rally-scoring era and also marked the second-most in a single match in program history, with the record being set way back in 1990. Valpo finished the victory with 129 digs as a team, the second-most by a D-I team this season – only trailing Wright State’s Friday total of 143 digs. For the Crusaders, the total was the fifth-highest dig mark in a single match in program history – setting a new rally scoring high – and was the highest total since 1994.

Look at the Individual Record Book: Campbell took 79 swings in the win over the Raiders, setting a new Valpo single-match record, which she had shared previously with Kathy Harrison at 77. For her career, Campbell has registered 4,130 total attacks - second-most in program history - while she currently owns 1,378 career kills, good for fifth position and just 26 shy of fourth place. Meanwhile, Longoria ranks third in program history with 2,164 career digs and has picked up 595 of those this season - eighth-most in a single season in program history, and just seven out of the seventh spot and 26 digs shy of sixth.

Milestone Saturday: Valpo's match against Milwaukee Oct. 15 featured a pair of milestones reached in a three-point span. A bit past the midway point of the fourth set, Longoria registered her 24th dig of the match, giving her 2,000 career digs. Longoria joined past four-year Crusader liberos Taylor Root and Brittany Malicoat with over 2,000 digs for her career, and ranks among the top-five active players in the category as well. Then, just two points after Longoria reached her milestone, Campbell proceeded to record a special mark as well. Campbell picked up her 1,000th career dig against the Panthers in the fourth set of that contest, after having already surpassed 1,000 career kills last season. The senior is one of just eight players in program history to record quadruple figures in both kills and digs for a career.

Let's Have a Block Party: With the unconventional offensive attack, the need for the defense to step up has been amplified, and the Crusaders did that in the match against Milwaukee - coming within a half-block of matching a program record for blocks in a match. Valpo tallied 20.5 blocks versus the Panthers, the fourth-best effort in program history, as it picked up at least four blocks in all four sets. The total was the program’s highest single-match block total in the 25-point era and was the highest block total since tallying 21 against UCLA in 2005. Individually, senior Rachel Bruinsma led the way with a new career high of nine rejections. Right behind her was senior Jamie Lacheta, who doubled her previous career best of four blocks as she finished the night with eight. Both sophomore Kayla Currier and Campbell finished just one off their respective career highs in blocks as well, posting six blocks apiece.

Returns to Action: Valpo's lengthy injury report has finally been pared down in recent weeks. Campbell returned Sept. 30 after missing three weeks with an ankle injury, while Lacheta and Currier each came off the bench for their first action in some time against Milwaukee Oct. 15 - Lacheta had not appeared since Sept. 30, while Currier took the court for the first time since Sept. 13. Tarrah Lasky returned at Chicago State after missing two and a half weeks, but has only seen off-and-on action since as she still is not 100%. Among those still sidelined are Lizzie Zaleski and Allison Ketcham - the latter has undergone season-ending surgery and is expected to seek a medical redshirt.

20 Wins, Year After Year: The Valpo volleyball program finds itself among a prestigious group of programs nationwide, as last year’s 27-win campaign was the 14th straight season the Crusaders captured at least 20 victories – all under head coach Carin Avery. Only nine Division I volleyball programs have won at least 20 matches in each of the last 14 years, a group which includes Colorado State, Florida, Hawai'i, Nebraska, Ohio, Penn State, Stanford and Western Kentucky.