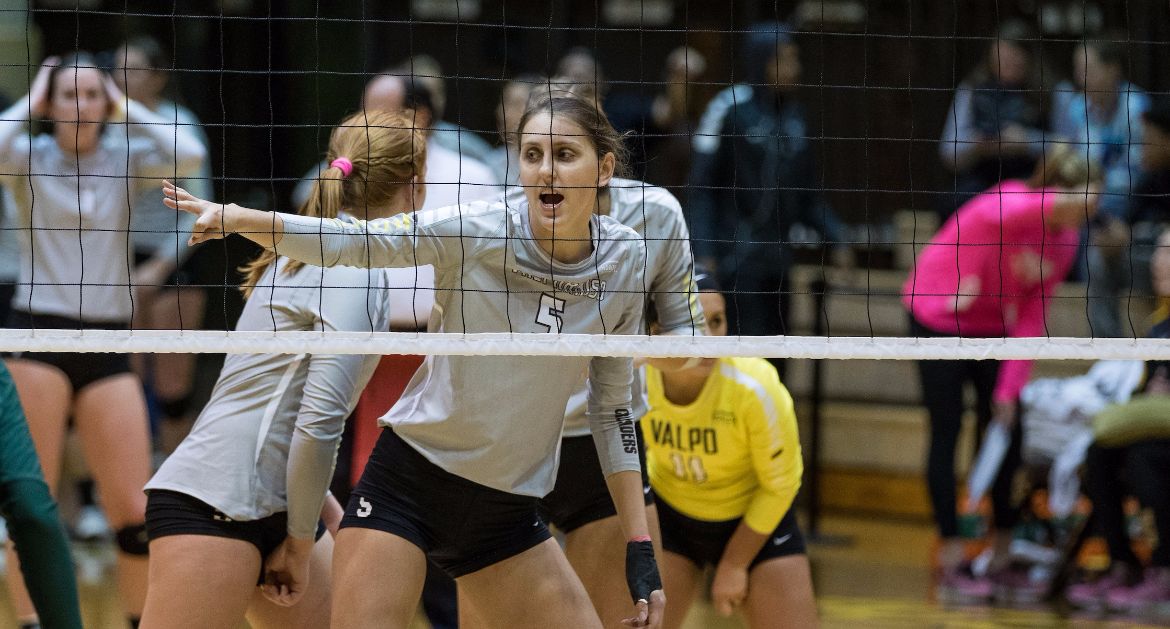 This Week in Crusader Volleyball: The Valparaiso University volleyball team kicks off the 2017 season this weekend with its first of four early-season tournaments, making the short trip east on the Indiana Toll Road to Notre Dame for the Golden Dome Invitational. Valpo will face the host Fighting Irish on Friday evening at 6 p.m. CT before taking on New Mexico State and Rhode Island on Saturday at 9 a.m. and 3 p.m., respectively.

Looking Ahead: The second weekend of play sees Valpo head north to Brookings, S.D.. to take part in the Jackrabbits Invitational, hosted by South Dakota State. The Crusaders take on Cal State Bakersfield and Northern Arizona in Brookings in addition to the hosts.

Following the Crusaders: All three matches this weekend will have live stats available through ValpoAthletics.com. In addition, the match versus Notre Dame will be streamed on ACC Network Extra/WatchESPN as well.

Head Coach Carin Avery: In her 16th season as head coach at Valparaiso, Carin Avery has won 354 matches (354-151, .701) at the helm of the Crusaders and has led Valpo to three league regular season and tournament titles, as well as three NCAA Tournament appearances. A two-time league Coach of the Year, Avery has coached 49 All-League recipients over her tenure as Crusader head coach. She is Valpo’s all-time leader in both victories and winning percentage, and owns 409 career victories overall as a head coach.

Series Notes: Valpo is 5-21 all-time against Notre Dame, most recently taking on the Fighting Irish in 2011 - a 3-0 win for Notre Dame. Valpo's last win in the series came in the opening weekend of the 2008 season, when the Crusaders took down the Irish, 3-1.

The Crusaders fell to New Mexico State last season on Sept. 2, 3-0, in the only matchup in the all-time series. Valpo and Rhode Island have met just once on the volleyball court in program history as well, a 3-0 Crusader victory in September of 2013 at the ARC.

Looking to Start a New Streak: After winning at least 20 matches in a 14-year stretch from 2002 through 2015, the Crusaders ended last season with just 15 victories as they struggled with injuries all season long. Valpo was one of just nine programs in the nation to win 20 or more contests in each of those 14 seasons - a group which included Colorado State, Florida, Hawai'i, Nebraska, Ohio, Penn State, Stanford and Western Kentucky.

Returning Award Winners: While Valpo's lone two award winners from last year's squad - Longoria and Campbell - both graduated following the 2016-17 school year, the Crusaders have plenty of players back who have earned recognition at the league level. Redshirt junior Allison Ketcham - an All-Horizon League selection in 2015 - returns after being limited to just 28 sets last season due to injury. Ketcham is also one of four current Crusaders (Graboski, Carlson, Currier) who were named to the Horizon League All-Newcomer Team in their respective rookie seasons at Valpo.