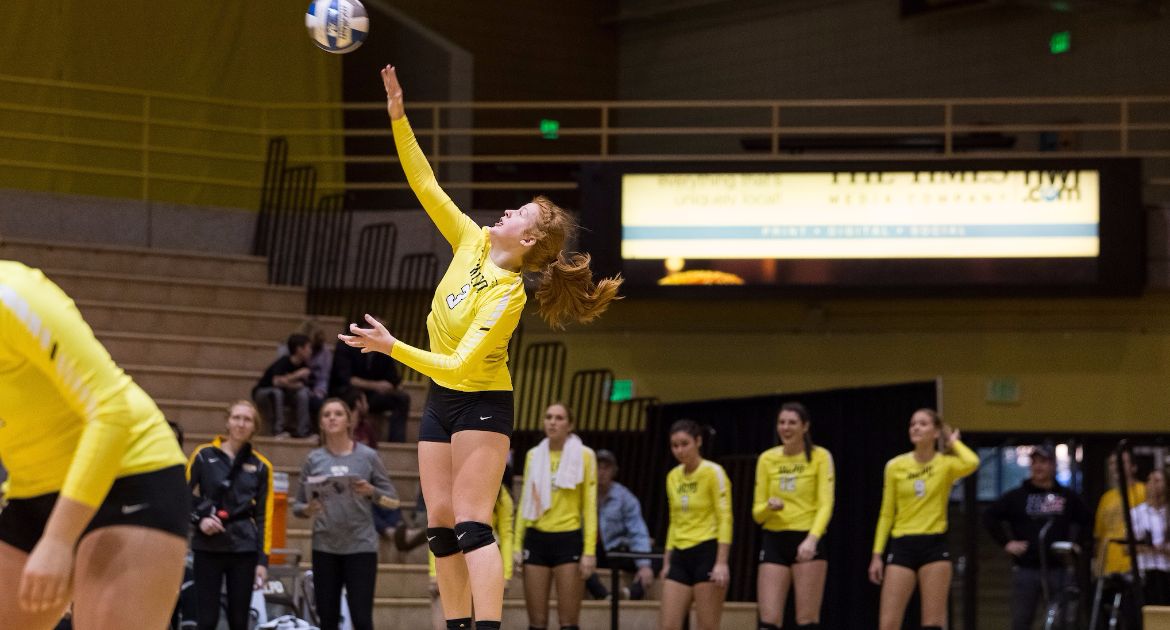 This Week in Crusader Volleyball: The Valparaiso University volleyball team heads north for the second of four early-season tournaments this weekend, traveling to Brookings, S.D. for the Jackrabbits Invitational. The Crusaders will face off with Cal State Bakersfield and Northern Arizona on Friday before taking on the hosts from South Dakota State on Saturday.

Previously: Valpo went 1-2 on the opening weekend of play at Notre Dame's Golden Dome Invitational, taking a set in losses to Notre Dame and New Mexico State before closing the weekend with a three-set sweep of Rhode Island. Rylee Cookerly and Brittany Anderson represented the Crusaders on the All-Tournament Team.

Looking Ahead: Valpo will travel to the Empire State next weekend, journeying to Ithaca, N.Y. for the Cornell Invitational. Matchups with St. John's and Binghamton await the Crusaders there, as well as their match with the host Big Red.

Head Coach Carin Avery: In her 16th season as head coach at Valparaiso, Carin Avery has won 355 matches (355-153, .699) at the helm of the Crusaders and has led Valpo to three league regular season and tournament titles, as well as three NCAA Tournament appearances. A two-time league Coach of the Year, Avery has coached 49 All-League recipients over her tenure as Crusader head coach. She is Valpo’s all-time leader in both victories and winning percentage, and owns 410 career victories overall as a head coach.

Series Notes: Cal State Bakersfield - For schools located 2,000 miles apart, it's unusual that they would play in back-to-back seasons, but that's the case for the Crusaders and the Roadrunners. The two squads met for the first time last season, opening the 2016 campaign in a matchup at Army West Point. Valpo came away with a 3-1 win in that meeting, posting 14 team blocks - including seven apiece from Taylor Graboski and Kayla Currier.

South Dakota State - This year marks the sixth time in a 12-season span Valpo and SDSU have met on the volleyball court. The Crusaders currently hold a slight 3-2 edge in the series, including an easy three-set sweep of the Jackrabbits last season as part of the Popcorn Classic. Last season's victory marked the 400th win in Carin Avery's head coaching career.

Scouting the Opposition: Cal State Bakersfield - The Roadrunners went 1-2 on the opening weekend of action, falling to Arkansas and Utah State before defeating Louisiana-Monroe. Last season, CSUB posted 14 victories, including a second-place finish in the WAC at 10-4.

Northern Arizona - The Lumberjacks also posted a 1-2 record in the first weekend of play, with a five-set win over Southern Illinois and losses to Western Kentucky and Miami (Ohio). NAU finished 24-8 overall last season and registered a 12-4 record in the Big Sky.

Debuting With a Bang: Freshman Rylee Cookerly earned the start at libero in her first collegiate match as Valpo faced Notre Dame, and needed just the one match to make an impact on the Crusader record book. Cookerly tallied an astounding 43 digs in the four-set match, setting a new program single-match record - breaking the previous mark of 40, which had been set by Karen Kulick in 1991 and had stood for nearly 26 years. Cookerly's 43 digs was the highest single-match total in Division I in the opening weekend of action, and was the sixth-highest mark in a match in MVC history.

Rookies Earning Honors: Sparked by her record-setting performance versus the Irish, Cookerly averaged 6.64 digs/set for the weekend and was one of two Crusader freshmen to earn All-Tournament Team accolades. She was joined by rookie setter Brittany Anderson, who averaged 8.00 assists and 2.82 digs/set over the trio of matches. It is the first known time in program history that two Valpo freshmen have both earned All-Tournament Team honors following their first career tournament. Ironically, the last two Crusader freshmen to receive All-Tournament accolades in their debut tournament were Valpo's last two liberos - Morganne Longoria in 2013 at UCF, and Taylor Root in 2009 at Florida.

Early Action For the Rookies: Nearly half of this year's Crusader squad are true freshmen, and all six saw action on opening weekend for Valpo. Anderson, Cookerly (at libero) and Ally Cummings all earned starts in the season opener against Notre Dame.

Returning to The Court: Redshirt junior Allison Ketcham appeared in just eight matches last year for Valpo before being shut down due to injury. An All-League honoree in 2015, Ketcham returned to the lineup this weekend for the Crusaders and picked right up where she left off with her play in the back row, tallying 18 digs versus Notre Dame and 16 against New Mexico State before recording a match-high 23 digs in the sweep of Rhode Island. Ketcham is poised to reach a milestone this weekend, as she closed opening weekend with 993 career digs.

Strong Play at the Net: The Crusaders' defense at the net stood up to the test on the opening weekend of play, as Valpo tallied 2.64 blocks/set and limited its three opponents to a combined .160 hitting percentage. Senior Taylor Graboski led the way for Valpo with 14 blocks, including a match-high seven rejections against New Mexico State - tying the second-best effort of her career. Meanwhile, junior Sydney Bronner totaled 13 blocks and set a new career high in the sweep of Rhode Island with eight rejections.

Looking to Start a New Streak: After winning at least 20 matches in a 14-year stretch from 2002 through 2015, the Crusaders ended last season with just 15 victories as they struggled with injuries all season long. Valpo was one of just nine programs in the nation to win 20 or more contests in each of those 14 seasons - a group which included Colorado State, Florida, Hawai'i, Nebraska, Ohio, Penn State, Stanford and Western Kentucky.