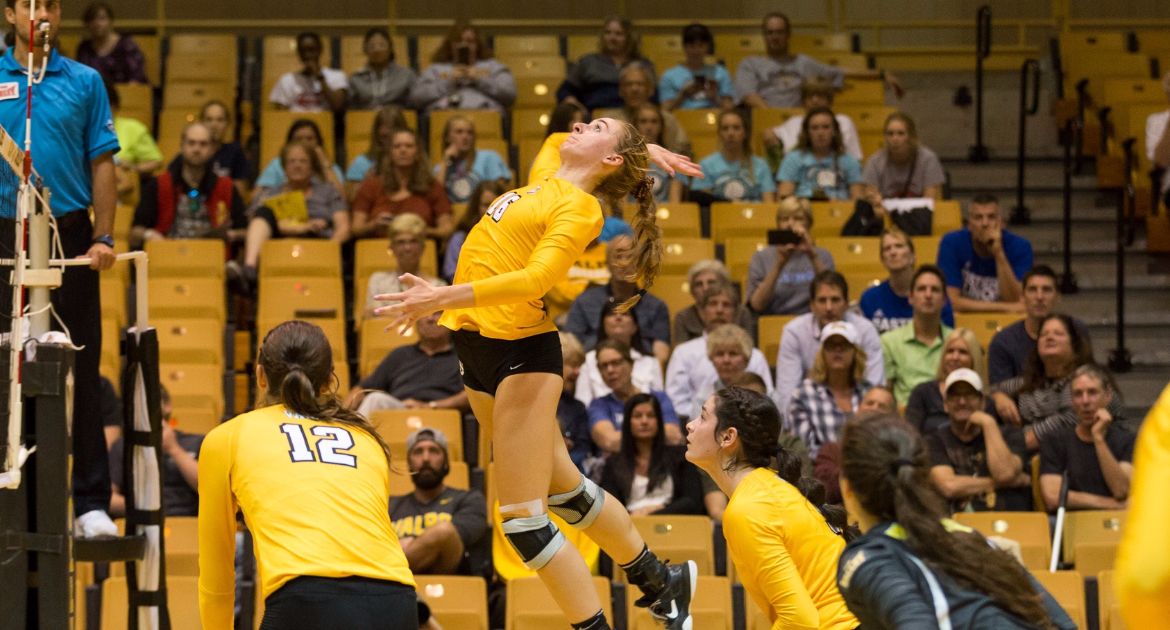 In front of a great crowd at the ARC in its home opener on Tuesday night, the Valparaiso University volleyball team put together a strong all-around performance in a 3-1 (25-13, 25-17, 18-25, 25-14) victory in non-conference action over Eastern Illinois. Redshirt junior Allison Ketcham (Mishawaka, Ind./Marian) set a new career best in the win with 29 digs, while freshman Ally Cummings (Novi, Mich./Novi) led the way offensively with a season-high 15 kills on .394 hitting.

- Valpo looked to lead start to finish in the second set as well, scoring the first four points and pulling ahead by six at 14-8 just past the midway point of the frame. The Panthers closed to within 16-14, forcing a Crusader timeout, and out of the stoppage Valpo scored five consecutive points to take command and eventually earn a 2-0 lead at the in-game break.

- EIU turned the tables on the Crusaders in set three, holding Valpo to just .160 hitting for the set. The Crusaders led early and were up 10-7 approaching the midway point, but the Panthers went on an 11-2 run to take control and force a fourth set.

- Valpo’s defense rose to the occasions in the fourth set to close out the match, limiting EIU to just six kills on .036 hitting. A six-point run on the serve of freshman Rylee Cookerly (Brownsburg, Ind./Brownsburg), which included a pair of service aces, extended a 12-8 lead to 18-8 and slammed the door on the match.

- The Crusaders put together one of their top offensive performances of the season, setting a new season high with 60 kills while swinging at a .241 clip – their second-best hitting percentage of the year.

- Meanwhile, Valpo’s defense limited EIU to just 42 kills on .113 hitting. The Crusaders also enjoyed a 93-77 advantage in the digs column and out-blocked the Panthers, 10-6.

- Cummings paced the Crusader offense with a new career high, recording 15 kills on .394 hitting as she committed just two attack errors. Defensively, she added 10 digs for her second consecutive double-double.

- Ketcham posted a match-best 29 digs to lead the back-row defense, which continues to lead the nation in digs per set. The redshirt junior bested her previous career high of 27, set in 2015 at Cleveland State while she was playing libero.

- Cookerly finished the night with 22 digs, while Carlson posted 12 digs as well for a double-double.

- Freshman Brittany Anderson (East Chicago, Ind./Bishop Noll) rounded out a trio of Crusaders with double-doubles on Wednesday, dishing out 47 assists while also tallying 11 digs for her seventh double-double of the year. Anderson also recorded three blocks, including two solo rejections.

- Valpo had a strong night when it came to one-on-one blocking situations, racking up seven total solo blocks among its 10 team blocks. The seven solo rejections marked the most by a Crusader squad since Sept. 10, 2005, when Valpo tallied eight solo blocks against Eastern Michigan.

“We were excited to get back to the ARC tonight and get to play in front of our home crowd. It was a tremendous crowd and a great atmosphere – just a great welcome home after a few weeks playing on the road.”

“We’ve been good defensively all season long so far, leading the nation in digs and blocking pretty well also. Tonight, I felt like we did a much better job than we have so far of executing off our digs. Brittany did a very good job mixing the ball around, and our outsides did much better in getting first-ball kills.”

“Since the start of preseason, we’ve really tried to work on our sideout percentage. It’s been a little low the first few weeks, and our big goal is to be siding out at 70%. Other than the third set tonight, we were able to hit that mark.”

Valpo (5-5) heads to the Buffalo Wild Wings Invitational in Macomb, Ill. on Friday afternoon, where a pair of matches awaits the Crusaders. They will face host Western Illinois at noon before turning around for a 4 p.m. matchup with McNeese State. Live stats for both matches will be available via ValpoAthletics.com.