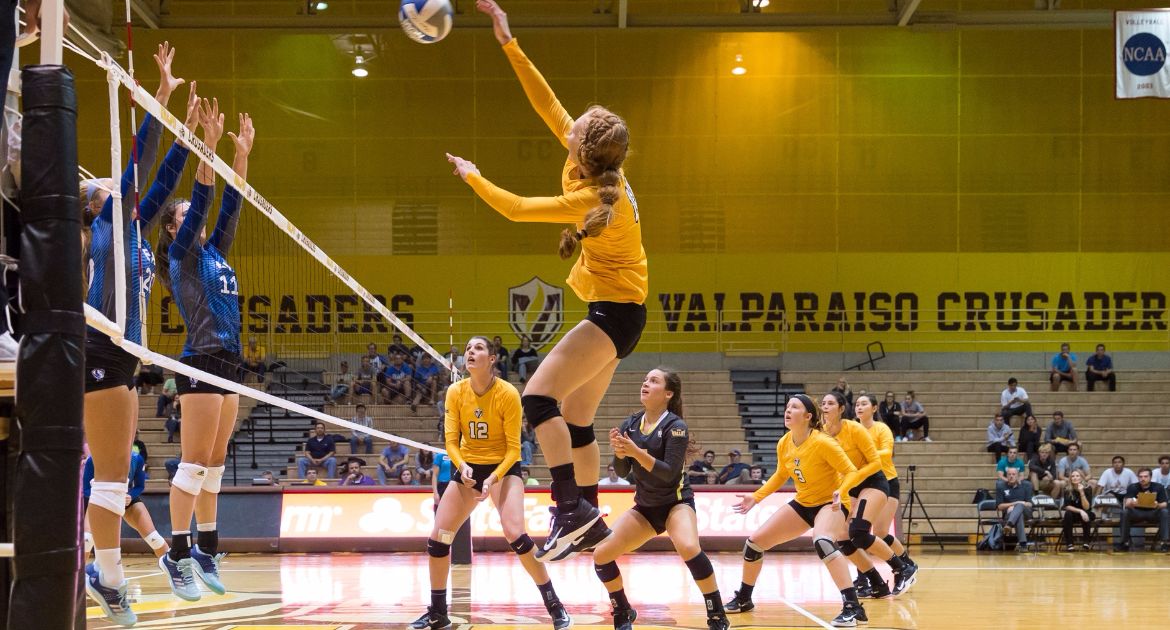 This Week in Crusader Volleyball: Friday night will be a special night at the ARC, as Valparaiso University hosts its first Missouri Valley Conference event in any sport when nationally-ranked UNI visits to take on the Crusader volleyball team to open conference play. Valpo will then play host to Drake Saturday night before hitting the road for a Monday night conference match at Southern Illinois.

Previously: The Crusaders extended their winning streak to five consecutive matches last week with a trio of victories. Valpo opened its home slate with a 3-1 win over Eastern Illinois, and then went on to claim the tournament title at Western Illinois' Buffalo Wild Wings Invitational with a sweep of the host Leathernecks and a 3-1 win over McNeese.

Looking Ahead: After playing three matches in a four-day span, Valpo will face just one Valley match in the next 11 days, continuing a four-match stretch away from home Sunday, Oct. 1 at Loyola.

Following the Crusaders: All three matches to open MVC play will have live stats available through ValpoAthletics.com. Monday's match at Southern Illinois will be broadcast live on The Valley On ESPN3, on WatchESPN and the ESPN app. In addition, the Crusaders' pair of home matches will be broadcast live on WVUR (95.1 FM, Valparaiso), with the link to those audio broadcasts available on ValpoAthletics.com as well.

Head Coach Carin Avery: In her 16th season as head coach at Valparaiso, Carin Avery has won 358 matches (361-156, .698) at the helm of the Crusaders and has led Valpo to three league regular season and tournament titles, as well as three NCAA Tournament appearances. A two-time league Coach of the Year, Avery has coached 49 All-League recipients over her tenure as Crusader head coach. She is Valpo’s all-time leader in both victories and winning percentage, and owns 416 career victories overall as a head coach.

Series Notes: UNI - The Crusaders and Panthers have not matched up for over two decades in a series which UNI leads 6-0. The last meeting came in an NCAA Tournament play-in match in November of 1995 after Valpo had claimed the Mid-Con Tournament title. UNI won that matchup in Cedar Falls, 3-0.

Drake - Valpo holds a 4-2 edge all-time versus the Bulldogs, including a 3-0 sweep in the most recent meeting in September of 2014 at UT Martin. Current Crusaders Taylor Graboski and Allison Ketcham were both strong in the win, as Graboski hit .300 with five kills and Ketcham posted six kills on .462 hitting along with seven digs.

Southern Illinois - Valpo and SIU have met just three times on the volleyball court over the years, with the Salukis taking all three matchups. The most recent contest came in September of 2012 at Saint Louis, a 3-0 SIU victory.

Scouting the Opposition: UNI - The Panthers cracked the AVCA top-25 this week for the first time in five years, as they will carry a #22 national ranking into the ARC Friday night. UNI enters MVC play at 10-4 on the year and owns four victories over top-25 opponents in non-conference action this season. Sophomore Karlie Taylor leads UNI with 3.89 kills/set, good for third in the conference, while junior Piper Thomas ranks among the top-10 in the conference in kills (3.54/set, 5th), hitting percentage (.300, 7th) and blocks (0.98/set, 6th). Senior Heather Hook averages a conference-best 11.04 assists/set as well.

Drake - The Bulldogs carry the MVC's best winning percentage into conference play, as they currently sit at 10-3 with a Friday night match at Loyola before visiting the ARC Saturday. Most recently, Drake also won a pair of matches at WIU, sweeping the Leathernecks while taking five sets to beat McNeese. Senior Kyla Inderski leads the Bulldogs with 3.19 kills/set and freshman Natalie Fry hits at a .370 clip, good for third in the conference.

Southern Illinois - The Salukis enter conference play at 1-10, with matches at Bradley and Illinois State this weekend before returning to Carbondale to host the Crusaders. Senior middle Kolby Meeks is hitting a conference-best .403 on the season and ranks 34th nationally in the category.

The First MVC Home Match: Just as in 2007 when the Crusaders hosted UIC at the ARC in Valpo's first home Horizon League contest in any sport, the volleyball program gets the honor of being the first Crusader team to host an MVC home contest on Friday evening. Valpo fans will hope Friday night's affair goes like the league home opener a decade ago went, as the Crusaders rallied for a five-set win over UIC that night which featured a record-setting offensive performance from Nicole Schulz.

Taking On Ranked Foes: Valpo's contest against UNI marks the first time a nationally-ranked opponent has visited the ARC since Sept. 1, 1998, when the Crusaders hosted #16 Notre Dame for both squads' season opener. Ohio State has provided Valpo its last three meetings with nationally-ranked teams, including most recently last season at Ball State.

Digging Deep: For the third consecutive week, Valpo leads the nation in digs per set, and this week it comes by a wide margin. The Crusaders are averaging 21.33 digs/set over their first 12 matches, far out-pacing Notre Dame, which ranks second nationally with 19.57 digs/set. Valpo has a long tradition of strong defensive play, as the program has ranked among the top-20 nationally in digs/set in each of the last seven seasons - including a sixth-place placement in 2015 and a fourth-place finish in 2010.

Keeping Rallies Alive: The Crusaders took their dig totals to another level in their three wins last week. Valpo entered the week averaging 20.34 digs/set, but racked up a massive 24.18 digs/set over the three victories. The week was highlighted by a 110-dig effort in the four-set victory over McNeese – matching the most in a four-set match since the move to 25-point sets and tied for the second-most in a four-set match of any length since 1998.

Bronner's The Real MVP: One week after being named to the All-Tournament Team at Cornell, junior middle Sydney Bronner was named Tournament MVP at Western Illinois’ Buffalo Wild Wings Invitational as she helped lead Valpo to the tournament title. Bronner averaged 3.71 kills/set on .296 hitting and tallied six blocks in the Crusaders’ wins over Western Illinois and McNeese to claim the tournament title. The junior especially stood out in the win over McNeese, racking up a career-best 18 kills – six more than her previous career high, set just last weekend. Bronner - who currently leads the MVC with 1.17 blocks/set and also ranks 10th in hitting percentage - is the first Crusader to earn Tournament MVP honors since Kelsey Berrington was named MVP at St. Francis Brooklyn in early September of 2015.

Anderson Stands Out: Freshman setter Brittany Anderson was named the MVC Freshman of the Week after earning All-Tournament Team accolades at Western Illinois last weekend. She opened the week with 47 assists, 11 digs and three blocks in a home win over Eastern Illinois. Anderson delivered 31 assists and nine digs to narrowly miss a double-double in a sweep of Western Illinois, and then closed the Buffalo Wild Wings Invitational with season-high totals of 57 assists and 19 digs in a four-set victory over McNeese. For the week, Anderson averaged 12.27 assists and 3.55 digs per set and also chipped in eight kills on .320 hitting. Through four weekends of play this year, Anderson is averaging 10.49 assists and 3.16 digs per set, and has totaled 451 assists - already the second-most by a Valpo freshman setter in Avery's time as head coach (Kelsey Berrington, 2012, 783 assists).

Graboski Picks Up Honor: Death, taxes and senior middle Taylor Graboski earning an All-Tournament Team accolade in early-season action. This year, it occured at Western Illinois, as Graboski hit .294 with 3.43 kills/set and tallied a team-high seven blocks in the Crusaders' pair of victories. The senior dominated in the win over McNeese with five rejections – including a pair of solo blocks – and a season-best 17 kills on .464 hitting. Graboski now owns five career All-Tournament Team mentions and was named to at least one All-Tournament Team in each of her four years. Graboski enters the weekend with 966 career kills, just 34 kills shy of becoming the 15th player in program history to reach the 1,000-kill milestone.

Cookerly Continues to Shine: Freshman Rylee Cookerly continues to rank among the nation's best in the back row, as she enters this week averaging 6.26 digs/set - good for third nationally. Cookerly, who set Valpo's program record for digs in a match in her debut at Notre Dame and who was tabbed the MVC Freshman of the Week following the second weekend of action, owns 269 digs through 12 matches, which well out-paces the Crusaders' last three four-year liberos at the same point early in their careers (Longoria - 192; Root - 196; Malicoat - 22).

Freshmen Post Big Performances: A pair of Valpo’s freshmen came up with standout performances in victories last week for the Crusaders. In Wednesday evening’s home win over Eastern Illinois, Ally Cummings tallied a season-best 15 kills on .394 hitting. Then, in the sweep of Western Illinois, Peyton McCarthy stepped up off the bench. McCarthy entered the match with just six career kills, but matched that total in the win over the Leathernecks on just 11 swings, hitting at a .545 clip.

Defending the Home Court: Valpo opened its home slate at the ARC last week with a four-set win over Eastern Illinois and looks to defend its home court in its initial foray into Valley action. Since the start of the 2007 season, Valpo owns a 65-25 (.722) record at home at the ARC.