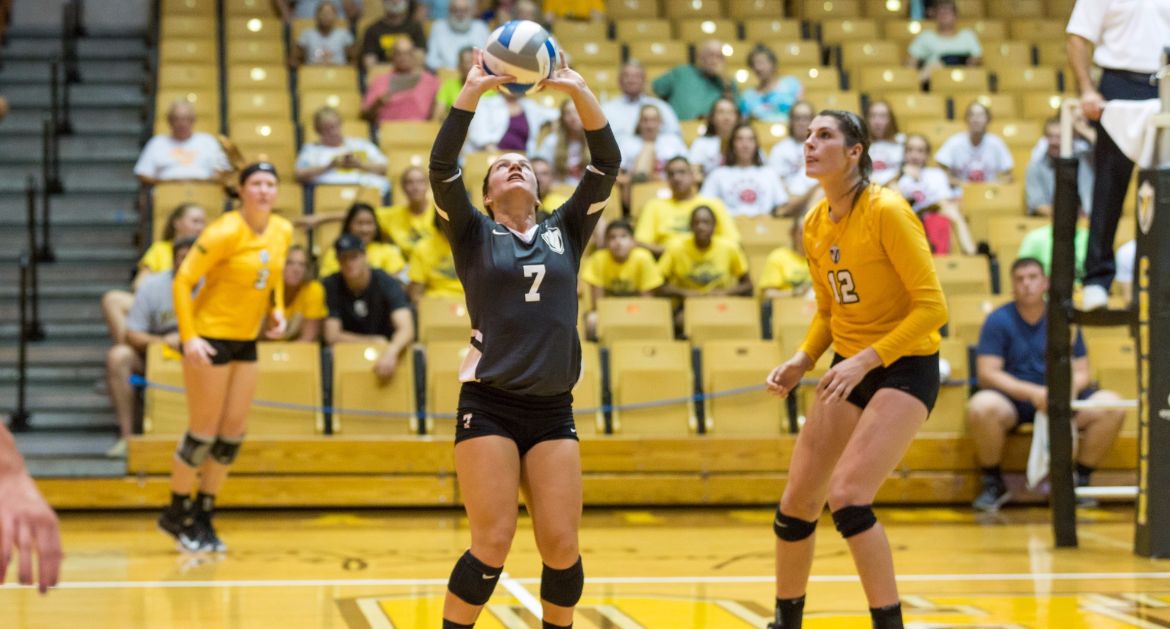 The Valparaiso University volleyball team welcomed #22 UNI to the ARC in the Crusaders’ first-ever home Missouri Valley Conference match in any sport Friday evening and claimed the second set from the Panthers to even the match at 1-1, but UNI eventually emerged with a 3-1 (25-21, 23-25, 25-22, 25-16) victory in both teams’ conference opener.

- An early four-point run in the first set gave the Crusaders a brief lead at 4-3 before UNI fired back with five straight points. Later in the frame, another four-point spurt from the Panthers extended their lead to 15-9.

- After a UNI sideout, the Crusaders scored the next two points – including a Carlson kill – to move to within one point at 22-21. But the Panthers would close the set with the final three points to take the opener.

- Valpo controlled the first half of the second set and led 17-13 before UNI came roaring back with a 6-1 run to go ahead, 19-18. The Crusaders answered with consecutive points to retake the lead, but the Panthers responded with three of their own to take a 22-20 lead and force a Valpo timeout.

- Out of the stoppage, the Crusaders kept rattling off points as the crowd at the ARC got louder and louder. A kill by redshirt junior Allison Ketcham (Mishawaka, Ind./Marian) was followed by a block from freshman Brittany Anderson (East Chicago, Ind./Bishop Noll) and junior Sydney Bronner (Frankenmuth, Mich./Frankenmuth) to even the set at 22-all.

- After a timeout from UNI, Anderson got in the action with a kill of her own to pull the Crusaders ahead, and a Ketcham termination gave Valpo set point at 24-22. UNI successfully held off one Valpo chance to even the match, but on their second chance, the Crusaders got yet another Ketcham kill to send the match into the in-game break at one set apiece.

- UNI never trailed in the third set, as Valpo went down 5-1 early on. Down 20-14 late, the Crusaders came through with a rally to close to within 22-19, and after consecutive points from the Panthers gave them set point at 24-19, Bronner posted two blocks and a kill to keep the set alive. But a kill from UNI’s Piper Thomas closed out the frame in the Panthers’ advantage.

- The Crusaders battled UNI in the fourth set early on, tying the set at 7-7 and 9-9 and only trailing by two at 13-11 just past the midway point. Six straight points from the Panthers at that juncture gave UNI control of the deciding set.

- A balanced Crusader attack was led by 10 kills apiece from Graboski and Cummings, while Carlson added nine kills and Ketcham chipped in eight.

- The 22nd-ranked Panthers – coming off a four-set win over #10 Nebraska last weekend – ended the night with a 69-46 advantage in kills, including a match-best 23 from Thomas. UNI also out-dug the Crusaders 104-85, but the Panthers also committed 27 attack errors.

- 10 of UNI’s attack errors were courtesy of Valpo blocks, as the Crusaders reached double figures in the category for the sixth time this season. Bronner, who entered the match leading the conference in blocks/set, paced Valpo’s effort at the net with a match-high seven rejections.

- Freshman Rylee Cookerly (Brownburg, Ind./Brownsburg) led the Valpo effort in the back row with 27 digs, while Carlson backed her up with 17 digs. Anderson posted another double-double, dishing out 37 assists and tallying 15 digs to go with four kills.

- Friday’s loss snapped the Crusaders’ five-match winning streak, the program’s longest since the start of the 2015 season.

“Our crowd’s been amazing this year – I hope that everyone will keep coming out and supporting us. We’ve only been home twice so far, but both crowds have been awesome.”

“It was extremely hot today, so I’m not sure if you saw the best of both teams tonight. You could definitely tell as sets progressed that the energy level would go down.”

“(UNI is) #22 for a reason – they’re very disciplined, very well-coached and have high-IQ volleyball players. The difference between them and us right now is that they have two big hitters who put balls away on a regular basis, and we don’t really have anyone on our roster able to do that right now. We’ve been relying on our defense to wear teams out, and we’ve played some great defense this year and again tonight, but it gets hard for us when we can’t terminate balls.”

Valpo (7-6, 0-1 MVC) continues conference play on Saturday evening at the ARC as the Crusaders host Drake at 7 p.m. Live stats and a live audio broadcast (via WVUR, 95.1 FM, Valparaiso) will be available through ValpoAthletics.com.