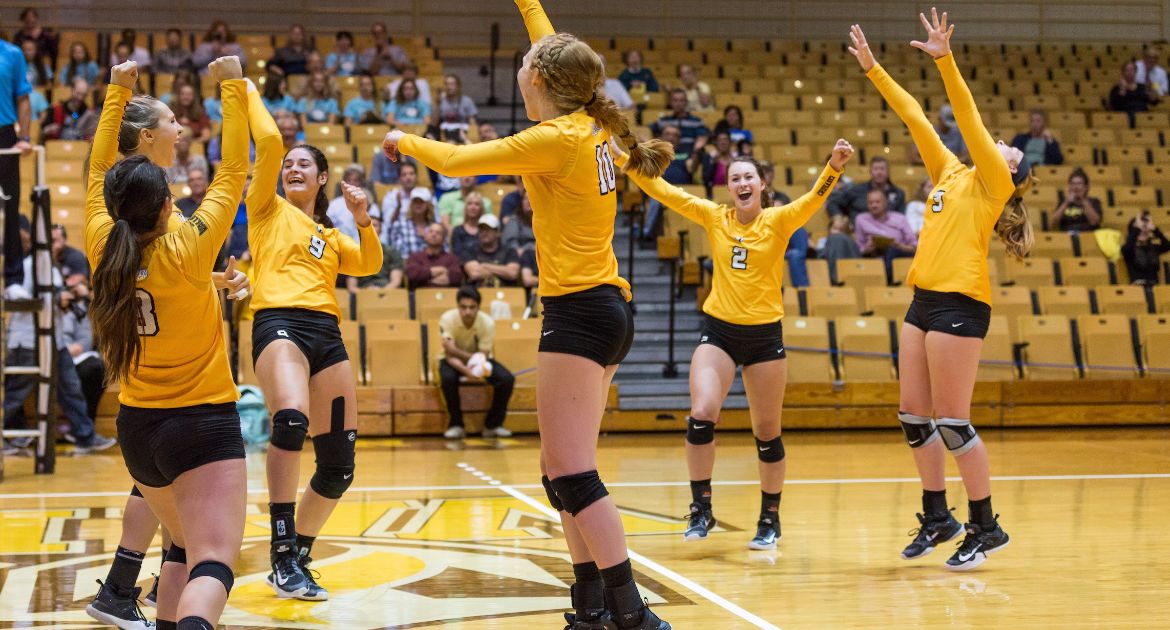 This Week in Crusader Volleyball: The Valparaiso University volleyball team continues a string of four consecutive road matches on Sunday afternoon as the Crusaders make the short trip to Chicago to face off with Loyola.

Looking Ahead: Valpo will spend next weekend away from home as well, as the Crusaders travel to Bradley on Friday, Oct. 6 and Illinois State on Saturday, Oct. 7.

Following the Crusaders: Sunday's match at Loyola will be broadcast live on The Valley On ESPN3, on WatchESPN and the ESPN app. The match will also have live stats available through ValpoAthletics.com.

Head Coach Carin Avery: In her 16th season as head coach at Valparaiso, Carin Avery has won 361 matches (361-159, .694) at the helm of the Crusaders and has led Valpo to three league regular season and tournament titles, as well as three NCAA Tournament appearances. A two-time league Coach of the Year, Avery has coached 49 All-League recipients over her tenure as Crusader head coach. She is Valpo’s all-time leader in both victories and winning percentage, and owns 416 career victories overall as a head coach.

Series Notes: Loyola holds a 27-15 edge in the all-time series over the Crusaders, including a 3-0 victory for the Ramblers in September of 2015 - the lone meeting since Loyola left the Horizon League. When the two programs previously shared league membership from 2007 through 2012, Valpo held a 10-2 advantage in the series.

Scouting the Opposition: The Ramblers enter Sunday's match with a 1-13 record on the year, including an 0-3 start to MVC play with losses to Drake, UNI and Missouri State.

Digging Deep: For the fourth consecutive week, Valpo leads the nation in digs per set, and it comes by the widest margin of the season this week. The Crusaders are averaging 21.33 digs/set over their first 12 matches, far out-pacing Notre Dame, which ranks second nationally with 19.57 digs/set. Valpo has a long tradition of strong defensive play, as the program has ranked among the top-20 nationally in digs/set in each of the last seven seasons - including a sixth-place placement in 2015 and a fourth-place finish in 2010. Freshman Rylee Cookerly continues to pace Valpo with an even 6.00 digs/set, good for sixth nationally.

Graboski Reaches Milestone: Senior Taylor Graboski became just the 15th player in program history to reach 1,000 career kills last time out, ending the third set at SIU with her 12th kill of the match to hit the milestone. Graboski now owns 1,009 career kills, just 88 away from cracking Valpo's all-time top-10, while with 308 career blocks, she is only 17 rejections away from making that top-10 list as well. Graboski has stood out so far in MVC play, averaging 3.91 kills/set on .407 hitting as well as 1.45 blocks/set.

Ketcham Moves Up As Well: Redshirt junior Allison Ketcham is poised to join a top-10 of her own in the coming weeks, as she continues to move up the Crusaders' all-time digs chart. Last week, she jumped two spots and currently ranks 15th in program history with 1,180 career digs. Ketcham is just 128 digs shy of the Crusaders' all-time top-10 and remains on pace to become the leading non-libero in program history in the category.

McCarthy Steps Right In: Freshman Peyton McCarthy was called upon to step in and start at middle Saturday night against Drake and immediately produced, matching her season best with seven kills on .267 hitting and also posting a season-high four blocks. Two nights later at SIU, Coach Avery called McCarthy's number again, and again she came through, this time tallying seven kills on just 11 swings as she hit at a .545 clip. McCarthy has now tallied seven kills in three of Valpo's last five matches.

Youth Movement: With the addition of McCarthy to the starting lineup against Drake, the Crusaders started four freshmen and played a good bit of the match with four rookies on the court. McCarthy joined classmates Ally Cummings (right side), Brittany Anderson (setter) and Rylee Cookerly (libero) among the starters on Saturday night. The quartet comprise two-thirds of Valpo's six-player freshman class.