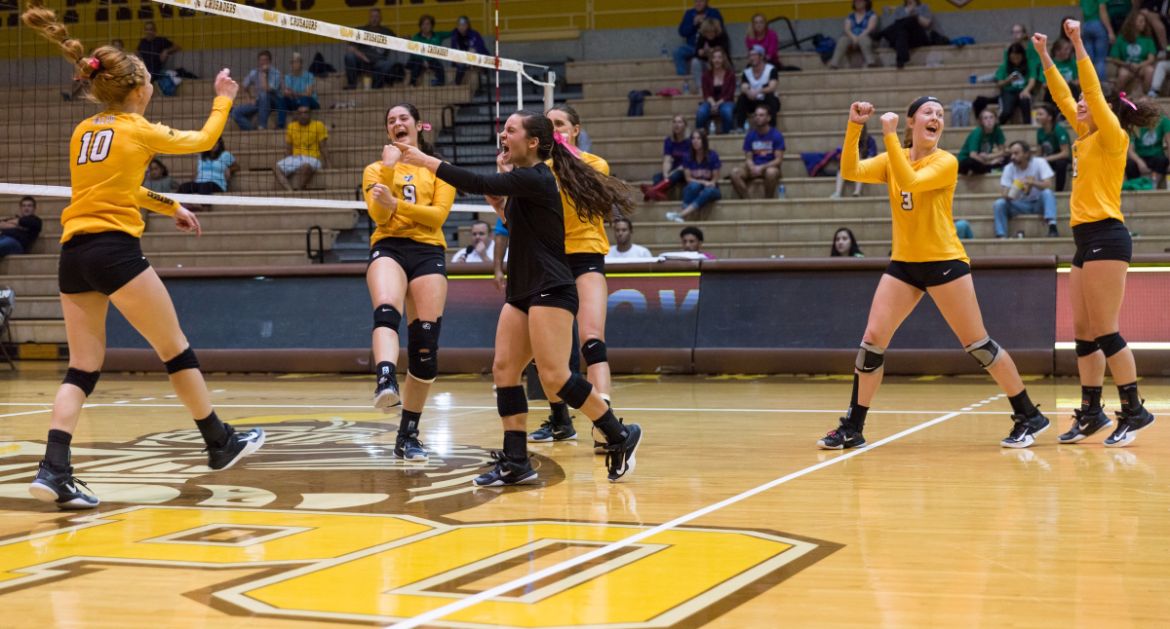 This Week in Crusader Volleyball: The Valparaiso University volleyball team closes out a quick three-match homestand with a non-conference matchup against Fort Wayne at home on Tuesday. The Crusaders then take the road as they hit the halfway mark of MVC play, traveling to take on Drake and UNI.

Looking Ahead: Just one match is on the docket next week for the Crusaders, as they host Loyola on Friday, Oct. 27.

Following the Crusaders: Tuesday night's match will be broadcast live on WVUR (95.1 FM, Valparaiso). Friday and Saturday's matches can be seen live on The Valley on ESPN3, WatchESPN and the ESPN app. Links for all the live coverage will be available through ValpoAthletics.com.

Head Coach Carin Avery: In her 16th season as head coach at Valparaiso, Carin Avery has won 364 matches (364-161, .693) at the helm of the Crusaders and has led Valpo to three league regular season and tournament titles, as well as three NCAA Tournament appearances. A two-time league Coach of the Year, Avery has coached 49 All-League recipients over her tenure as Crusader head coach. She is Valpo’s all-time leader in both victories and winning percentage, and owns 419 career victories overall as a head coach.

Series Notes: Fort Wayne - The Crusaders are just 9-12 all-time against the Mastodons, but have won the last four meetings in the series dating back to 2008. Last season, Valpo went on the road to Fort Wayne and took down the Mastodons in four sets, led by a 28-assist, 24-dig performance from Morganne Longoria.

Drake - Valpo holds a 4-3 edge all-time versus the Bulldogs, but it was Drake which came away with a three-set win in the first meeting in MVC play. Taylor Graboski led the Crusaders with 15 kills on .417 hitting and five blocks in that contest.

UNI - A series dormant for over two decades resumed last month as the Crusaders' first-ever MVC match, which resulted in a 3-1 UNI victory as the Panthers have claimed all seven matchups in the series. Rylee Cookerly tallied 27 digs in the first meeting.

Scouting the Opposition: Fort Wayne - The Mastodons enter Tuesday night's non-conference meeting at 11-11 on the year and own a 3-4 record in Summit League action. Nicole Rightnowar averages a team-high 3.37 kills/set and also tallies better than three digs per frame, while Sydney Boerst leads FW with 78 blocks on the year and hits at a team-high .332 clip.

Drake - The Bulldogs enter the week at 18-4 overall and 7-1 in MVC play, with a Tuesday night showdown against UNI looming before Friday night's match. Kyla Inderski and Cathryn Cheek combine to average 6.50 kills/set, while Kylee Macke picks up 4.98 digs/set in the back row.

UNI - The Panthers are nationally ranked for the fifth consecutive week and enter the week at #25 in the most recent AVCA poll. Piper Thomas is averaging 4.41 kills/set on .399 hitting within MVC play as the Panthers enter the week in second place in the conference standings.

Digging Deep: For the seventh consecutive week, Valpo leads the nation in digs per set as the Crusaders remain the only squad in D-I volleyball posting more than 20 digs a frame. The Crusaders are averaging 20.22 digs/set, well ahead of Bowling Green in second position (18.81 digs/set). Valpo has a long tradition of strong defensive play, as the program has ranked among the top-20 nationally in digs/set in each of the last seven seasons - including a sixth-place placement in 2015 and a fourth-place finish in 2010. Freshman Rylee Cookerly continues to pace Valpo with 5.78 digs/set, good for 10th nationally.

Moving Up the Charts: Senior Taylor Graboski and redshirt junior Allison Ketcham are poised to crack Valpo's all-time top-10's in a trio of categories over the coming weeks. First up will likely be Graboski's entry into the career blocks chart, as with 323 career blocks, she is just two rejections away from that top-10 list. Graboski is also just 21 kills shy of the top-10 in that category, and would be one of just three players in program history to rank in the top-10 in both kills and blocks. Meanwhile, Ketcham continues to move up the career digs chart and enters this week just 54 digs away from Katie Bova's 10th-place total of 1,308.

Setting the Way: Freshman Brittany Anderson continues to hold down the fort at setter this year for the Crusaders. Anderson averaged 11 assists per set in the Crusaders' pair of matches last weekend as Valpo split in MVC action. She tallied 31 assists and added 12 digs against Indiana State, and followed on Saturday with 35 assists, 12 digs and three kills in the sweep of Evansville. Anderson now owns 750 total assists on the year, just 33 away from topping Kelsey Berrington (2012) as the most prolific freshman setter in Carin Avery's 16-year tenure as head coach.

Stepping Up: Three Crusaders stepped up off the bench with strong performances last week. On Friday night against Indiana State, Lizzie Zaleski played right side the entire match and set a new career best with 12 kills. On Saturday in the sweep of Evansville, freshman Jaclyn Bulmahn, who had just 13 kills total in Valpo's first seven MVC matches, posted a season-best eight kills. In the back row, fellow rookie Melissa Flynders tallied 10 digs in the win over the Purple Aces after entering the match with just 15 digs on the year.

Youth Movement: With nearly half the Crusader roster comprised of freshmen (six of 13 players), it stands to reason that a number of the freshmen would be called upon to play big roles this year. Brittany Anderson and Rylee Cookerly have started every match this season at setter and libero, respectively, while Ally Cummings has started 16 matches on the right side. Peyton McCarthy has also made a trio of starts, and in fact, against Drake on Sept. 23, all four freshmen were in the starting lineup together.