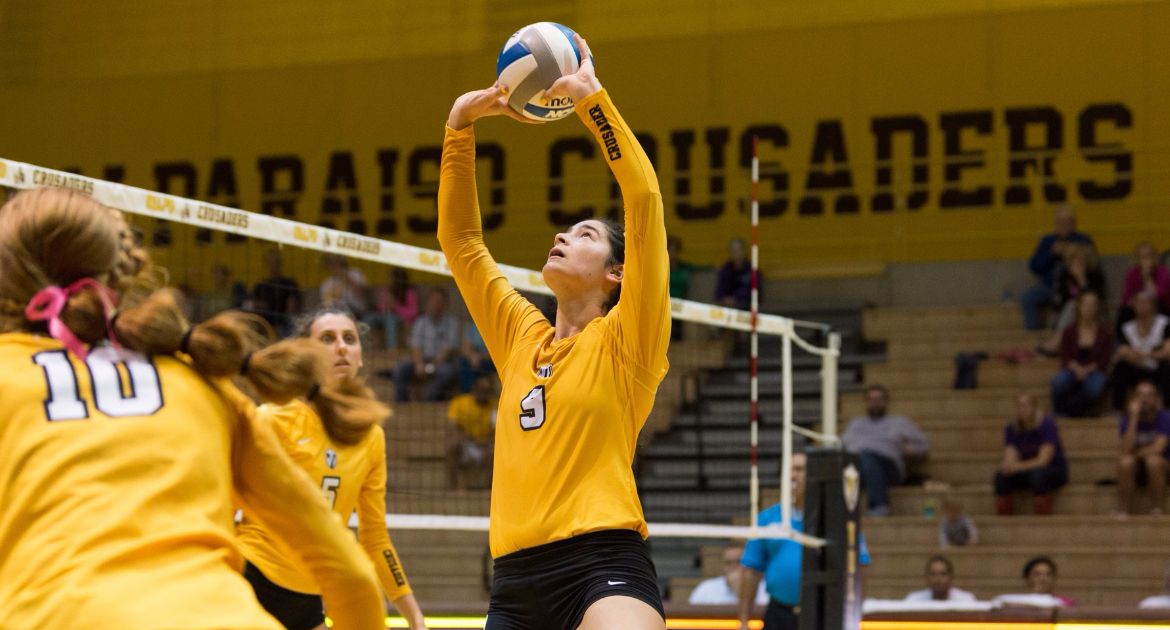 Crusaders continue MVC play with a pair of matches

This Week in Crusader Volleyball: The Valparaiso University volleyball team closes out the month of October with a pair of Valley matches this weekend. The Crusaders host travel partner Loyola at the ARC on Friday night before making the trip to Springfield, Mo. to face conference leader Missouri State for the first time this season on Monday evening.

Previously: Valpo posted a 2-1 record last week, downing Fort Wayne in non-conference action in three straight sets to open the week. The Crusaders then made the Iowa road swing in conference play, winning at Drake in a sweep before falling just short of an upset victory at #25 UNI, dropping a five-set decision to the Panthers.

Looking Ahead: Valpo's final non-conference matchup of the regular season comes next Wednesday, Nov. 1 as the Crusaders make the short trip to Chicago State. Valpo then starts a stretch where four of the season's final six matches are at the ARC, hosting Illinois State on Nov. 3 and Bradley on Nov. 4.

Following the Crusaders: Both upcoming matches are scheduled for live broadcasts on The Valley on ESPN3, WatchESPN and the ESPN app. Links for all the live coverage will be available through ValpoAthletics.com.

Head Coach Carin Avery: In her 16th season as head coach at Valparaiso, Carin Avery has won 366 matches (366-162, .693) at the helm of the Crusaders and has led Valpo to three league regular season and tournament titles, as well as three NCAA Tournament appearances. A two-time league Coach of the Year, Avery has coached 49 All-League recipients over her tenure as Crusader head coach. She is Valpo’s all-time leader in both victories and winning percentage, and owns 421 career victories overall as a head coach.

Series Notes: Loyola - Loyola holds a 27-16 edge in the all-time series over the Crusaders, but it was Valpo which earned a 3-1 win in the first matchup of the season in Chicago - led by 13 kills from Taylor Graboski and 12 kills and 14 digs from Allison Ketcham. When the two programs previously shared league membership from 2007 through 2012, Valpo held a 10-2 advantage in the series.

Missouri State - The Crusaders and Bears have met just twice on the volleyball court over the years, with MSU winning both matchups - one in 1999 and one in 2006 - in three sets in Springfield.

Scouting the Opposition: Loyola - The Ramblers enter Friday night's match at 1-20 overall this year and are still looking for their first win in Valley play. They were swept by UNI and Drake last weekend on the road after dropping three consecutive five-set matches to MVC opponents. Gabi Maciagowski leads Loyola with 2.81 kills/set.

Missouri State - The Bears enter the weekend atop the MVC standings and have won 11 straight matchups, with home games against Evansville and Indiana State prior to the Crusaders' visit on Monday night. All-American candidate Lily Johnson leads the way for MSU, as the conference's record-holder for career kills averages 4.33 kills/set on .250 hitting and also records 3.93 digs/set. Lynsey Wright adds an even 3.00 kills/set on .311 hitting as well.

Digging Deep: For the seventh consecutive week, Valpo leads the nation in digs per set as the Crusaders remain the only squad in D-I volleyball posting more than 20 digs a frame. The Crusaders are averaging 20.39 digs/set, well ahead of UNI in second position (18.90 digs/set). Valpo leads the way as five MVC programs rank in the top-seven nationally in the category. Valpo has a long tradition of strong defensive play, as the program has ranked among the top-20 nationally in digs/set in each of the last seven seasons - including a sixth-place placement in 2015 and a fourth-place finish in 2010. Freshman Rylee Cookerly continues to pace Valpo with 5.86 digs/set, good for 10th nationally.

A Record Pace: So far this season, the Crusaders have posted 73.56 digs per match, as they have totaled 1,692 digs through 23 matches. Their per-match average puts them on pace to set a new program single-season team record for total digs - which currently sits at 2,479, by the 1991 squad - should the Crusaders play 34 matches this season.

Pushing Them to the Brink: Valpo was in search Saturday of its first win over a nationally-ranked team in program history and came up just short, as the Crusaders had a match point opportunity in the fourth set. Prior to Saturday's effort at UNI, the Crusaders last took a top-25 team to five sets in September of 2005, falling to then-#11 UCLA 3-2 in Madison, Wis.

One Player, Two Spots on the Charts: Senior Taylor Graboski is now one of just three players in Valpo program history to rank among the Crusaders' all-time top-10 in both career kills and career blocks. Graboski moved into the top-10 in blocks in Valpo's win last week over Fort Wayne, and then cracked the top-10 in kills at UNI. With 1,112 career kills, she currently ranks ninth all-time at Valpo, while she sits 10th on the blocks chart with 333 rejections. Graboski joins Lauren Moulton (2002-05) and Kelly Schoenhoft (1995-98) as the only Crusaders to rank among the top-10 in both categories.

Another Top-10 On the Way: Redshirt junior Allison Ketcham is poised to make her mark on the Crusaders' career digs top-10 chart this weekend. Ketcham enters Friday night's match with 1,296 career digs, just 12 shy of Katie Bova's career total of 1,308, which currently ranks 10th in Valpo history. Ketcham's play in the back row has been strong as ever this year, as she has reached double figures in digs in all but two of the Crusaders' 23 matches and she is on pace to finish as the conference's top non-libero in digs, averaging 4.34 digs/set.

Bronner Earns Defensive Honor: Junior middle Sydney Bronner became the first Valpo player to earn Defensive Player of the Week accolades in the Missouri Valley Conference, as she was so honored after tallying 14 blocks over the Crusaders' pair of conference matches last weekend. Bronner led all players with six blocks in the sweep of Drake, and then followed with a match-high eight rejections at #25 UNI - tying the second-highest single-match total of her career. Bronner currently leads the conference, averaging 1.10 blocks/set for the season.