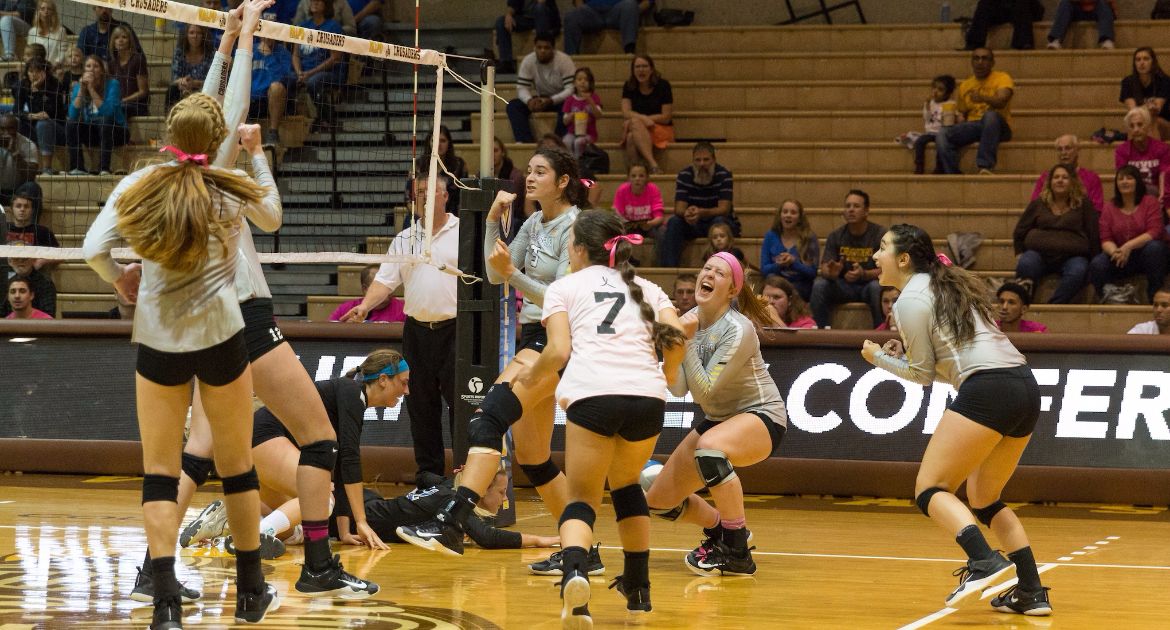 This Week in Crusader Volleyball: The Valparaiso University volleyball team will keep busy this week, facing three opponents in the span of four nights. The Crusaders will make the short trip to Chicago for their final non-conference match of the year Wednesday night against Chicago State before returning home to the ARC for a weekend of MVC play against Illinois State Friday evening and Bradley Saturday night.

Previously: Valpo split a pair of matches last weekend, sweeping Loyola in straight sets at the ARC Friday night and falling in four sets on the road at Valley leader Missouri State on Monday.

Looking Ahead: The final road trip of the regular season awaits the Crusaders next weekend, as they travel to Evansville on Friday, Nov. 10 and Indiana State on Saturday, Nov. 11.

Following the Crusaders: Wednesday night's match will be broadcast through the WAC Digital Network, while Friday and Saturday night's matches are scheduled for live broadcasts on The Valley on ESPN3, WatchESPN and the ESPN app. Links for all the live coverage will be available through ValpoAthletics.com.

Head Coach Carin Avery: In her 16th season as head coach at Valparaiso, Carin Avery has won 367 matches (367-163, .692) at the helm of the Crusaders and has led Valpo to three league regular season and tournament titles, as well as three NCAA Tournament appearances. A two-time league Coach of the Year, Avery has coached 49 All-League recipients over her tenure as Crusader head coach. She is Valpo’s all-time leader in both victories and winning percentage, and owns 422 career victories overall as a head coach.

Illinois State - The Redbirds are 3-2 all-time against the Crusaders, and earned a win in five sets over Valpo in the first matchup this year. Taylor Graboski led the way for the Crusaders, hitting .419 with 21 kills.

Bradley - The Crusaders own a slight 8-7 advantage in the all-time series with the Braves, and Valpo has enjoyed the better of it recently, with wins in each of the last four matchups dating back to 2007. Valpo took down Bradley in straight sets in early October in Peoria, led by 11 kills from Katherine Carlson and eight kills apiece from Taylor Graboski and Allison Ketcham.

Digging Deep: For the seventh consecutive week, Valpo leads the nation in digs per set as the Crusaders remain the only squad in D-I volleyball posting more than 20 digs a frame. Through Monday's MSU match, the Crusaders are averaging 20.30 digs/set, well ahead of UNI in second position (19.21 digs/set). Valpo leads the way as five MVC programs rank in the top-six nationally in the category. Valpo has a long tradition of strong defensive play, as the program has ranked among the top-20 nationally in digs/set in each of the last seven seasons - including a sixth-place placement in 2015 and a fourth-place finish in 2010. Freshman Rylee Cookerly continues to pace Valpo with 5.79 digs/set, good for ninth nationally.

A Record Pace: So far this season, the Crusaders have posted 73.08 digs per match, as they have totaled 1,827 digs through 25 matches. Their per-match average puts them on pace to set a new program single-season team record for total digs - which currently sits at 2,479, by the 1991 squad - should the Crusaders play 34 matches this season.

Challenging Conference Showdowns: In its 10 years in the Horizon League, the Crusaders never had a league matchup against a team even receiving votes in the AVCA top-25 poll. But in their first season in the Valley, Valpo has already faced a nationally-ranked UNI squad twice (#21 in first meeting; #25 in second meeting) and on Monday took on a Missouri State team which is just two spots outside of the top-25. The Crusaders acquitted themselves well in all three matches, taking at least one set in all three contests and pushing UNI to five sets in Cedar Falls, Iowa.

One Player, Two Spots on the Charts: Senior Taylor Graboski is now one of just three players in Valpo program history to rank among the Crusaders' all-time top-10 in both career kills and career blocks. Graboski moved into the top-10 in blocks in Valpo's win over Fort Wayne, and then cracked the top-10 in kills at UNI. With 1,129 career kills, she currently ranks ninth all-time at Valpo, just five kills shy of Sarah Dooms in eighth position. Graboski also sits 10th on the blocks chart with 341 rejections. Graboski joins Lauren Moulton (2002-05) and Kelly Schoenhoft (1995-98) as the only Crusaders to rank among the top-10 in both categories.

Ketcham Cracks Digs List: Redshirt junior Allison Ketcham moved into Valpo's top-10 in career digs earlier this week as well. With her first dig against Missouri State on Monday, Ketcham earned solo possession of 10th place. She has now tallied 1,326 career digs - just 69 away from ninth position. Ketcham's play in the back row has been strong as ever this year, as she has reached double figures in digs in all but two of the Crusaders' 25 matches and she is on pace to finish as the conference's top non-libero in digs, averaging 4.33 digs/set.

Bronner Earns Defensive Honor: Junior middle Sydney Bronner became the first Valpo player to earn Defensive Player of the Week accolades in the Missouri Valley Conference, as she was so honored on Oct. 23 after tallying 14 blocks over the Crusaders' pair of conference matches the previous weekend. Bronner led all players with six blocks in the sweep of Drake, and then followed with a match-high eight rejections at #25 UNI - tying the second-highest single-match total of her career. Bronner currently leads the conference, averaging 1.10 blocks/set for the season.

Anderson Sets the Pace: Valpo has posted its top two hitting percentages of the season over the course of the last four matches (.295 at Drake, .293 vs. Loyola), and it has come, as has been the case all season long, with freshman Brittany Anderson setting all the way around. Anderson has now tallied 938 assists on the year, easily the most by a Crusader freshman under Avery, and has set the Valpo offense to a .202 hitting percentage within MVC play, improving upon its .167 clip outside of conference action.

Setting New Highs: With the Crusaders leading the nation in digs, it only stands to reason that a number of players would have to step up in the back row to do so, and a couple have done just that in the past week-plus. At UNI on Oct. 21, freshman Melissa Flynders shattered her previous season high as she picked up 16 digs. Then, last time out at Missouri State, sophomore Alana Brown - who entered the match with a career high of 12 digs - posted 15 digs in the four-set matchup with the Bears.