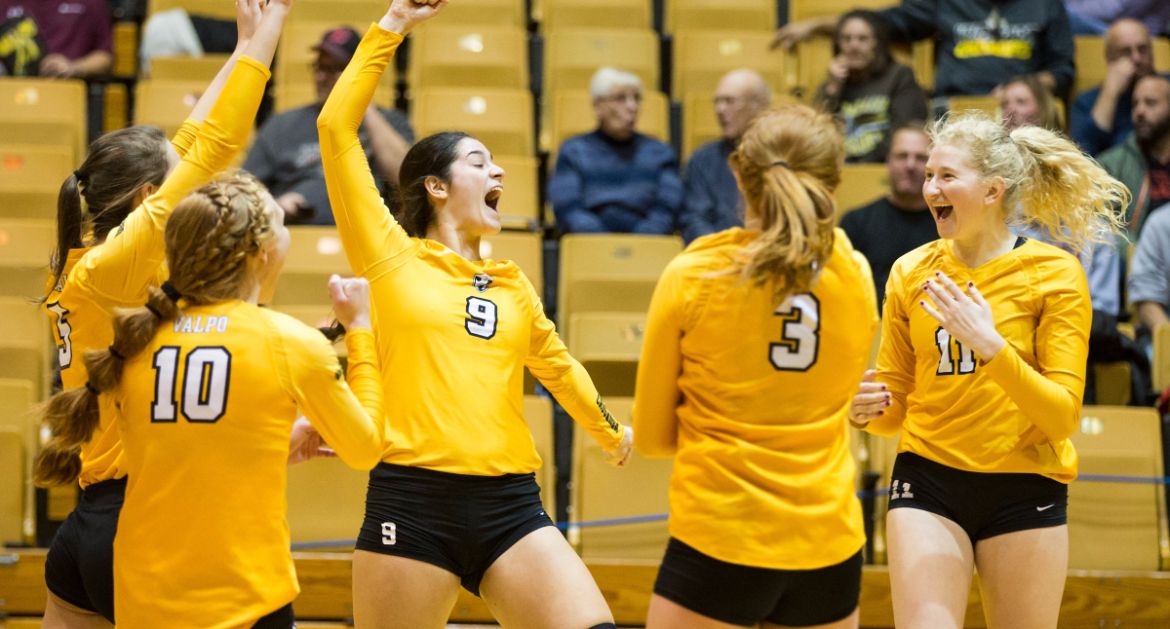 Previously: Valpo split its final weekend of MVC regular season action, dropping a three-set decision to #25 Missouri State on Friday evening before sweeping Southern Illinois on Saturday night. The Crusaders clinched their berth in the MVC Tournament late in Friday’s match, as SIU lost to Loyola.

Following the Crusaders: The entirety of the MVC Tournament will be broadcast live on The Valley on ESPN3, WatchESPN and the ESPN app. Links for all the live coverage, including live video and live stats, will be available through ValpoAthletics.com.

Head Coach Carin Avery: In her 16th season as head coach at Valparaiso, Carin Avery has won 371 matches (371-166, .691) at the helm of the Crusaders and has led Valpo to three league regular season and tournament titles, as well as three NCAA Tournament appearances. A two-time league Coach of the Year, Avery has coached 49 All-League recipients over her tenure as Crusader head coach. She is Valpo’s all-time leader in both victories and winning percentage, and owns 426 career victories overall as a head coach.

Valpo In The Postseason: In 13 of head coach Carin Avery’s 15 seasons, Valpo has advanced to at least its conference tournament semifinal match. In 10 years in the Horizon League, the Crusaders were 11-10 in the HL Tournament and advanced to the semifinals nine times - including four berths in the title match. Prior to that, the Crusaders went 7-2 in their final five years in the Mid-Continent Conference in the Mid-Con Tournament, winning three tournament titles.

Digging Deep: Valparaiso enters the MVC Tournament leading the nation in digs per set for the 10th consecutive week. The Crusaders remain the only team in the nation averaging better than 20 digs per set, as they enter the tournament at 20.01 digs per set, and are attempting to become just the second team in the 25-point rally era to average at least 20 digs per set. Valpo has a long tradition of strong defensive play, as the program has ranked among the top-20 nationally in digs/set in each of the last seven seasons - including a sixth-place placement in 2015 and a fourth-place finish in 2010.

Cookerly Enjoys Standout Rookie Year: Coming off the heels of three straight four-year starters for the Crusaders at libero, freshman Rylee Cookerly has kept up the strong play leading Valpo’s back row. Cookerly enters the MVC Tournament ranked among the top-10 in the nation with 5.84 digs per set. She has already set Valpo’s single-season record for digs by a freshman with 660 total digs and ranks seventh overall on the Crusaders’ single-season chart in the category - just 20 shy of fourth position.

Graboski Leads the Way: The lone senior on the court for the Crusaders this year, middle Taylor Graboski has posted the best numbers of her career in her final season. Graboski leads the Crusaders with 2.88 kills per set on .260 hitting and also is just one block shy of Sydney Bronner for team-high honors with 106 rejections. Graboski moved into Valpo’s career top-10 charts in kills, total blocks and solo blocks this season, and is one of just three players in program history to rank among the top-10 in both kills and blocks.

Pacing the Conference: While the Crusaders obviously lead the MVC in digs by virtue of leading the nation in the category, they also own the conference’s best mark in a pair of other categories. Valpo has tallied a conference-best 1.25 service aces/set, led by junior Katherine Carlson, who paces the league individually (0.36/set). The defense at the net for the Crusaders has been the conference’s best as well, as Valpo has recorded 2.18 blocks/set, led by Sydney Bronner - who leads the conference with an even one block per frame.

Third Time’s The Charm: Redshirt junior Allison Ketcham is aiming to lead her conference in digs by a non-libero for the third time in her career. Ketcham - who has reached double figures in digs 28 times this year, including six efforts of 20 or more digs - is averaging 4.31 digs/set this season to pace all non-liberos in the MVC. Ketcham previously led the Horizon League in digs by non-liberos in 2014 and 2015.

Crusaders Picked Seventh in Preseason Poll: Valpo was picked to finish in seventh place in the Missouri Valley Conference during the 2017 season, according to preseason polling of the league’s head coaches. The Crusaders totaled 32 points in the polling to place seventh. Defending champion Missouri State received nine of 10 first-place votes and sat atop the poll, while UNI picked up the other first-place nod and placed second. This year is the first time in the last 15 seasons Valpo has been picked lower than third in a conference preseason poll.