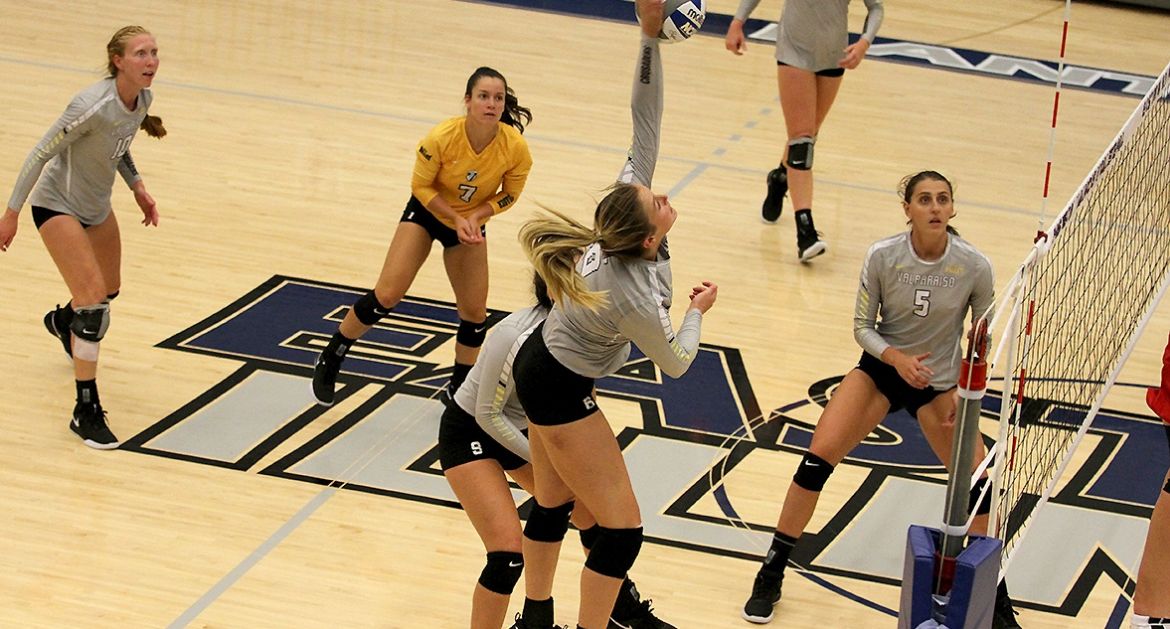 The Valparaiso University volleyball team kicked off the 2018 season Friday at the EIU Panther Invitational in Charleston, Ill., splitting its two matches on the day. Valpo led Fresno State 2-1 before falling by a 3-2 final in its opener, but bounced back in the afternoon to earn a 3-1 victory over Saint Francis (Pa.).

How It Happened – Fresno State
- The Bulldogs limited Valpo to negative hitting in the first set as Fresno State took the opener.
- Valpo bounced back in the second set, hitting .366 with 21 kills to even the match at one set apiece. Fresno State had set point at 24-23, but a kill and a solo block from sophomore Peyton McCarthy (Cincinnati, Ohio/Seton) turned the tables and gave Valpo a 25-24 advantage. An FSU kill evened the set at 25-all, but sophomore Ally Cummings (Novi, Mich./Novi) gave Valpo another set point chance and McCarthy finished the frame with a kill.
- It was smoother sailing for the Crusaders in set three, as leading 15-13, they went on a 4-0 spurt – including two kills from senior Katherine Carlson (Lake Orion, Mich./Notre Dame Prep) – to pull ahead by six and eased to the set win from there.
- But Valpo would be unable to come out on top, as Fresno State used a 5-0 run nearing the midway point of the fourth set to create separation and eventually force a fifth frame. Then, in the decisive final set, the Bulldogs scored four straight early to go ahead 5-2 and Valpo trailed the rest of the way.

How It Happened – Saint Francis
- Valpo’s attack was sizzling from the get-go against the Red Flash, as the Crusaders hit .364 in the opening set. Saint Francis briefly tied the set approaching the late stages at 17-all, but Valpo scored three of the next four points and the teams traded sideouts the rest of the way.
- With the second set tied at 16-16, the Red Flash scored five of the next six points to take control and tie the match at 1-1.
- Valpo rebounded in the third set, going on an early 9-2 run to pull ahead 13-5 and cruise from there.
- A six-point run on the serve of sophomore Brittany Anderson (East Chicago, Ind./Bishop Noll) gave Valpo a big early edge in the fourth set, as the Crusaders went ahead 11-4 and never looked back in completing the win.

Inside the Matches
- Senior Sydney Bronner (Frankenmuth, Mich./Frankenmuth) enjoyed a dream match on the attack against Saint Francis. Bronner posted a team-high 11 kills on just 15 swings, hitting at a .667 clip – the second-best mark in a four-set match by a Valpo player in the 25-point era.
- Bronner was backed up on the attack against the Red Flash by senior Lizzie Zaleski (Oak Lawn, Ill./Marist), who posted nine kills, and McCarthy and sophomore Jaclyn Bulmahn (McCordsville, Ind./Mt. Vernon), who each tallied eight kills. For Bulmahn, that matched her career high in the category.
- As a team, Valpo hit .292 with 61 kills over the four sets against the Red Flash.
- Anderson totaled 50 assists in the win and tied career highs in the victory in both digs (19) and blocks (5) as well, pacing Valpo in both categories. McCarthy matched Anderson for team-high honors with five blocks as the Crusaders posted 14 total team blocks.
- McCarthy led the way for Valpo in the morning match against Fresno State, smashing her previous career high as she picked up 17 kills on .364 hitting.
- Carlson and fellow senior Allison Ketcham (Mishawaka, Ind./Marian) each joined McCarthy in double figures, registering 12 and 11 kills, respectively.
- Both seniors finished the opener with double-doubles, as Carlson tallied 17 digs and Ketcham 13. Combined with her five digs against Saint Francis, Carlson enters Saturday just three digs shy of 1,000 for her career.
- Anderson opened the season with a double-double as well, posting 41 assists and 12 digs.
- Sophomore Rylee Cookerly (Brownsburg, Ind./Brownsburg) kicked off her second season with 21 digs in the opener against Fresno State, and added 16 in the afternoon win over Saint Francis.
- Fresno State out-aced the Crusaders in the opener, 12-2.

Next Up
Valpo (1-1) closes the EIU Panther Invitational on Saturday with two more matches, taking on Iona at 10 a.m. before closing the tournament against the hosts at 7 p.m.