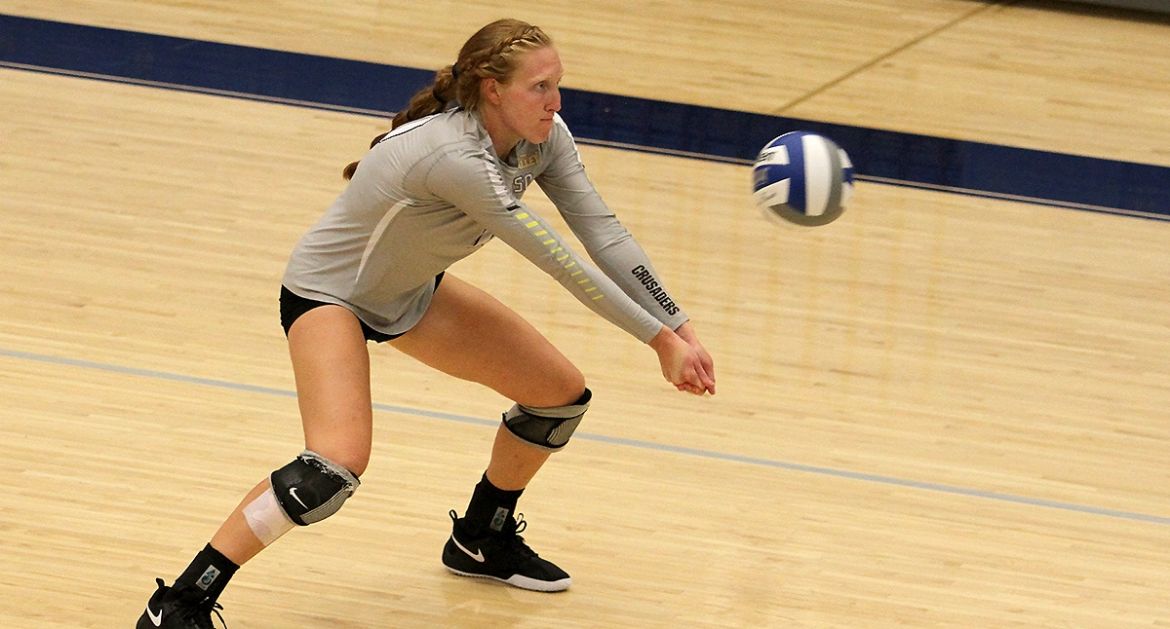 This Week in Valpo Volleyball: The Valparaiso University volleyball team continues early-season play this weekend with a trip to Mount Pleasant, Mich. to compete in the Chippewa Invitational. Valpo will face off with DePaul and La Salle on Friday before closing the tournament against host Central Michigan on Saturday.

Previously: Valpo went 3-1 in its first tournament of the year, spending opening weekend at the EIU Panther Invitational. The Crusaders dropped their season opener to Fresno State, 3-2, but rebounded with three straight wins over Saint Francis [Pa.] (3-1), Iona (3-0) and Eastern Illinois (3-1).

Looking Ahead: A mid-week contest at #23 Michigan is on the slate for next Tuesday night before Valpo flies west for the Amy Svoboda Memorial Classic at Air Force next weekend.

Following the Crusaders: Live stats and live video for all three matches this weekend will be available, with links posted on ValpoAthletics.com.

Head Coach Carin Avery: In her 17th season as head coach at Valparaiso, Carin Avery has won 374 matches (374-168, .690) at the helm of the Crusaders and has led Valpo to three league regular season and tournament titles, as well as three NCAA Tournament appearances. A two-time league Coach of the Year, Avery has coached 55 All-League recipients over her tenure as Crusader head coach. She is Valpo’s all-time leader in both victories and winning percentage, and owns 429 career victories overall as a head coach.

Series History: Former conference foes in the North Star Conference, Valpo is 13-18 all-time against DePaul. The two teams haven’t met since 2011, when Valpo swept the Blue Demons at the DePaul Invitational.

Valpo earned a 3-1 win over La Salle in the only previous meeting between the two teams, which came in 2010 at the La Salle Invitational.

Valpo owns a 3-2 record in the all-time series with Central Michigan, but the Chippewas came away with a 3-1 win in the last matchup as part of the 2016 Popcorn Classic.

All-Tournament Honors: Valpo had a pair of players earn All-Tournament Team accolades at the conclusion of action at EIU. Sophomore Brittany Anderson set the Valpo offense all tournament long as the Crusaders hit .250 as a team over the four matches, averaging 10.62 assists and 3.19 digs per set. Fellow sophomore Peyton McCarthy led Valpo on both sides of the ball as the Crusaders posted a 3-1 record, averaging 2.87 kills/set on .341 hitting and also tallying 1.47 blocks/set. It was the first career All-Tournament honor for McCarthy and the third for Anderson.

Milestones and Records: A pair of Valpo players hit noteworthy marks on the opening weekend of play. Senior Sydney Bronner had one of the best offensive matches of her career in the win over Saint Francis, tallying 11 kills on just 15 attacks for a .667 hitting percentage - the second-best hitting percentage in a four-set match in the 25-point era by a Valpo player. Then, the next morning versus Iona, senior Katherine Carlson reached the 1,000-dig milestone for her career late in the first set, becoming the 20th player in program history to reach four figures in digs. Carlson is now just 108 kills away from joining the eight current members of the 1,000 kill/1,000 dig club all-time at Valpo, while fellow senior Allison Ketcham is just 115 kills away from the same club and just nine digs away from becoming the eighth Valpo player to reach 1,500 career digs.