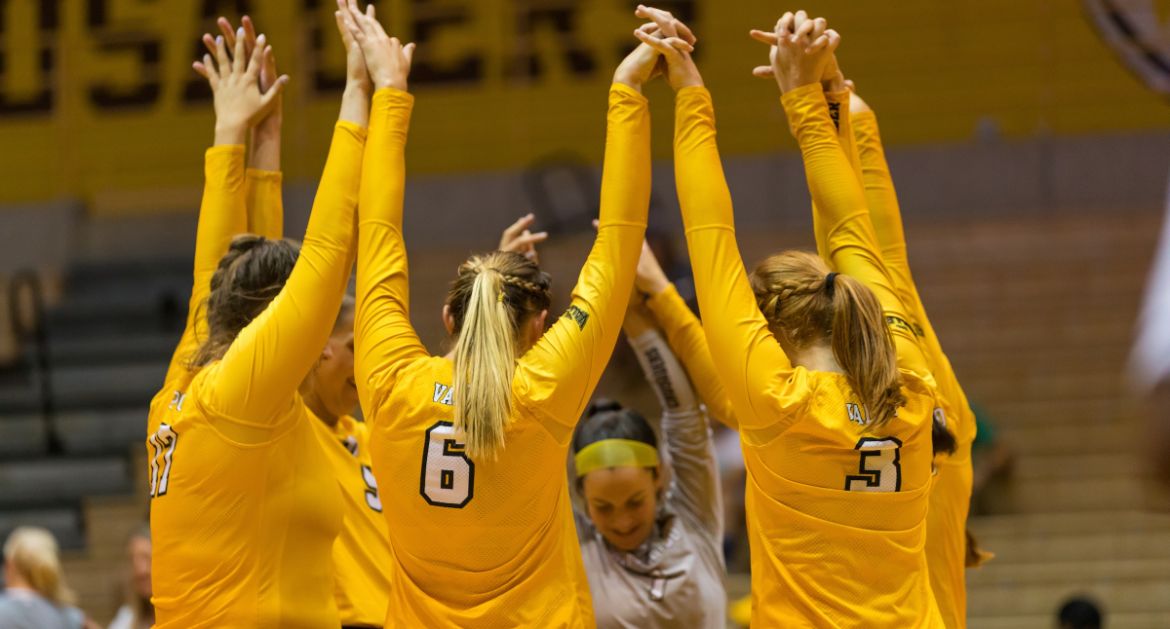 This Week in Valpo Volleyball: The Valparaiso University volleyball team briefly steps away from tournament play with a Tuesday night matchup at nationally-ranked Michigan before heading to Colorado for the Amy Svoboda Memorial Classic at Air Force.

Looking Ahead: Valpo’s final non-conference tournament will be at home at the ARC, as the Crusaders welcome Cornell, Western Illinois and Wright State Sept. 14-15.

Following the Action: Live stats will be available for all four matches this week, with live video streaming of all matches at Air Force available as well.

Head Coach Carin Avery: In her 17th season as head coach at Valparaiso, Carin Avery has won 377 matches (377-168, .692) at the helm of the Crusaders and has led Valpo to three league regular season and tournament titles, as well as three NCAA Tournament appearances. A two-time league Coach of the Year, Avery has coached 55 All-League recipients over her tenure at Valpo. She is Valpo’s all-time leader in both victories and winning percentage, and owns 432 career victories overall as a head coach.

Series History: Valpo has faced Michigan twice, dropping a 3-1 decision in Ann Arbor in 2003 and falling at the ARC, 3-0, in 2004. In an odd twist, this is the third straight season Valpo and CSU Bakersfield have matched up at an early-season tournament, and a second at a military academy. Valpo won at West Point in 2016, 3-1, while CSU Bakersfield earned a 3-1 win last year at South Dakota State. Valpo will match up for the first time against both Air Force and Cal Baptist this week.

Another Tournament Title: Valpo’s four-set win over Central Michigan on Saturday secured the Chippewa Invitational tournament championship, continuing a long run of tournament success for the Crusader program. In Carin Avery’s 17th year as head coach at Valpo, the program has now claimed 25 in-season tournament titles. Dating back to last year, Valpo has won three of the last four in-season tournaments it has competed in.

On a Roll: With its three wins last weekend, Valpo has now won six straight matches since dropping its season opener. The six-match winning streak is the program’s longest since the 2015 team opened that season with nine consecutive victories.

Facing Ranked Opposition: Valpo heads to Cliff Keen Arena in Ann Arbor this week to face a nationally-ranked Michigan squad, something it has become familiar with over the last year. In its first season of MVC play in 2017, Valpo had three matches against top-25 teams, hosting #22 UNI and #25 Missouri State and traveling to #25 UNI in a match it took to five sets. Valpo’s last non-conference matchup against a top-25 team on Sept. 16, 2016 against #19 Ohio State in a tournament at Ball State.

Ketcham Reaches a Milestone: Senior Allison Ketcham has quite simply been the most prolific non-libero in the back row, no matter the conference Valpo has been in, throughout her career, and she reached another milestone last weekend. Ketcham surpassed 1,500 career digs in Valpo’s win over DePaul, just the eighth player in program history to reach the mark. She is now just 132 digs away from becoming the highest-ranking non-libero in digs in Crusader history.

Talk About Efficient: For a program renowned for its defense and which led the nation last year in digs/set, Valpo’s attack has been strong through the first two weekends of the season - never more so than in Saturday’s win over Central Michigan. Valpo hit at a .396 clip for the match, finishing with 64 kills and just 11 hitting errors on 134 total attacks. The .396 hitting percentage is the best mark for a four-set match by a Valpo squad in the rally-scoring era, and second-best overall in a four-set match in program history. It also marked Valpo’s best hitting percentage in any length match since the Brown and Gold hit .419 versus Chicago State in September of 2015.