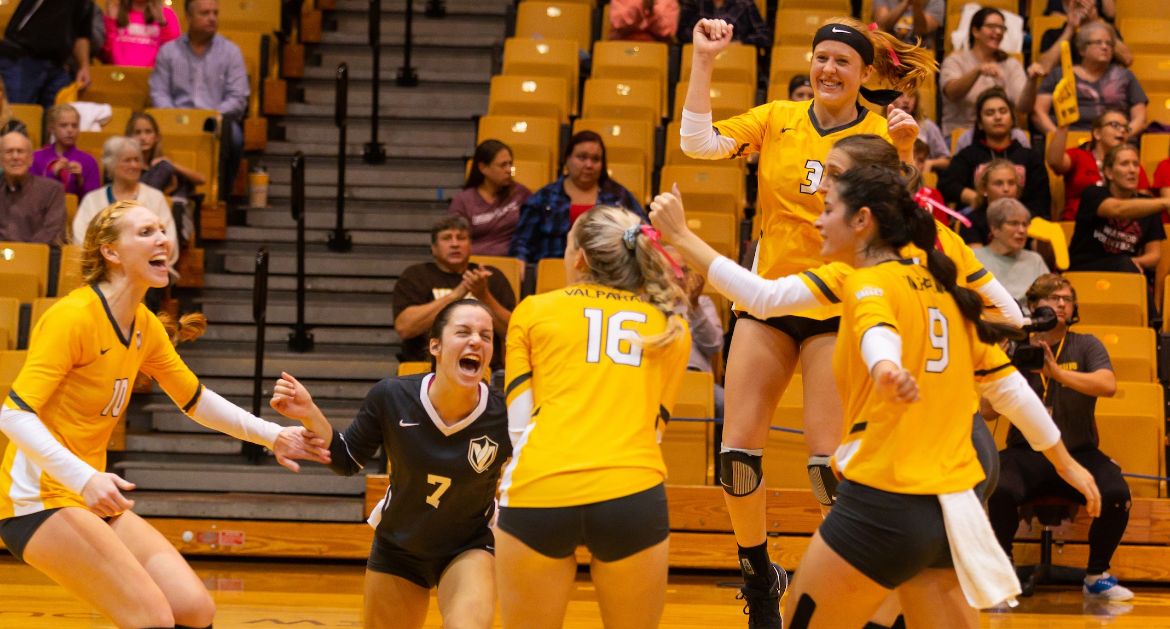 It was something that fans at the ARC haven’t witnessed in nearly a decade. After dropping the first two sets Friday night in MVC play to Loyola, the Valparaiso University volleyball team regrouped and, buoyed by a raucous crowd, roared from behind to win the next two sets and then, in the fifth frame, claimed six of the match’s final seven points to take down the Ramblers, 3-2 (19-25, 23-25, 25-19, 25-22, 15-12). The win pushes Valpo’s record to 18-3 overall and leaves the team alone in second place in The Valley standings at 5-1.

How It Happened
- Trailing by two sets, Valpo came out in set three and, despite hitting just .065 on offense, limited Loyola to just .040 hitting defensively to crawl back into the match.
- The big run came early on in the set, as Valpo took a 7-6 lead and extended it to 14-7 – mostly on the serve of sophomore Rylee Cookerly (Brownsburg, Ind./Brownsburg). Fellow sophomore Peyton McCarthy (Cincinnati, Ohio/Seton) helped key the run with two kills and two blocks. Valpo’s lead never fell below four points the rest of the way as the team pushed the match to a fourth set.
- The fourth set proved to be a set of spurts early on, as the two sides combined for five runs of three points or more by the team they reached the halfway point.
- The last of those five runs came as Valpo reeled off five consecutive points – including two kills and a service ace from senior Katherine Carlson (Lake Orion, Mich./Notre Dame Prep) – to go ahead 13-9.
- The lead was still four points at 18-14 before Loyola made a push to try to close out the match in its favor. The Ramblers scored six of the next eight points to tie the frame at 20 apiece, and the teams then traded sideouts as the fourth set became a race to four.
- Senior Allison Ketcham (Mishawaka, Ind./Marian) came up with a big kill to give Valpo the one-point edge, and then the Brown and Gold gained a tiny bit of breathing room thanks to a Loyola attack error. A kill from the Ramblers cut the advantage to 23-22, but a huge block from McCarthy and Ketcham gave Valpo set point, and Carlson needed just one swing to send the match to a decisive fifth set.
- It was a tug-of-war for control early in the fifth set, which eventually featured nine ties and three lead changes. The first multi-point lead came for Loyola at 7-5, but Valpo quickly erased that on a kill by senior Sydney Bronner (Frankenmuth, Mich./Frankenmuth) and a Loyola error.
- Valpo was unable to gain the outright advantage, though, and after the teams traded a pair of sideouts apiece, the Ramblers posted a kill and a block to go ahead 11-9 and force a Valpo timeout.
- Out of the stoppage, it would be all Valpo. Three consecutive kills from sophomore Brittany Anderson (East Chicago, Ind./Bishop Noll), sophomore Ally Cummings (Novi, Mich./Novi) and Carlson turned the deficit into a 12-11 advantage, and Bronner then teamed up with Carlson on a rejection to make it 13-11 Valpo.
- Loyola cut the lead back down to one with a kill of its own, but Valpo responded as Cummings picked up her fourth kill of the fifth set to give Valpo match point at 14-12. It would take just one point for Valpo to close out the comeback, as Anderson went over with an attack on the second hit to cap the thrilling victory.
- Loyola jumped out to a 2-0 advantage largely on the back of Quinn Spieker, who picked up 13 kills in the first two sets alone. The Ramblers claimed the lead for good early in set one at 6-5 and pulled away with a four-point run in the middle of the frame.
- Then, in set two, Valpo rallied after trailing for much of the set to claim a 19-18 lead. Loyola responded with four of the next five points, and the teams traded sideouts the rest of the way as the Ramblers went ahead 2-0.

Inside the Match
- Valpo improved to 18-3 with Friday night’s win, joining the 2004 team as the only teams in program history to sit at 18-3 through 21 matches. Valpo is one of just two teams in the nation with 18 victories, joined by Stephen F. Austin.
- Valpo now sits alone in second place in the MVC standings at 5-1 and is off until next Friday.
- Rallying from two sets down to win a match is a tough accomplishment for any team, and that holds true for Valpo. Friday’s victory was just the ninth time in the tenure of head coach Carin Avery that the squad has been down 2-0 and come back for a five-set win.
- Valpo last earned a 3-2 victory after being down 2-0 on Sept. 24, 2016 in a thriller at UIC.
- The last time Valpo’s home fans saw the team go down 2-0 and come all the way back for the 3-2 win came way back on Halloween night, 2009, when Valpo roared from behind for a five-set win over Oakland. In fact, until Friday night, that was the only time Valpo had overcome a 2-0 deficit at home under Avery.
- Going to five sets for just the third time this year, the team set a few season highs. As a team, Valpo posted a season-best 67 kills. Individually, Anderson recorded a season-high 56 assists, while McCarthy set a new career high with nine blocks to help contribute to nearly all of Valpo’s 11 team blocks.
- Despite the season-high 67 kills as a team, it was still a balanced Valpo offense, as seven different players registered at least six kills – led by 14 kills off the outside from Carlson. Ketcham tallied 13 kills, while senior Lizzie Zaleski (Oak Lawn, Ill./Marist) posted 12 kills on .269 hitting.
- Anderson ended the match with her sixth kill of the night on just her ninth attack, setting a new career high for kills in the process.
- Entering the match as the nation’s leader in total digs, Valpo racked up an even 100 digs on the back line Friday night. Cookerly led the way with 27 digs, while Carlson set a season high with 24 digs. Ketcham (22 digs) and Anderson (13 digs) joined Carlson in finishing with double-doubles thanks to their work in the back.
- Friday was the first match since a win over McNeese on Sept. 15, 2017 that three Valpo players all finished with at least 20 digs – in that outing, it was the trio of Carlson, Cookerly and Ketcham as well.
- Valpo earned the win on Friday evening despite committing 38 attack errors (17 of which were Loyola blocks), the program’s highest single-match total since Oct. 28, 2011. It also matched the most attack errors by a Valpo squad in a victory in the 25-point era, tying a 3-2 win against Louisville on Sept. 5, 2008.

Next Up
Valpo (18-3, 5-1 MVC) takes a breather before jumping back into Valley action next Friday night at Illinois State at 7 p.m. That match will be broadcast live on ESPN+.