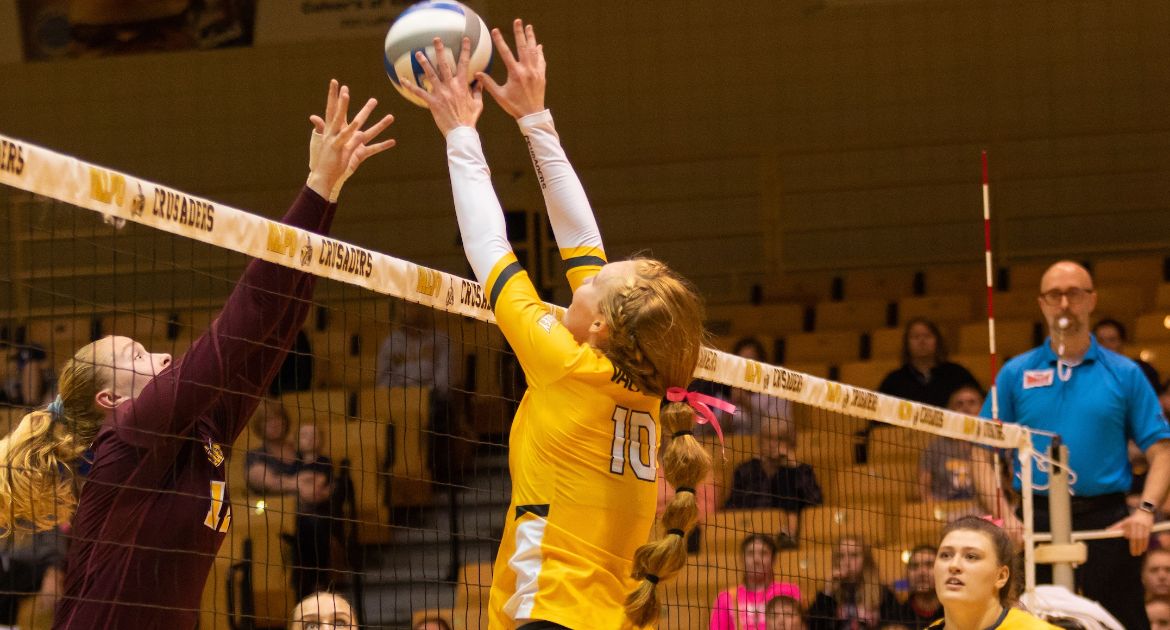 This Week in Valpo Volleyball: The Valparaiso University volleyball team faces a key road trip this weekend against a pair of top-four MVC opponents. Valpo takes on an Illinois State squad which sits in a second-place tie with the Brown and Gold Friday evening before facing off with Bradley Saturday night. Valpo enters the weekend just two wins shy of 20 for the season.

Previously: Valpo rallied from down two sets last Friday night to earn a 3-2 win over Loyola to improve to 18-3 overall and 5-1 in MVC action.

Looking Ahead: Valpo returns to the ARC next weekend to host Evansville and Indiana State.

Following the Action: Both matches this weekend will be broadcast as part of the season-long package with The Valley on ESPN, with the Illinois State match airing live on ESPN+ and the Bradley match on ESPN3. Live stats will be available as well.

Head Coach Carin Avery: In her 17th season as head coach at Valparaiso, Carin Avery has won 389 matches (389-170, .696) at the helm of the Crusaders and has led Valpo to three league regular season and tournament titles, as well as three NCAA Tournament appearances. A two-time league Coach of the Year, Avery has coached 55 All-League recipients over her tenure at Valpo. She is Valpo’s all-time leader in both victories and winning percentage, and owns 444 career victories overall as a head coach.

An Epic Rally: Trailing by two sets against Loyola on Friday, Valpo came all the way back, winning the third and fourth sets and then erasing an 11-9 deficit in set five to earn the 3-2 win over the Ramblers. It was just the second time under head coach Carin Avery that Valpo had won at the ARC by a 3-2 final after trailing 2-0, joining a Halloween 2009 win over Oakland. Overall under Avery, Valpo has only trailed 2-0 96 times - Valpo has forced a fifth set in 17 of those matches and won the match nine times. On the flip side, Valpo has led 2-0 260 times under Avery and has only been taken to a fifth set 13 times in those matches, losing only six times.

Best Start in Program History: The 2018 volleyball team is just the second in program history to sit at 18-3 through 21 matches, joining the 2004 squad. That year’s team, which would go on to start 20-3 before suffering its fourth defeat, ended the year 29-5 overall and advanced to the NCAA Tournament.

Approaching 20 Wins: Valpo enters this weekend just two wins shy of 20 for the season, a mark which the program reached every season from 2002 through 2015. Valpo is also one of just three teams in the nation with 18 or more victories. Stephen F. Austin currently leads the way with 19 wins, while both Valpo and Pitt own 18 victories.

Strong Start in Conference: The win over Loyola improved Valpo’s record in MVC play to 5-1 through six matches, the sixth time under Avery that Valpo has won at least five of its first six conference matches of the season. The 2009 and 2013 teams both opened Horizon League play 8-1 before taking their respective second losses, while the 2003-2005 teams went 13-1, 14-0 and 13-1, respectively, in Mid-Continent Conference action.

RPI Ranks: Valpo moved up two spots in this week’s RPI rankings as released by the NCAA, currently checking in at 53rd nationally. Valpo is one of three MVC squads in the top-65, joined by UNI (16th) and Illinois State (61st). Valpo has posted a top-100 RPI finish just three times in the tenure of head coach Carin Avery, and not since 2008 (67th). Valpo’s best-ever RPI finish came in 2004, when it clocked in at 55th position.

Among the Nation’s Best: Coming into this week, only Northern Arizona had racked up more total digs than Valpo, as the team sits at 1,418 digs through 21 matches. Valpo is also seventh in total kills, seventh in total assists, seventh in digs/set, eighth in opponents’ hitting percentage and 14th in win/loss percentage. Individually, Brittany Anderson sits 36th in assists/set, Peyton McCarthy 36th in blocks/set, and Rylee Cookerly 42nd in digs/set.

McCarthy Shuts Down Hitters: After registering just 16 blocks in 48 sets played last season as a freshman, sophomore middle Peyton McCarthy has come into her own this season as a defensive force at the net, entering the weekend leading the MVC and ranking 36th nationally with 1.29 blocks/set. McCarthy, who is just 11 blocks shy of hitting 100 for the season, tallied a career-best nine rejections last time out in the win over Loyola to help Valpo to the come-from-behind win.

Anderson Sets Things Up: Sophomore two-sport standout Brittany Anderson has been the catalyst for Valpo’s offense this season, playing every point at setter and averaging 10.74 assists/set, good for second in The Valley. Last time out, Anderson set a season best with 56 assists and set a new career high with six kills in the win over Loyola. Here’s how Anderson performed against this week’s opponents last season in both volleyball and softball:
Illinois State - 10.17 assists/set, 3.08 digs/set; 1-for-9, R, HBP
Bradley - 10.33 assists/set, 2.17 digs/set, 0.83 blocks/set; 2-for-6, R, HR, 2 RBI, BB (.333/.429/.833)