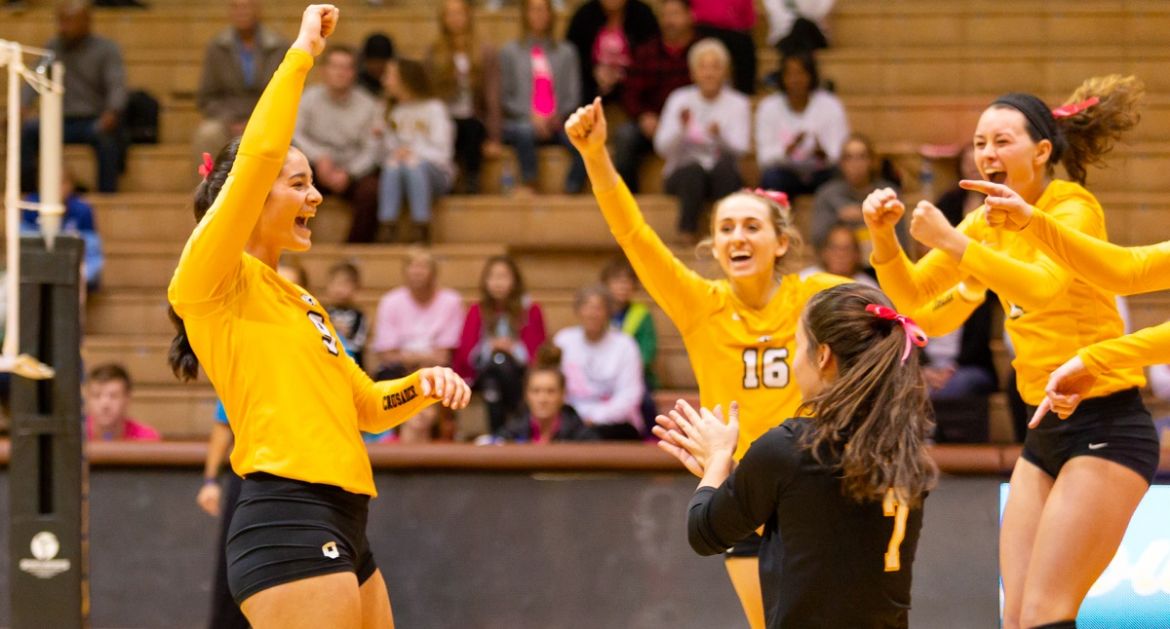 This Week in Valpo Volleyball: The Valparaiso University volleyball team faces a key stretch of three matches in four days this weekend, traveling to take on UNI and Drake on Friday and Saturday, respectively, before returning home and hosting Missouri State Monday evening.

Previously: Valpo didn’t let injuries slow it down last weekend, as despite playing with just one healthy middle, the Brown and Gold came out with wins over Evansville (3-1) and Indiana State (3-0).

Looking Ahead: After a heavy weekend this weekend, it’s a light slate next weekend, as Valpo travels to Loyola on Friday, Nov. 2 for its only match.

Following the Action: All three matches this weekend will be broadcast as part of the season-long package with The Valley on ESPN. The Drake match will be on ESPN3, while the UNI and Missouri State matches will be on ESPN+. Live stats will be available as well.

Head Coach Carin Avery: In her 17th season as head coach at Valparaiso, Carin Avery has won 391 matches (391-172, .694) at the helm of the Crusaders and has led Valpo to three league regular season and tournament titles, as well as three NCAA Tournament appearances. A two-time league Coach of the Year, Avery has coached 55 All-League recipients over her tenure at Valpo. She is Valpo’s all-time leader in both victories and winning percentage, and owns 446 career victories overall as a head coach.

Figuring Out a Way to Win: With nearly 400 wins to her credit at Valpo, head coach Carin Avery has had to come up with game plans to overcome a myriad of obstacles in her time at the helm of the Crusaders - most notably in 2016, when the team played the final 13 matches of the year with its libero as the primary setter and went 7-6.

Last weekend, it was framing a lineup around only one healthy middle, freshman Haley Hart. Instead of forcing another hitter to play out of position in the middle, Avery and her staff devised a plan to play a pair of right side hitters opposite each other in the rotation (with the libero playing back row for both) and have setter Brittany Anderson play opposite Hart and block middle in her three rotations up front.

The result was two victories (3-1 over Evansville, and 3-0 over Indiana State) in which both sides of the ball performed well. Valpo hit .244 as a team with better than 13 kills per set in the pair of wins. Defensively, Valpo limited its opponents to .124 hitting and averaged 2.36 blocks/set - better than its season average entering the weekend.

Cummings Steps Up: As one of Valpo’s two right sides in the lineup last weekend, Ally Cummings took full advantage of the playing time, as she hit over .500 in both wins and led all players in kills in both matches en route to MVC Player of the Week honors. Cummings kicked off the weekend with a career-best 17 kills on .517 hitting in Valpo’s four-set win over Evansville, while also tying her career high with five blocks. Then, against Indiana State, Cummings led all players with 13 kills on .524 hitting in the sweep. For the weekend, the sophomore averaged a team-best 4.29 kills/set on .520 hitting. She became the first Valpo player to hit .500 (minimum 12 kills) in consecutive matches since October of 2008, when Allison Sears did so in wins over Butler and IUPUI.

From A(nderson) to Z(aleski): The play of sophomore Brittany Anderson and senior Lizzie Zaleski also proved key in Valpo’s wins last weekend. Anderson averaged 10.86 assists/set and more than doubled her blocking average while having to block in the middle, posting 1.14 blocks/set. Meanwhile, Zaleski tallied 2.71 kills/set on .255 hitting and also added five blocks over the two matches.

Another 20-Win Campaign: The pair of wins last weekend gave Valpo 20 wins this year, the 15th time in Avery’s 17 seasons that Valpo has won 20 or more matches. This year marks the seventh time out of Avery’s 15 20-win teams that the program has reached 20 wins within the season’s first 25 matches.

RPI Ranks: Valpo still sits in strong position in the latest NCAA RPI release, coming in at 62nd nationally. Valpo is one of three MVC squads in the top-65, joined by UNI (20th) and Illinois State (40th). Valpo has posted a top-100 RPI finish just three times in the tenure of head coach Carin Avery, and not since 2008 (67th). Valpo’s best-ever RPI finish came in 2004, when it clocked in at 55th position.

Among the Nation’s Best: Entering this week, Valpo ranks fourth nationally in total digs and eighth in digs/set, looking for its ninth straight season of placing among the top-20 in the nation in the latter category. As a team, Valpo also sits 18th in opponents’ hitting percentage and 22nd in win/loss percentage. Individually, Brittany Anderson ranks 40th in assists/set and Peyton McCarthy is 46th in blocks/set.

Cracking the Top Ten: The head-to-head battle for the most career kills between seniors Katherine Carlson and Allison Ketcham will soon be a battle for positioning on Valpo’s career top-10 chart in the category as well. Carlson and Ketcham, who both already rank among the top-10 in program history in another statistical category (Carlson - aces; Ketcham - digs), should both surpass the current holder of 10th place - Morgan Beil; 1,099 kills - this weekend, as Carlson enters the weekend with 1,092 kills and Ketcham 1,090. Once both hit 1,134 career kills, which is the current ninth-place mark of Sarah Dooms, they will both be within the top-10, making them the only classmates to both sit in the top-10 of the category.